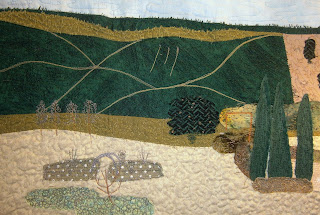 ....that last week when I thought that I was almost done with this wall hanging that I believed it.

I'm also pretty sure that the right order is to complete the stitching on it before blocking and trimming it.

But is that what I did?  NO!  I blocked it.  I trimmed it.  I laid it down on the floor whilst I worked on something else - but it kept catching my eye.  The section of background was too dark, and the other trees weren't standing out against it. 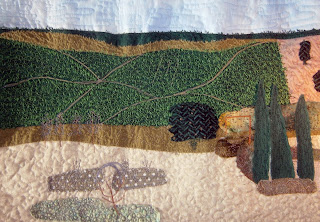 What to do?  I threw caution to the wind and covered it in two directions with a paler thread and a decorative stitch.

Can you see the difference between to the two shots, one before, one after?  I'm pleased with the lightening up of the areas, I think.

Idea for using a decorative stitch like this gleaned from looking at some of Anne Kelly's work.... 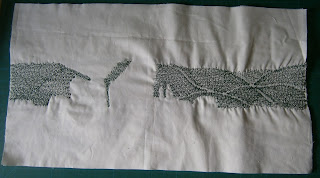 Of course, I've now got more lumps and bumps to deal with.  It needs to be blocked again, and it will be with hope rather than expectation that I will actually able able to get it to lie flat once more.