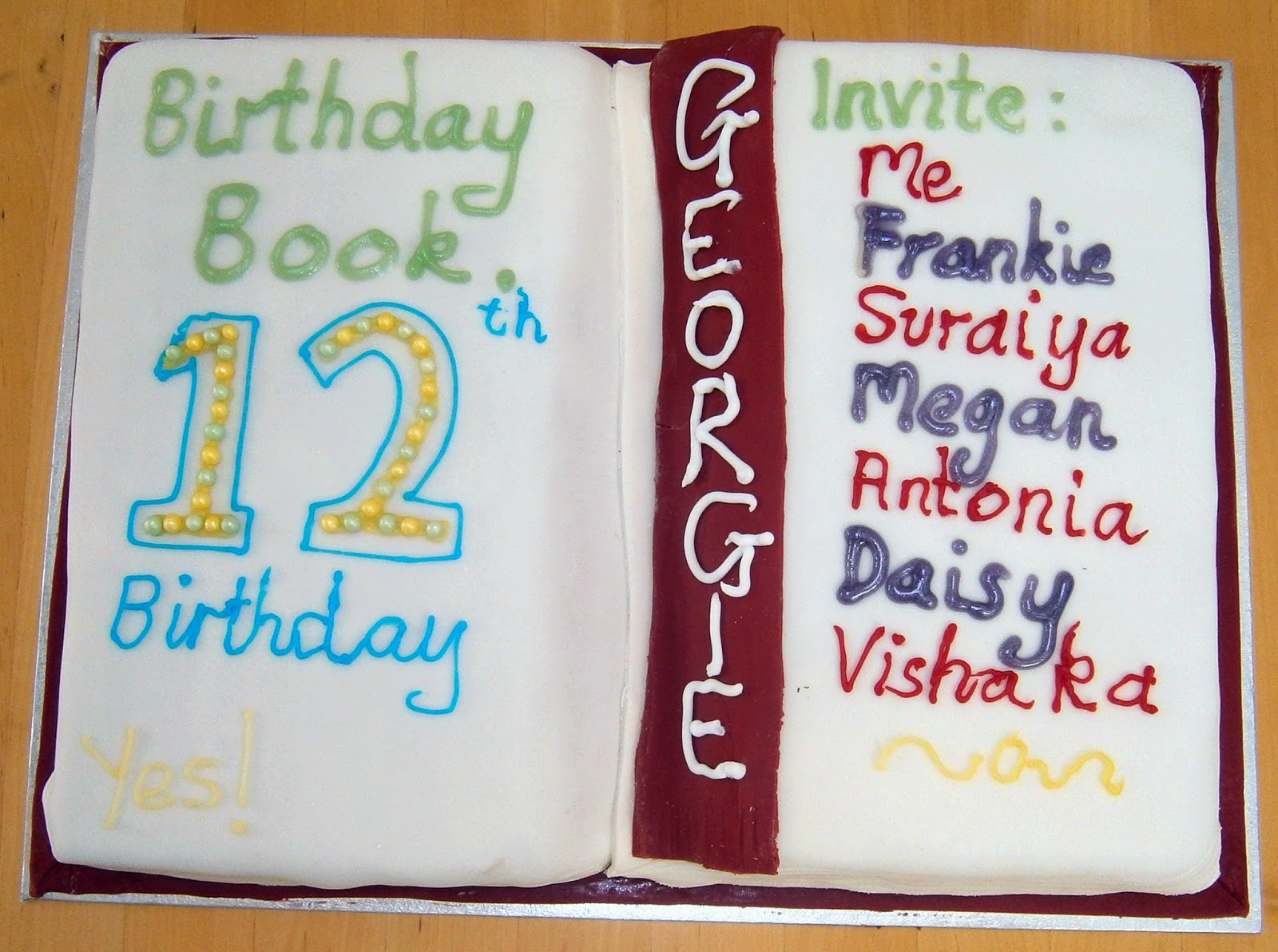 DD1 turned 12 this week - almost unbelievable!  She had a book themed party, so the cake had to be a book too, of course.  I was quite pleased with how this one turned out (and glad that I hadn't spent the £15 on an open book shaped cake tin - my old faithful rectangle tin and a bit of carving with a bread knife did the job!). 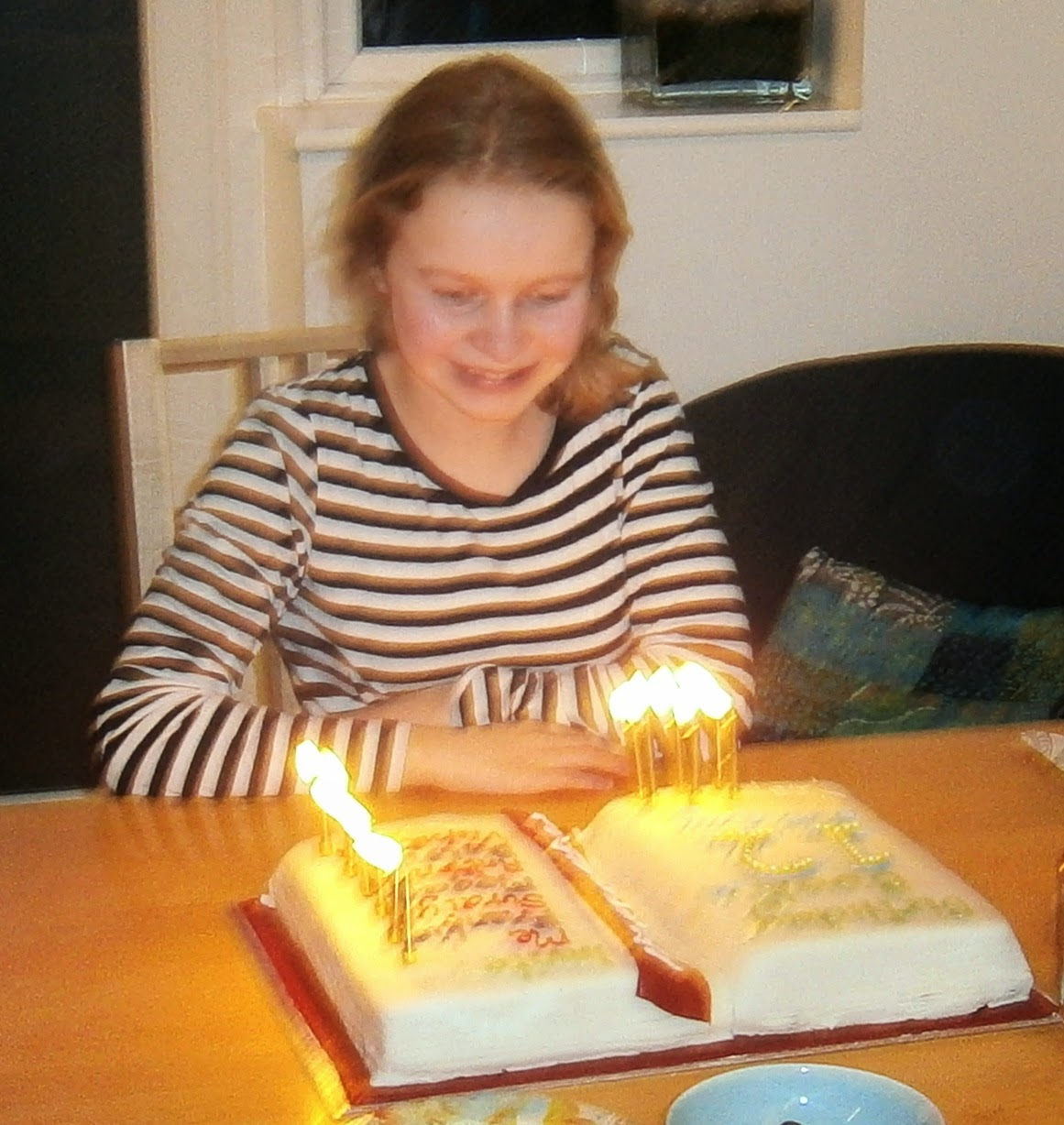 I'm so pleased that she was thrilled with it.  Four days on and she still hasn't actually tasted it - turns out that she'd rather have crisps if she's being offered junk food!  Fair enough! 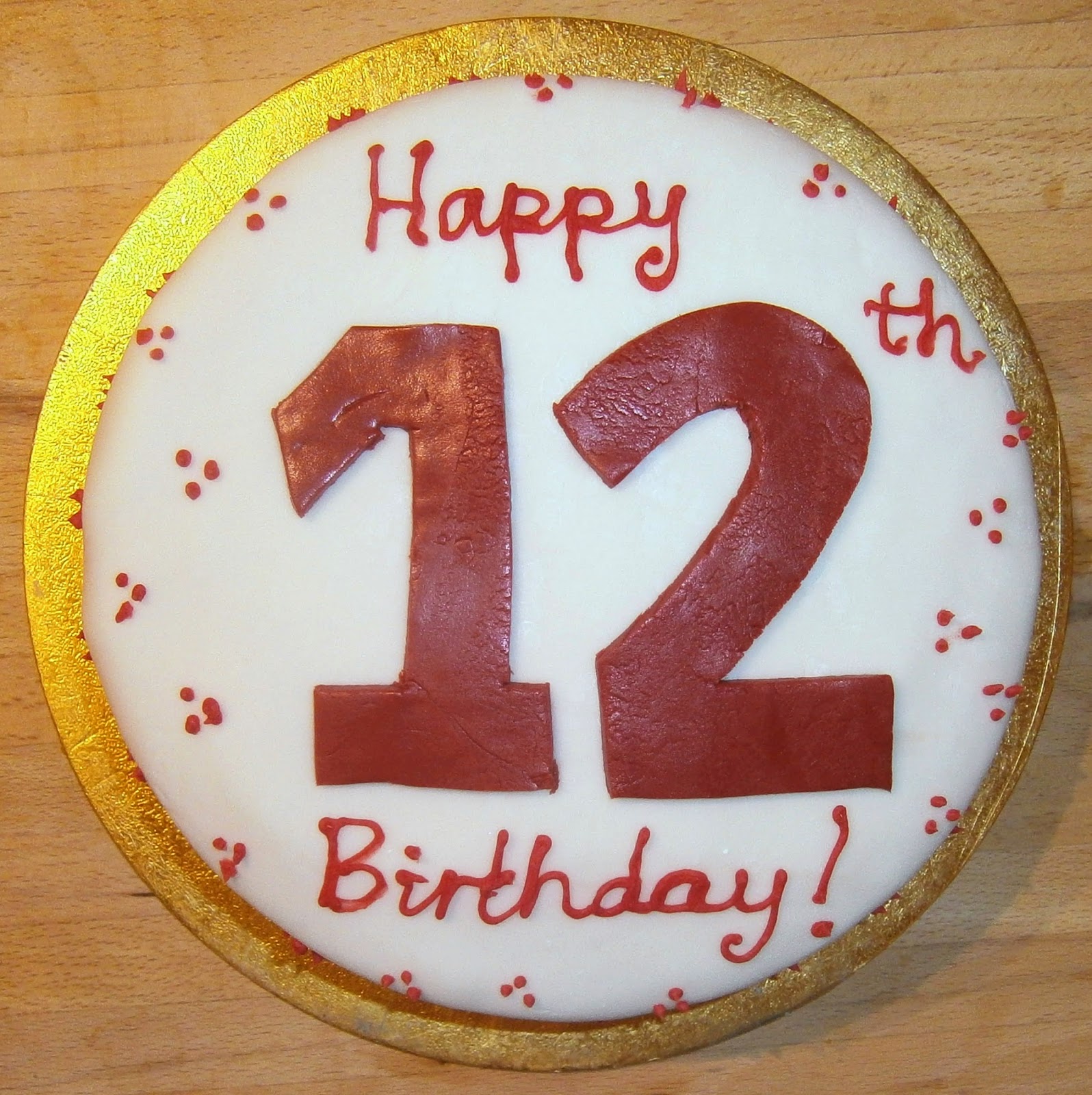 Of course, refusal of chocolate cake didn't mean that I was going to let up, so on her actual birthday she had a lemon cake.

She was equally thrilled, but, of course, hasn't actually eaten any of this one either!

I've managed to give quite a lot away, but I think that we'll have a cake section in the freezer for a while to come. 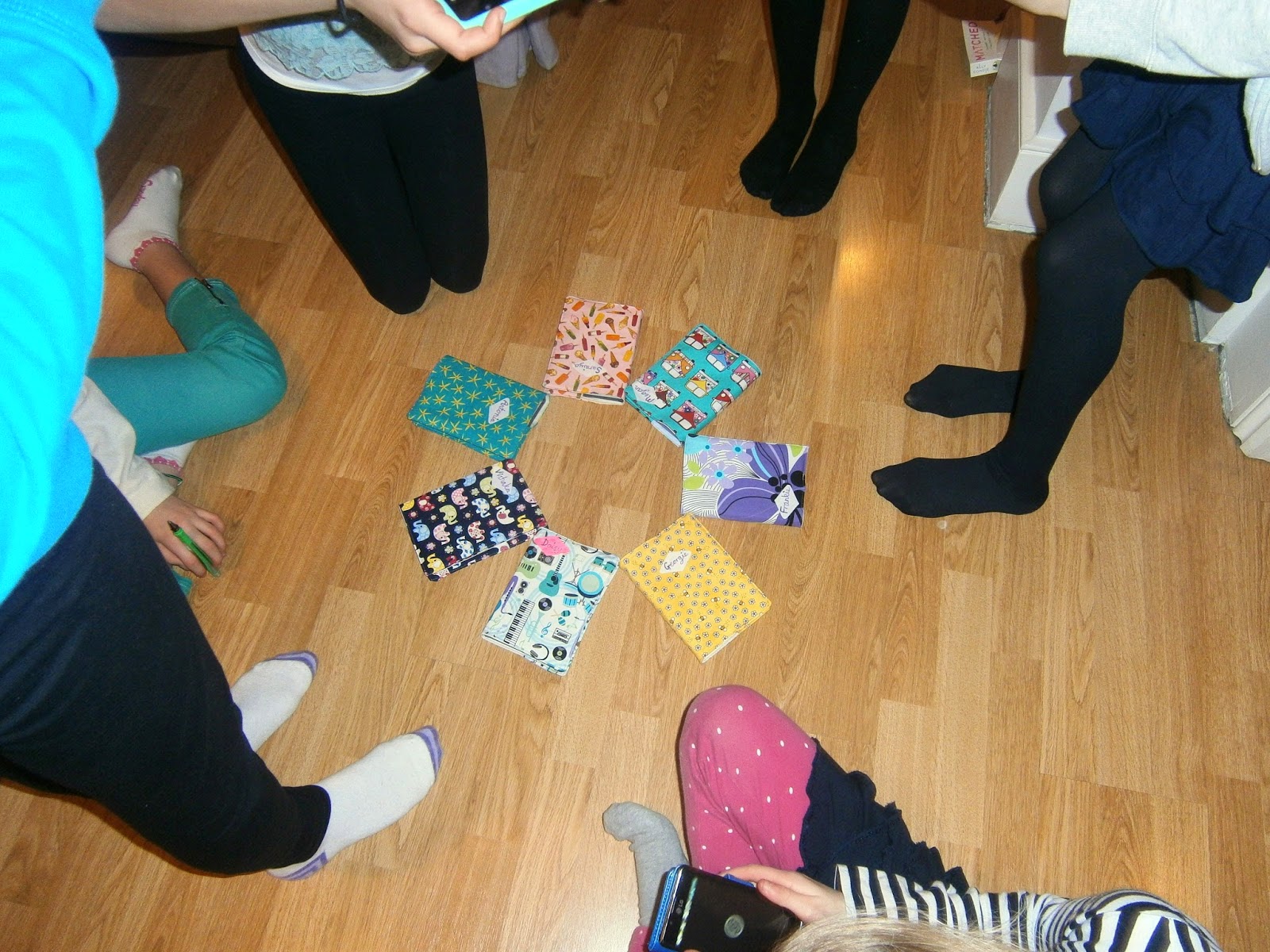 Naturally we couldn't have a party without an element of crafting.  The seven girls made fabric notebook covers (fun, as some of them hadn't used either a sewing machine or an iron before!).

After we'd stopped sewing we made 'no fastener' books from a single sheet of paper - one from A4 paper, one from 12" square paper - and got the stickers and pens out to decorate them.

I think it's lovely that these young people are so keen to craft and create and chatter whilst they do so.  I hope that they are developing life long habits, but even if they aren't, I'm glad that they are enjoying the moments now!
Posted by Plum Cox at 11:20:00 4 comments: 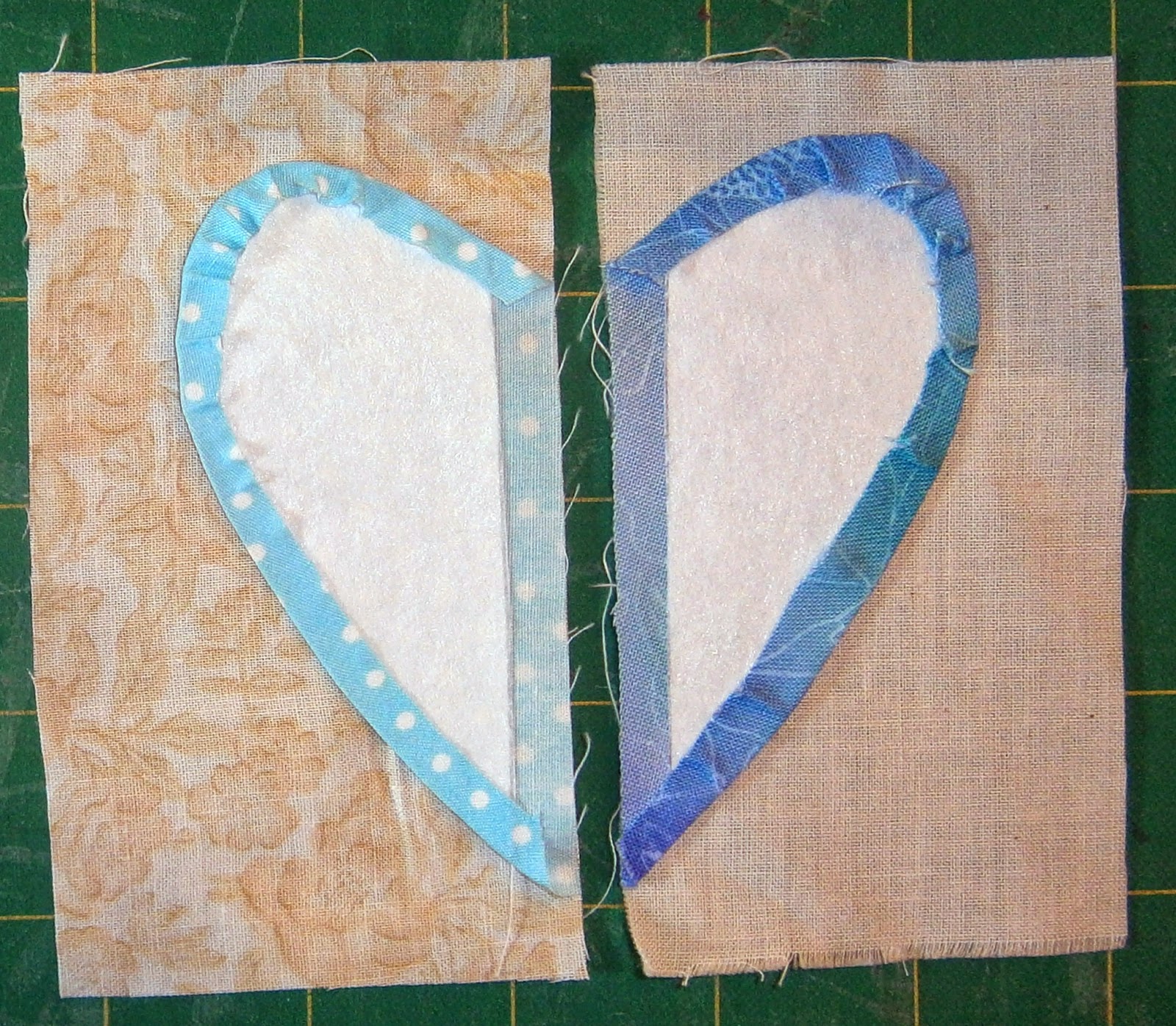 I've been carrying on trying to work through my scraps.  I'm making 'Heart It' by Esther Aliu but hit a bit of a problem when my wrist became even more painful than it had previously been.

Its no fun when you are a quilter who can't hand sew, use scissors, use a rotary cutter or machine quilt - it's just very, very frustrating!

However, I've managed to subcontract the first round of scissor cutting to a local teenager, I've bought an ergonomic rotary cutter and I'm the proud owner of two different types of crafter's support gloves! 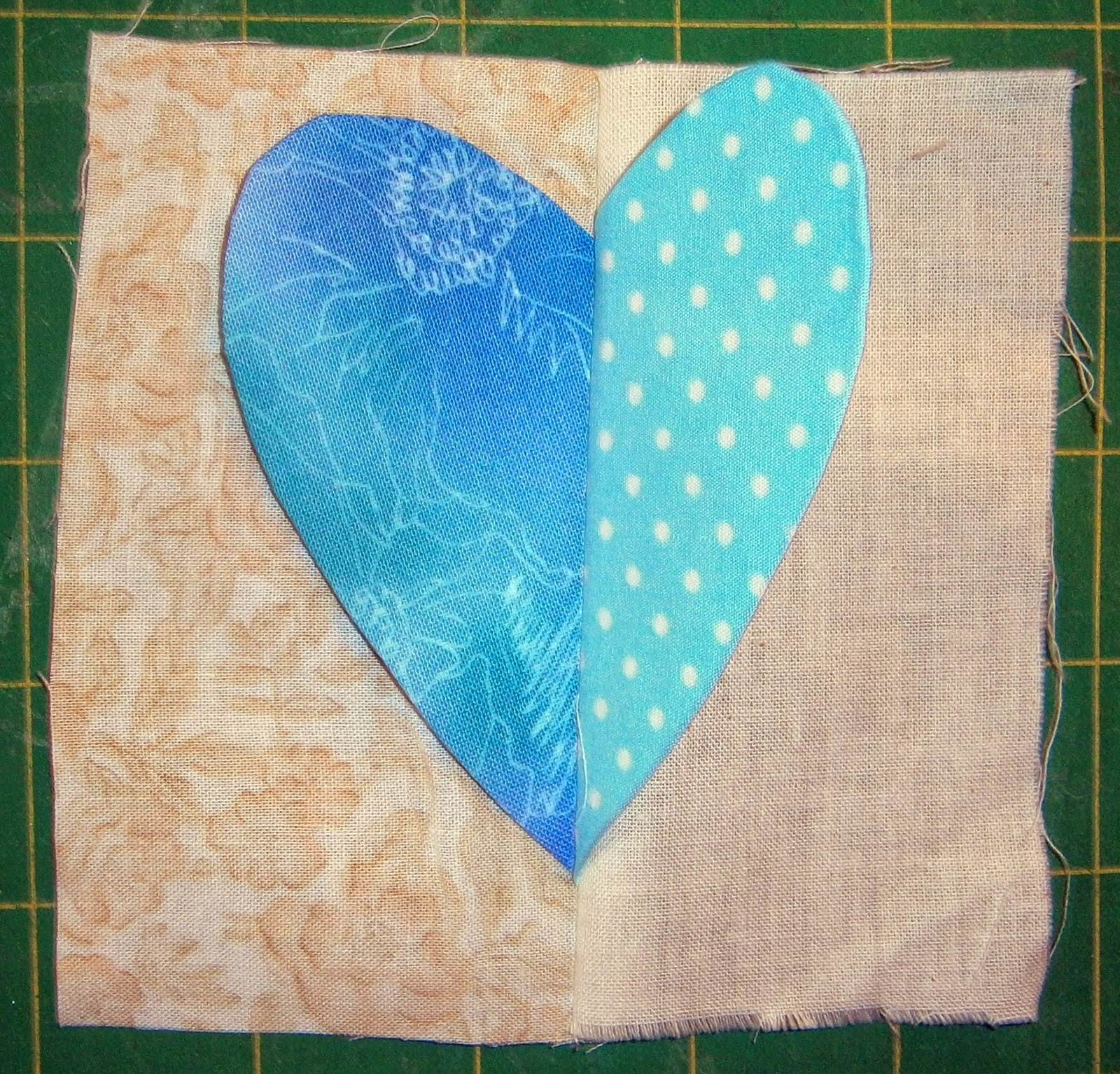 So, rather than setting up blocks for some gentle hand sewing, I'm going to be making machine applique blocks instead.

More than one way to skin a cat or indeed make a quilt!

My heart halves are glued onto Floriani fusible, the seam allowance glue sticked down, and then lined up on two pieces of background fabric. 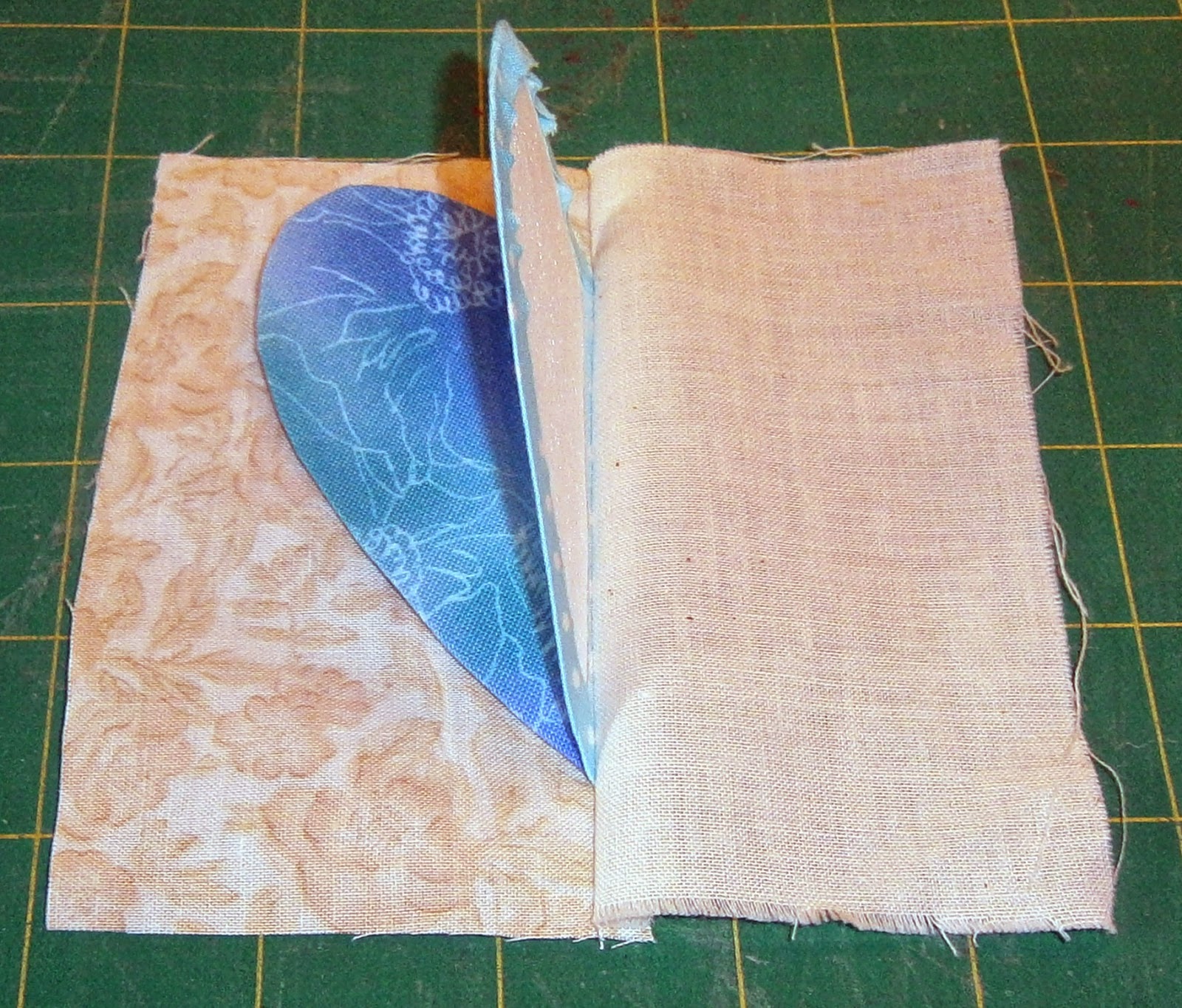 You see it here with the centre of the heart sewn into the background, leaving me just the outside edge to sew down.  it will be a small zig zag stitch in grey, I've decided.

It's awfully tempting to make one or two of these heart halves double -sided, though, so that they could lift off the fabric like this one (but looking more finished, obviously!).

It would tie in nicely with the dimension that the 3D bowties will give to the other blocks..... certainly something to think about.


My only other crafty endeavour over the last couple of weeks was with some young crafting companions (My DD's and a neighbour).

We were all much struck by the idea of making yarn bomb 'cherries' (pairs of pom poms) and letting them 'fruit' in a local park on Twickenham riverside.

They made the pom poms (new pom pom maker gadgets making this SO MUCH FASTER than the old fashioned 'two cardboard circles' way) and we took them to the park.  We hung them up and almost immediately there were children trying to hit them with tennis racquets and a pair of old ladies talking about making pom poms when they were children.

We went back to take them down a fortnight later (pleased to say that cheap acrylic yarn worked splendidly, having thrown off all the weather that had happened).  There were still children interested in them (who were THRILLED when we gave them the pom poms as we took them down!).  It made us all feel good, that we'd achieved 'yarn bombing', that we hadn't left any to become litter, and that they made other people happy too!

Of course, if you saw them and were appalled during the two weeks that they were around I can only apologise.....but I'm really hoping that wouldn't actually apply to anyone.

Right.  Onwards and upwards.  I'd like to think that my wrist is starting to get a bit better - cross your fingers and send me a good wish, please! 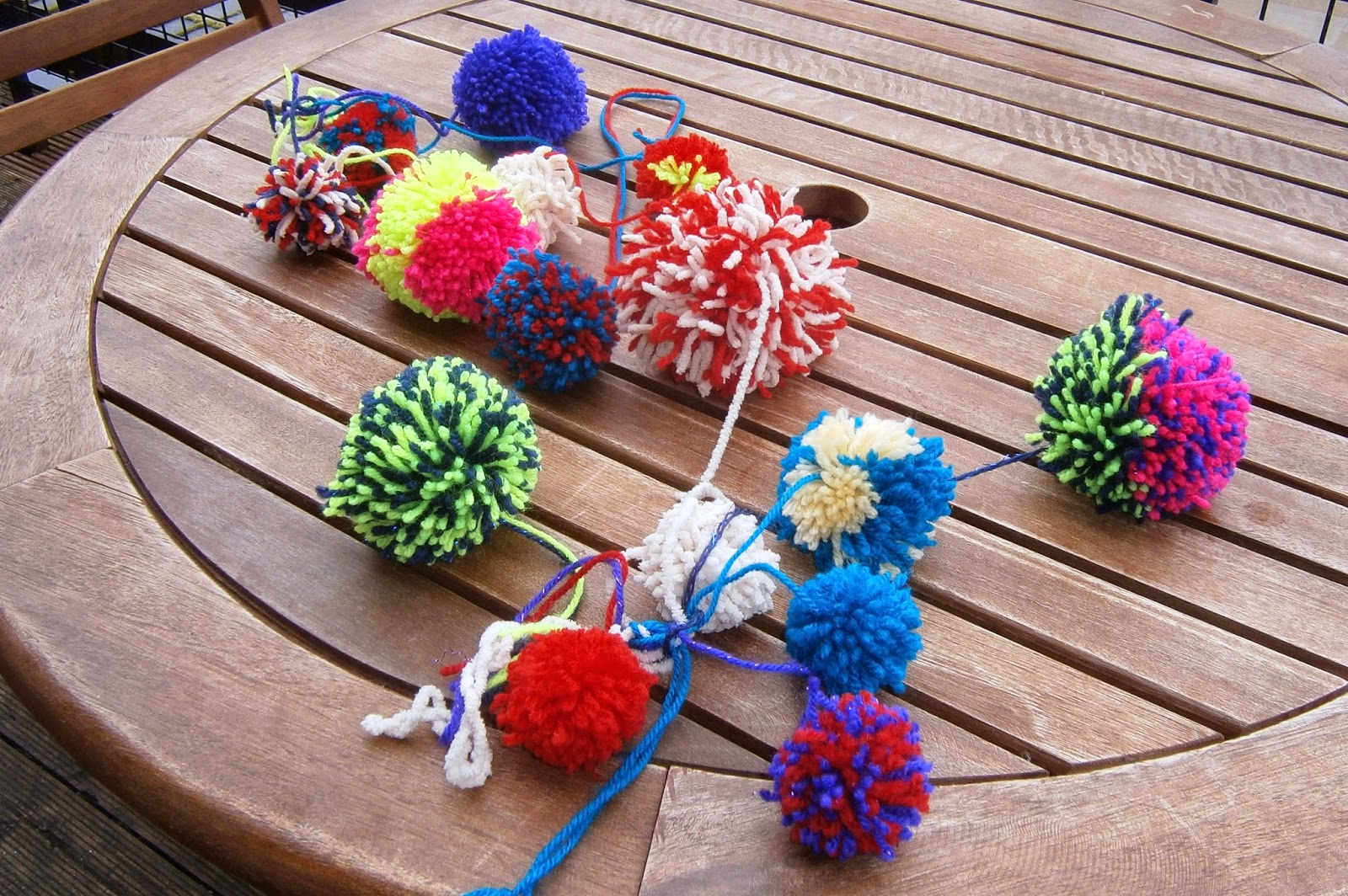 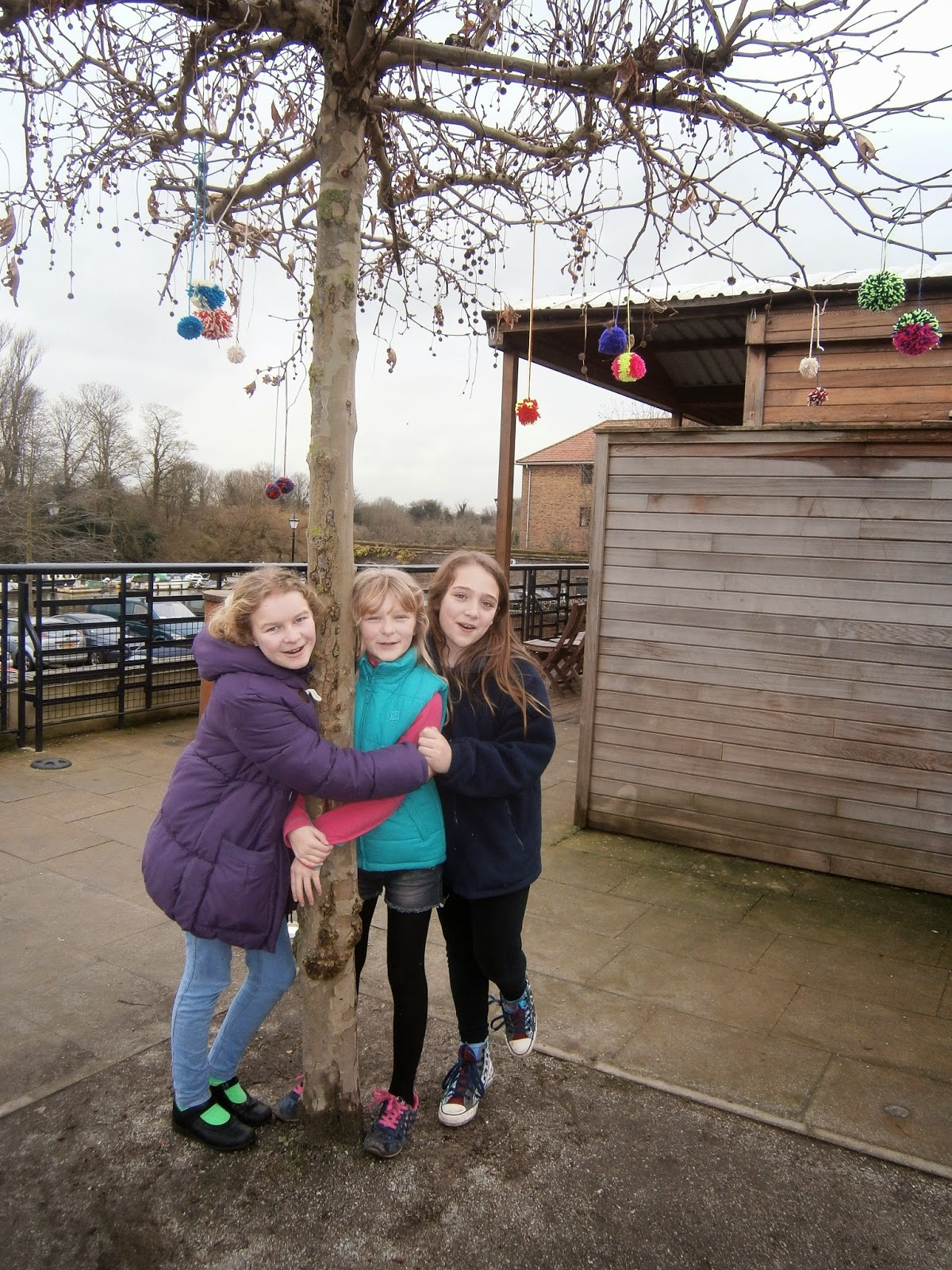 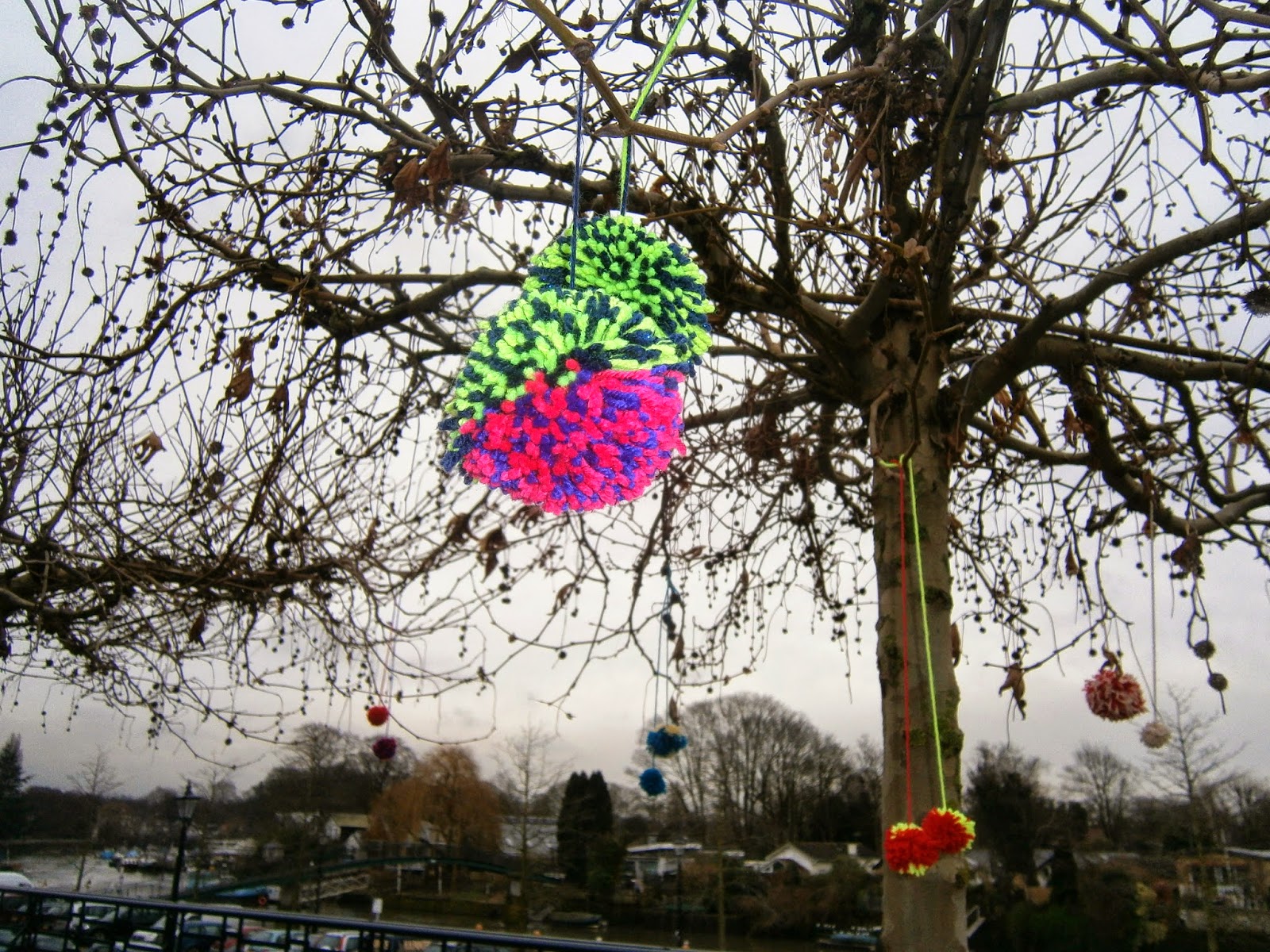 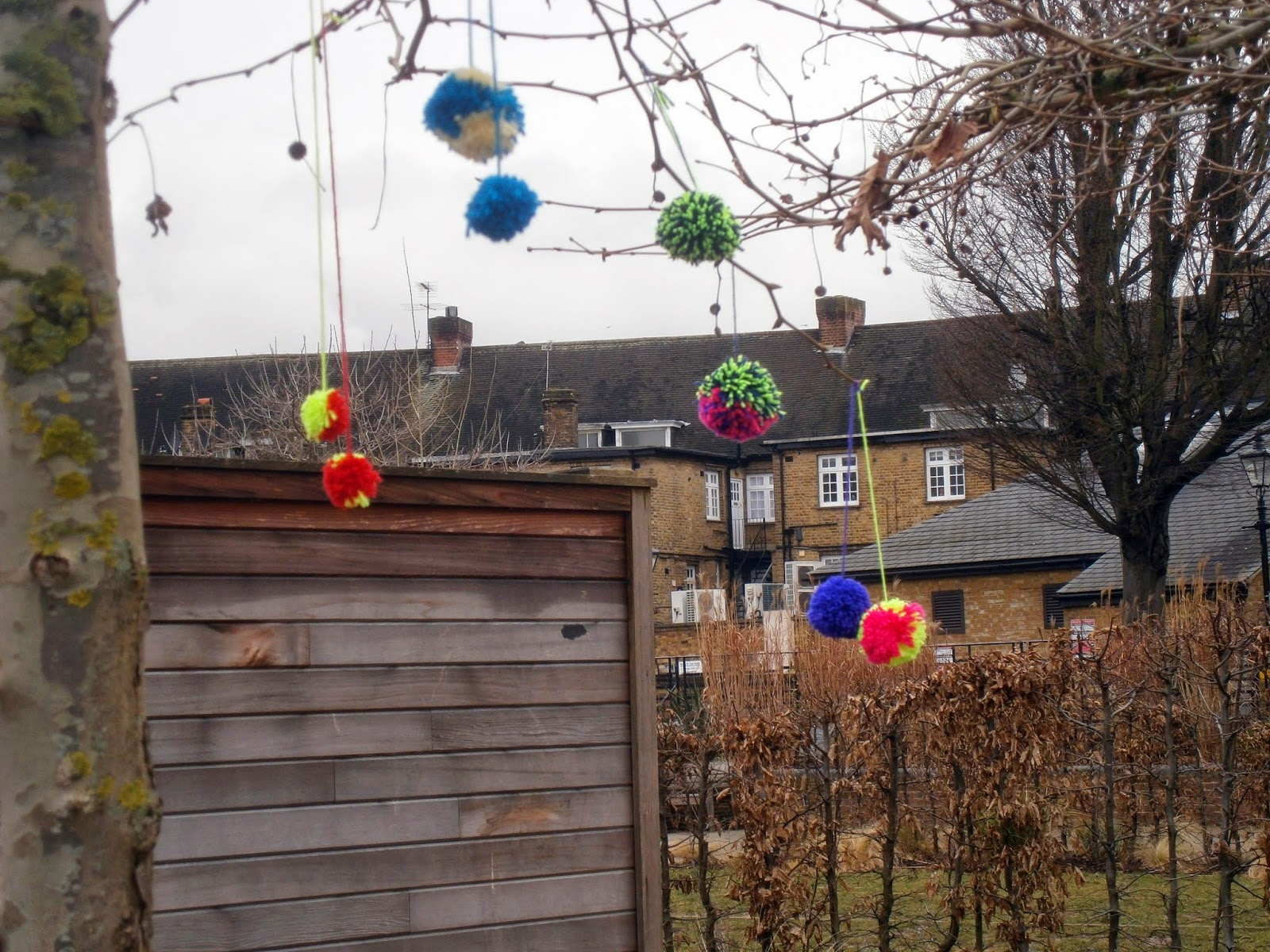 From Scraps to Riches


I'd planned a lovely post today - rich with photos of the piles of scraps that I've been hoarding in various different places and containers - and then showing how I'd managed to come close to constraining them.  However, my computer is at the menders (again) and I'm using one that doesn't appear to want to play nicely with Blogger, so photos will have to wait!


I can share the (unillustrated) news that I have LOTS of scraps!  So many that I've decided that this should be the year of the scrap project for me.  I really have to face up to sorting them out properly and using them or giving them away.  What isn't working well is being proud of being organised (I've got labelled plastic drawers, ergo I must be organised) whilst shutting my eyes to the other shoeboxes, piles and folders full of scraps that had accumulated whilst I wasn't concentrating!


I know that storage and use of scraps is a perennial quilting discussion.  I know that everyone has a theory about what would work best.  Organise by colour? organise by shape? Organise by theme? Organise by size?  Organise by destination project?  You may have a favourite, you may have a couple of favourites.  I think that I'm going to try and work through what I have now (mostly organised by size) and then think about changing (perhaps to organising by colour).  Of course, in the ideal world where my ship has come in, I will have someone on hand to organise and iron my scraps for me, and perhaps even to cut them into regular shapes!


So, have any of my scraps turned into riches between last week (me starting to tidy them) and this week (me starting to make a quilt)?  Yes!  Well, almost.  I have made a quilt top using some left over jelly roll strips (probably the easiest scraps to use!) with some larger pieces of background fabric left over from one of last year's quilts and then a second, smaller, quilt top using the left overs from the first quilt.


Not quite finished yet, as I need to raid the drawer for narrow pieces to make lovely scrappy bindings.


I'm also planning to make a scrappy version of this new pattern by Esther Aliu - Heart It.  I was hoping to prepare the pieces and hand sew it, but a couple of hours of hand quilting (nearly two weeks ago!) have shown me that I still can't manage much in the way of hand work, so this will have to become a machined piece too if I want to make progress on it.  I wish that I could find something to do with my hands in the evenings that didn't hurt at the moment - I feel bereft without a little hand sewing on the go!


Now, look away if you don't want to hear a little brag.  I was surprised to find an article by me in a magazine that's out now - not that I hadn't been invited to submit something via SST - my distance learning college, but that I'd dashed it off last summer and not given it another thought since!  The magazine is called 'Be Creative with Workbox' (issue 148).  I can't say that my article adds greatly to the sum of human knowledge but I'm still pleased to see it there.  I only regret that I didn't send a photo of the quilt that I was most proud of making during my course - a wall hanging based on 'radio' - a bit of an oversight!


Time to go an make bindings now!  Fingers crossed that next week I'll be back on my own computer with appropriate photos!
Posted by Plum Cox at 11:59:00 2 comments: