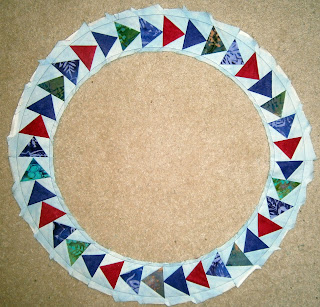 The flying geese outer ring was the Aves 'block' of the week this time around.

Fun to make.  You can see where I sewed lines (from behind, using the paper piecing lines) to show me where to sew it to the inner wheel and later to the rest of the quilt top.

I think that next time I'll do it without any thread, just leaving me the holes in the fabric to guide me. 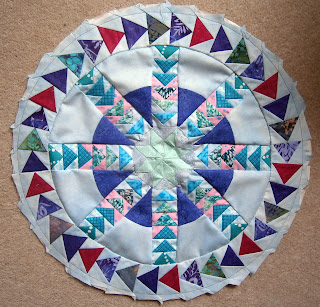 Here it is sewn to last weeks 'spokes' to form a complete roundel.

I should have pressed it before I took a photo really! 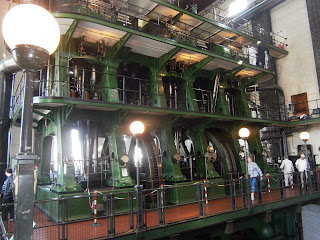 More great wheels here at the Kempton Steam Museum which was in steam last weekend (and will be again for another five weekends or so during the year - if you can get to south west London to see it I'd recommend it!).

Magnificent and on a scale bigger than I'd realised.  This triple expansion steam engine is about 6 stories high - and the two fly wheels that you can see here are 32 tons each!  Apparently they were made in two halves, and the maximum weight that could be carried on the railway wagons of the time was 16 tons.  Fascinating stuff. 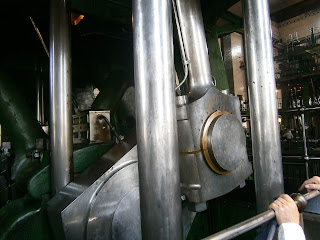 Immense scale.  My photos don't really do it justice I'm afraid.  If you can, do go along and see it in steam. 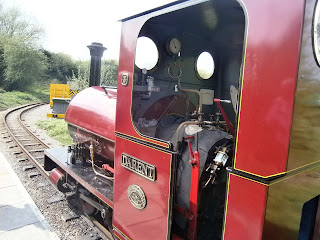 Alongside the steam museum is this separate attraction - Hampton and Kempton Waterworks Railway.  Cute little steam engine (working every Sunday afternoon and museum weekends from March until November).  They are using this to promote / provide experience for an exciting project, which is to relay track from here to Hampton following the old track which was laid in WW1 to provide easy access to coal brought up the Thames.
A laudable project and one that I'm fully in favour of! 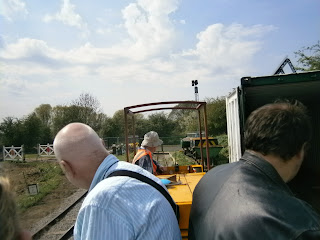 Not mentioned in any leaflet that I've seen, my personal favourite on the day was an 'extra' trip on a diesel 'man mover' - something that I've never tried before.

We didn't spend a lot of time at these attractions, but I've come away inspired to try and use some of the aspects of them in a quilt design.
Posted by Plum Cox at 15:20:00 2 comments: 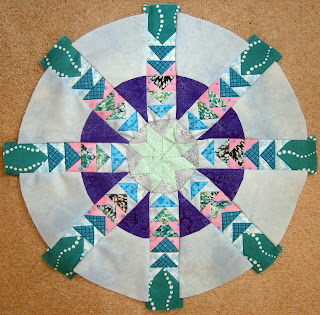 Well, flying geese spokes anyway!  Week 12 of the Aves BOW.  I didn't follow the careful instructions of Kathryn Kerr this week, but once I'd got the pie shapes and the flying geese spokes and the centre star I decided to ignore all the 'Y' seam possibilities and applique the central star to the rest of the roundel.  I confess that it isn't perfect, but it's good enough for me to smile and move on to the next part, which is to make a flying geese border for it.  Happy days! 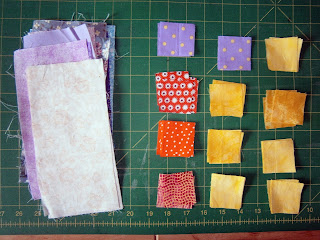 I also started a lozenge quilt - back to my scrap bag using-it-up theme. 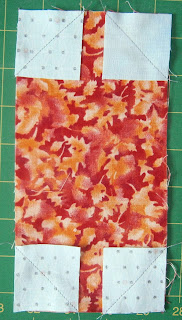 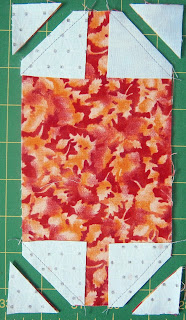 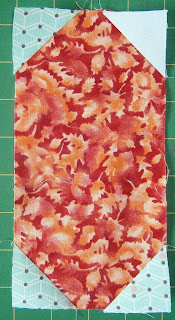 Folded the corners back and ironed them.

This has left me with a pile of lozenges - but no real design layout in mind for them!

Of course, I realise now that if I'd planned it out first that it might have been a better idea and that I might get a better result!  Lesson learned.

When I get some more sewing time I will play with layouts until I get something that works for me.  Always fun to play!
Posted by Plum Cox at 14:49:00 1 comment: 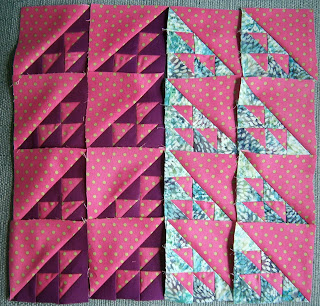 Another multiple block week for Aves BOMers.  This time we had to make  16 blocks, each coming out at 3 1/2" square.

As well as this we were encouraged to put the central area of our quilt top together - but for some reason I don't seem to have taken a photo of that!

More time spent on school holiday fun than on sewing this week! 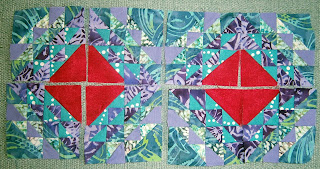 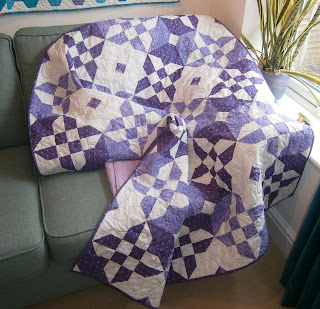 The 'proper' finish this week, though, was Betty's Quilt.

I'm really pleased with how it came out - even to having the perfect colour backing for it already in my stash!  It was a sheet gifted to me by a friend when she emigrated to Australia, just one of many pieces of household linen that has supported my quilting over the years!  Thanks Kate! 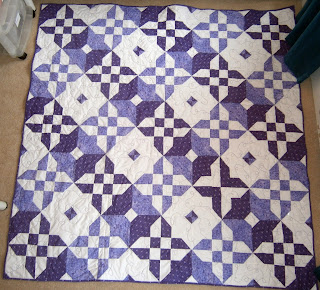 The quilt front finished at just under 60" square, which is a great size as a double bed topper or to snuggle under on the sofa.

I think that this might be a pattern that I return to - and I might even make a tutorial so that you could make one too if you wanted to. 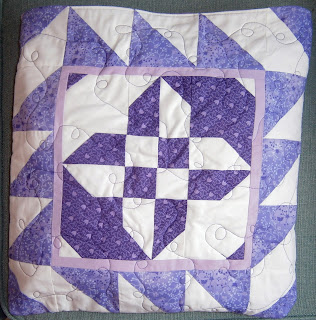 The cushion front - as I made the quilt into a quillow.

I used one of the blocks again, but used sashing and HSTs to make it up to 20" so that it would accommodate the folded quilt easily. 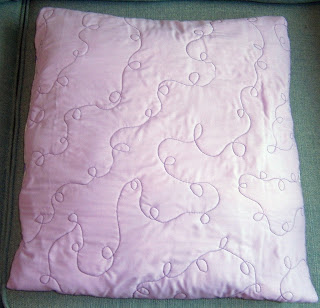 Fast quilting pattern as I was keen to make my self imposed finish date of Easter Sunday.

I'm pleased to say that I had it labelled, washed and dried in time to hand over as planned.  I'm even more happy to say that Grandma Greenwood, who had asked for it to be made and specified the colours, seems really pleased with it.  It will be gifted to her friend at the end of the month where I hope that it will be equally well received.

Off to start my next Aves blocks now - it looks like a big week as there are some mid point assembly instructions too - very exciting!
Posted by Plum Cox at 11:47:00 3 comments: