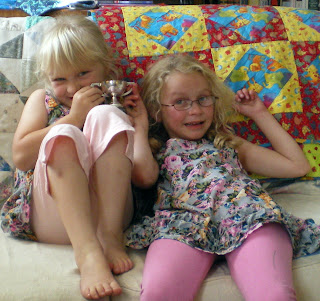 The show, held on Saturday, was lovely. Old fashioned 'village' show, with fierce competition over the dahlias, marrows. and so on. We like to enter a few categories, not for the glory so much as the joining in and spending a day with family who live in Kew.
I won a 2nd place for an applique cushion, but Pally won a brilliant 4th place for her cushion that she'd made using some of my stash (see this post). Aged 11 she was thrilled to beat some 'grown-ups' in the category.
My little stars did well. G won two well deserved second places and a commended, and F won first, second and fourth places - so they received noteworthy places in every category that they entered. F also won something a bit special - the Pat Thomas Cup for Children's Photography. At five years old she is the youngest ever winner, and we are very proud of her. It was worth the three minutes of letting her pull us into the right pose and the two shots that she took (the category theme was 'Family'). F has generously said that G can share the cup, as she was in the photo......
I should also say that Simon won a third place for his grapes, that I won a third place for my lemon curd, and that I had a block from my quilt group Round Robin earlier in the year included in another crafting category second place.
It's fun, and if you have a show in your local village or town then take my advice and join in - it's makes a great day!
Posted by Plum Cox at 09:48:00 5 comments:

Just a quick post to share the info that there is a chance to win a Go! cutter on Jackie's blog here.
Not that I know why I should tell you about it - after all, if you enter it will cut down my chances of winning.....!
Posted by Plum Cox at 08:54:00 2 comments: 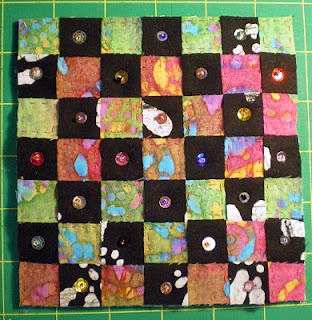 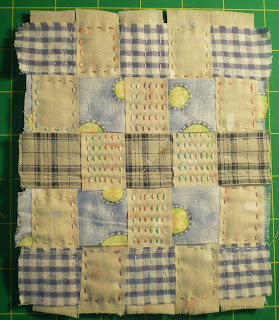 .....that there would be more little woven quilts!
I really like Fragments III (the second photo) - completely lifted by the lovely hand-dyed silk that I bought from Neredah McCarthy (how I wish that she had a web-site or an on-line shop, but I can't find one!). The colours are a little washed out in the photo, but they really are lovely. I also confess to having to use the back of two of the fabrics - my stash isn't renowned for gentle or subtle colours.
I really don't like Fragments II (the first photo), however. I tried cutting fabrics with a rotary cutter, and thought that bright batik against the dark one would look lovely - I was wrong. I added sequins and beads in the centre of the dark squares. That hasn't really helped. More stitching might help but I'm not the person who is going to bring this to life. If anyone reading this would like to try and breathe some life into it, please let me know and I'll send it to you.
Posted by Plum Cox at 18:02:00 1 comment: 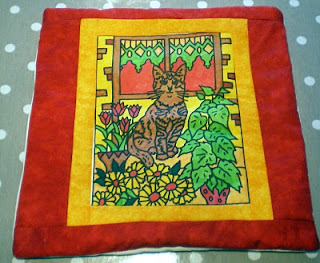 I took my sewing machine on holiday last week - and one of my wonderful nieces made this using a silk painting from a kit that she'd coloured. She chose wonderful fabrics to complement it (from my FQ stash, which also travelled with me) and then showed great control of the sewing machine to make this 'Quilt as You Go' cushion cover.

......but plenty of time with family in various guises!

Actually, in truth, last week I hardly managed any sewing, but this week I've managed a little sewing but (so far) no photos!

I've been working on some machine applique / piecing - both fairly simple - and later in the week will help one of my nieces to make a quilted cushion cover using a silk painting that she's produced. She's already chosen some stash fabrics for it.
Posted by Plum Cox at 21:31:00 No comments: 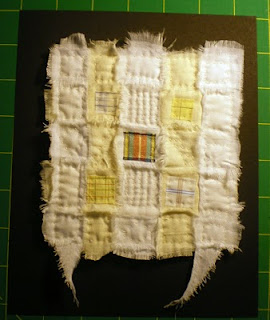 I'm quite pleased with this little quilt now that it's stitched. It's almost worth zooming in on the photo so that you can see the stitching properly - it's a piece that needs you to be up close and personal with it!

It's called 'Fragments I' and includes five little scraps of my late FIL's shirts. I'd like to get a shadow box to mount it into, but in the meantime I've adhered it to some black card.

I can see me making more of these - once the initial weaving is done it leaves easy hand sewing which I can do whilst the girls are engrossed in their own art and crafts.
Posted by Plum Cox at 05:56:00 1 comment: 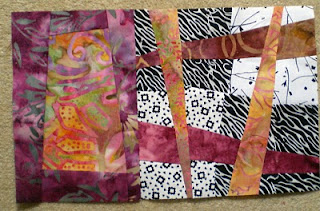 DH brought my sewing machine back from it's service today - hurrah! I celebrated with a few minutes sewing and made a simple Part 2 for Kate's SAH Robin. Quite simple as she says that we might like room for embellishing later.....
Posted by Plum Cox at 15:06:00 2 comments:

Cloth Base or Thread nest? 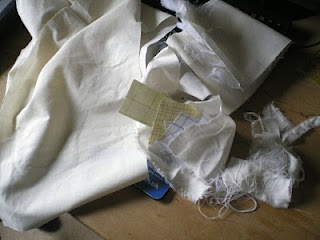 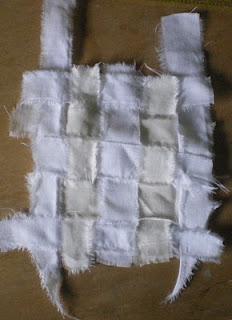 After a week with no stitching I was more than ready to tackle some textile again.
I read an article by Jude Hill about making cloth bases for small art quilts by weaving fabric strips. Hers looked gorgeous. Easy, I thought. I'll knock one out whilst the girls are Hama Beading next to me and I'll have something to stitch at tonight....... Hmm. As the above photos show, it's clearly more difficult (for me at least!) to get it right than one might have thought!
This was my third attempt at weaving these strips....and I'm still not sure that I'm happy with it! perhaps after some stitching an clever application of other fabrics it will improve. Otherwise I shall put it to one side and try again - it's just too lovely an idea for it not to work!
Here is one that was inspired by the same article (at least I think it's the same, it's certainly in Quilting Arts Magazine). I think that you can see I have a way to go with mine. Wish me luck!
Posted by Plum Cox at 19:02:00 No comments: