I've not been hiding, just having PC and internet problems..... pretty much sorted out now, though, so a belated HAPPY CHRISTMAS and a slightly early HAPPY NEW YEAR!

I thought that a quick round up of my pre-Christmas crafting might be in order, so here goes: 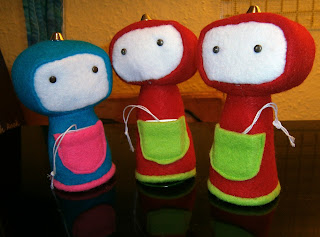 These 'message bots' were made for some crafting friends - I even managed to make two in 'Christmas colours' so that they have an excuse to pack them away until next year if they want to. 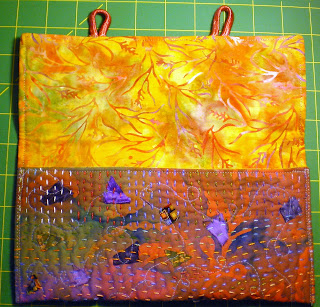 This pouch was made for another crafting friend from some batik that I'd stitched into last month.  I'm pretty certain that it didn't look nearly this garish in real life..... 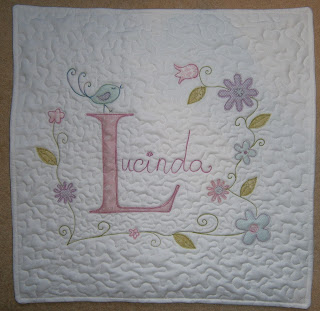 This is a cushion cover that I made as a 'commission' (my friend will make a charity donation in 'payment') for a very small girl - and I'm quite pleased with using the pastels again instead of the brights on white.  The details don't really show, but the overall meander quilting is in a very pale pink thread (Valdini, I think) that looks lovely on it. 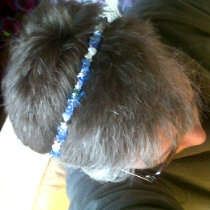 ﻿And finally, this was a bead encrusted tiara that I made for myself - although I have to say that I have no idea when I'd wear such an item, or why I'd want to wear something that really just high-lights how grey my hair is now!  I daresay that it will be claimed by one of my DD's in the near future whereupon I will be honour bound to make a second for the other DD!
So, not a crafty item shown that wasn't completed before Christmas, and the prospects of anything else appearing  in the very near future seem slight, as I've been too tired to pick up a needle except when helping small people with some of their crafting projects.  Perhaps my next 'show and tell' will be of their items, once they've been retrieved from around the house!
Happy Christmas crafting, Happy New Year crafting - I wish you health, happiness and sufficient prosperity and time to maximise your creative potential in 2012!
Posted by Plum Cox at 13:15:00 5 comments: 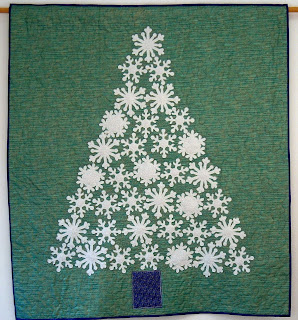 You might have expected a photo of our real tree too, but that might detract from the beautiful simplicity of this one!

The idea is based on a 'Don't Look Now' pattern called 'White Christmas' (if you live in West London you can buy it from Creative Quilting at Hampton Court).  Mine is much, much simpler - but knowing that I didn't want to cut out lots of snowflake shapes (scissors aren't always my friend and I didn't want a sore shoulder / arm as a result of the desire to make a tree like this) so I asked Ani Catt to cut some for me on her die cutter machine.  Then all I had to do was determine a suitable sized triangle, iron the snowflakes on, and quilt it.  Despite having an argument with the thread I was using for some of the time (once I'd changed thread I didn't have any more problems) it was really fast and fun to make up.  Perfect in our kitchen instead of the quilts usually displayed there.

That was the only sewing that I managed this week.  Apart from a few more origami wreaths (such fun to make and so fast!) my busy fingers have been busier writing Christmas cards than anything else.  Oh, and buying myself a new camera rather than leaving it to chance or Santa - a lovely red Olympus VG-130, which is even lighter than my old camera.....

I hope that you are finding plenty of time for crafting in the run up to Christmas.
Posted by Plum Cox at 11:48:00 8 comments: 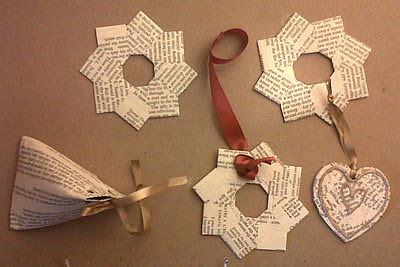 Once I'd got over the prospect of ripping pages out of a book (a 1950's cookery book that wasn't going to be sold or used anywhere, so far as I could see) my gal pals and I (me? sorry, grammar not my strong point and if I've just upset people who know about these things I can only apologise) put Constance Spry to use and made some lovely Christmas decorations.  it was either that or run out to buy a melon to try her melon salad recipe (make a melon basket.  Cut the melon flesh into 1" cubes and dress with french dressing mixed with curry powder and let down with a little cream.  Hmmm.  Perhaps tastes have changed in 60 years, or perhaps it never sounded that good.  Who can tell?) 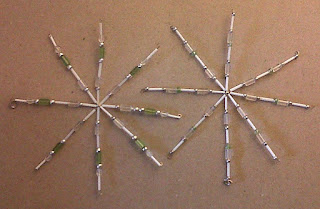 All easy projects (or easy once you've stolen the loo roll inners from the children who were saving them to make crackers.....) so we found time to make some beaded stars too.

My biggest problem with this post is that my camera appears to have been dropped once too often and can't focus properly, so these photos have all be taken on my phone.  I'm not sure that Santa reads my blog, though, so I might just have to treat myself to a new (and robust) camera.
In the meantime, anyone who would like to buy a Christmas tree this weekend and is in the Twickenham area should come down to St Marys CE School on Sunday morning where my DH is running the school Christmas Tree Sale.  My DD's will be there for some of it (sporting specially purchases 'Elf hats') and I'm planning to take a cash box and a chair and play cashier.  We all hope to see you there! 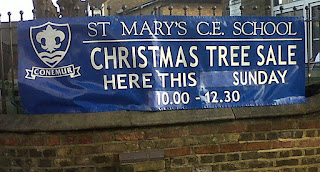