Meadowland Quilt for a Natural Field 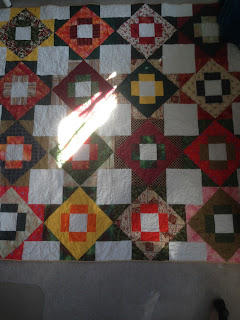 I can't believe that I missed the 'Mental Health Awareness Week' deadline so badly, but, late as I am, I'd like to show you this (now complete) quilt and tell you a little about the charity that I've made it for.

The quilt is made with the Meadowland pattern by Then Came June.

Lots of cutting and mixing of fabrics, followed by some sewing to make these large blocks, and the quilt top came together quickly.  Four blocks square gives a 64" square quilt. 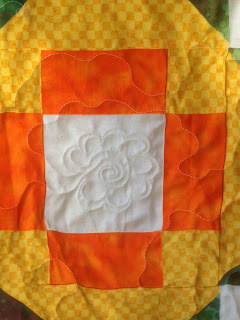 Then there was quite a long pause as I decided how to quilt this.

As I was making it specifically for Dose of Nature - a charity which promotes which promotes engaging with the natural world in order to promote good mental health - I wanted it to have some nature motifs on it. 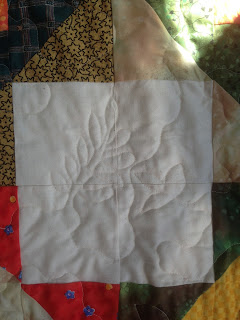 Then added more leaves and buds along the quilting meander. 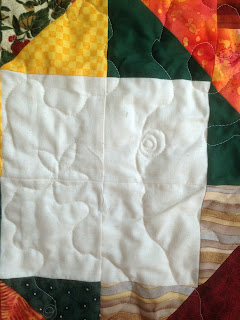 Random, just like nature.  I did wonder about trying to add some wild animals or bugs too, but decided that 1) it was beyond my skill set but 2) that didn't matter, as not everyone would like to snuggle with bugs or animals anyway! 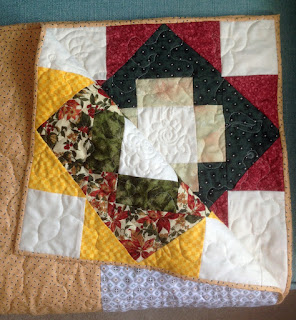 Cute prints on the pieced back, and the quilt is finished!

So, please go along and read about Dose of Nature - the work that they do and the evidence that they have for proposing that we all try and spend more time with the natural world.  They have just moved to a base at Pensfold Field in Kew, which is a wonderful location.

I have to declare an interest, as one of the founding trustees is my wonderful SiL.  I have her to thank for introducing me to Pensford Field, as I previously had no idea that it existed!

I wish everyone who is part of the charity all the best in their work. 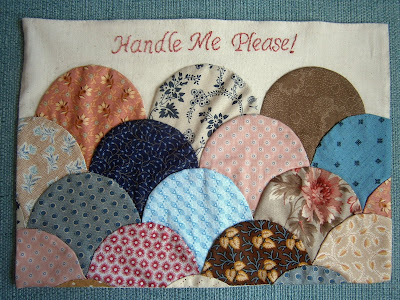 Another slow sewing week, with hand work as a companion to a cold!

This is my second sample for Gunnersbury Park Museum.  I'm not sure what has made the difference, but my clam shells aren't the same as those on the Acton Top - mine seem to be a deeper shape. I was happy to complete this - you can see at the bottom hem how my work was starting to slope - more rows would have meant even more slope, I think!  No way could I accurately make the number that are in the top itself - although they are long borders and probably no deeper than this sample, now that I think about it.

It may have issues as a recreation / modern make, but at least the technique is the same! 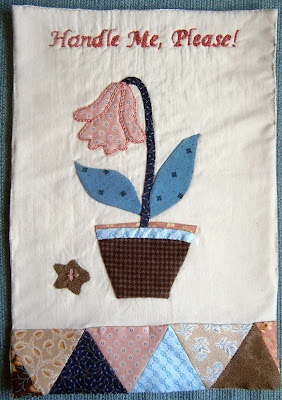 I enjoyed a fascinating morning at Gunnersbury Park Museum this weekend. I was there with a group of like-minded textile bods who are interested in making handling samples to go alongside a display of some of the museum's textiles, including the Acton Top, this autumn.

We were allowed to get very close to the top and really examine the fabric and the stitching closely.  Fascinating stuff!  The top is approximately 200 years old, with some of the fabrics being even older.

This is my interpretation of one of the applique elements - with a little paper piecing at the bottom to ground it.  You'll have to go to the museum in the autumn to see if you can spot what it is based on!

I like to think that it's authentically wonky around the edges.....

Fun to make!  My next hand sewing will be to try my hand at clamshells (something I've only ever tried once before) for another handling piece. 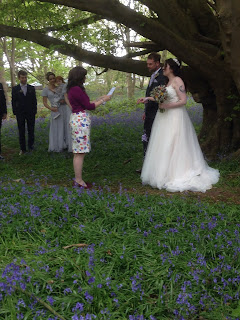 Most of my weekend was taken up with enjoying a wonderful family event.

We dodged the hail and rain storms to enjoy Norfolk's finest bluebells.... 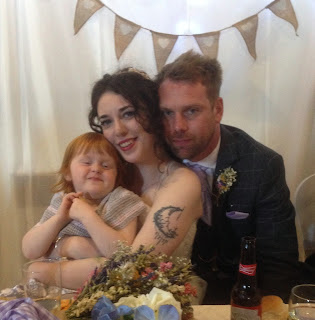 ....and wish the participants many joyous years of happiness to come!

It was such a lovely event, full of joy, the sort of uplift that everyone needs once in a while. 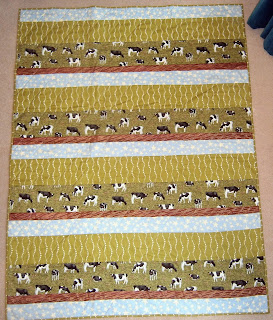 Before we went off for the weekend I finished this strippy.

Mary's original pattern is here.  I didn't really follow it precisely this time, as I was using up the cow print and some other prints that more or less went with it. 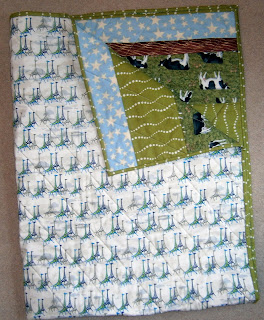 I used the giraffe fabric for backing again. 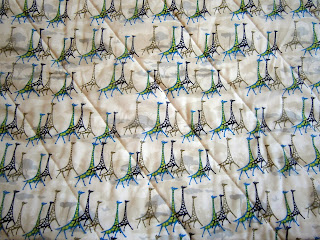 And a simple diagonal quilting.  I quite like the look of this, but I do find it a little dull to do!  Perhaps I just need to turn the radio up a bit louder so that I can hear it over the noise of the sewing machine!
Posted by Plum Cox at 10:44:00 2 comments: