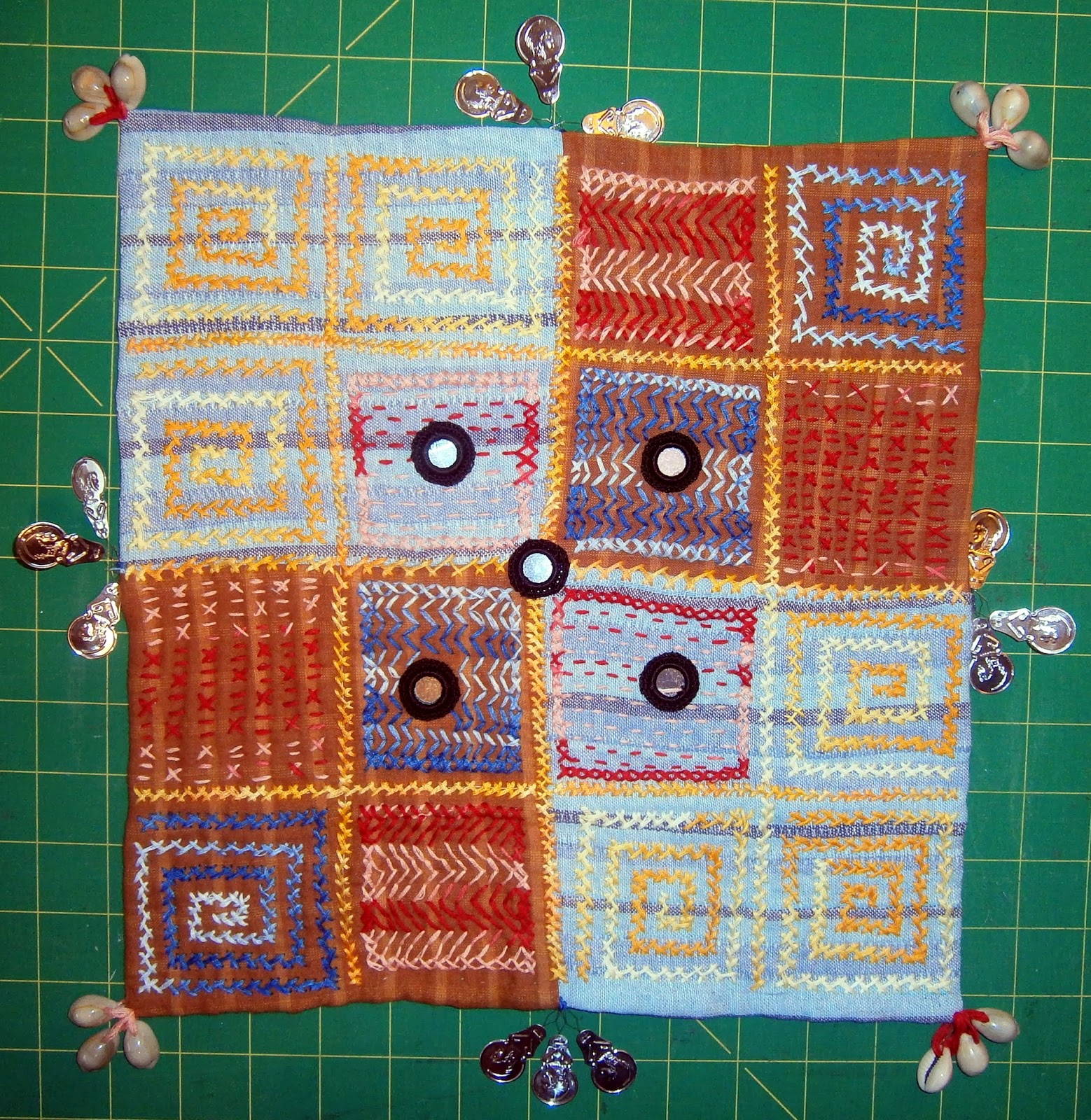 At last!  The Banjara is finished - I think that it took me about 20 hours of stitching in total.  I added traditional details (cowrie shells - cheaper to buy a bracelet and snip it than to buy loose drilled shells for the number that I wanted), mirrors and plenty of herringbone stitch.  The needle threaders added around the edge were instead of coins.  Increasingly valuable to me, though, as my eyes get older!

Once it was finished it was time to start on my Kantha sample.  Pictures of that next week, perhaps, once its a bit more worked on. 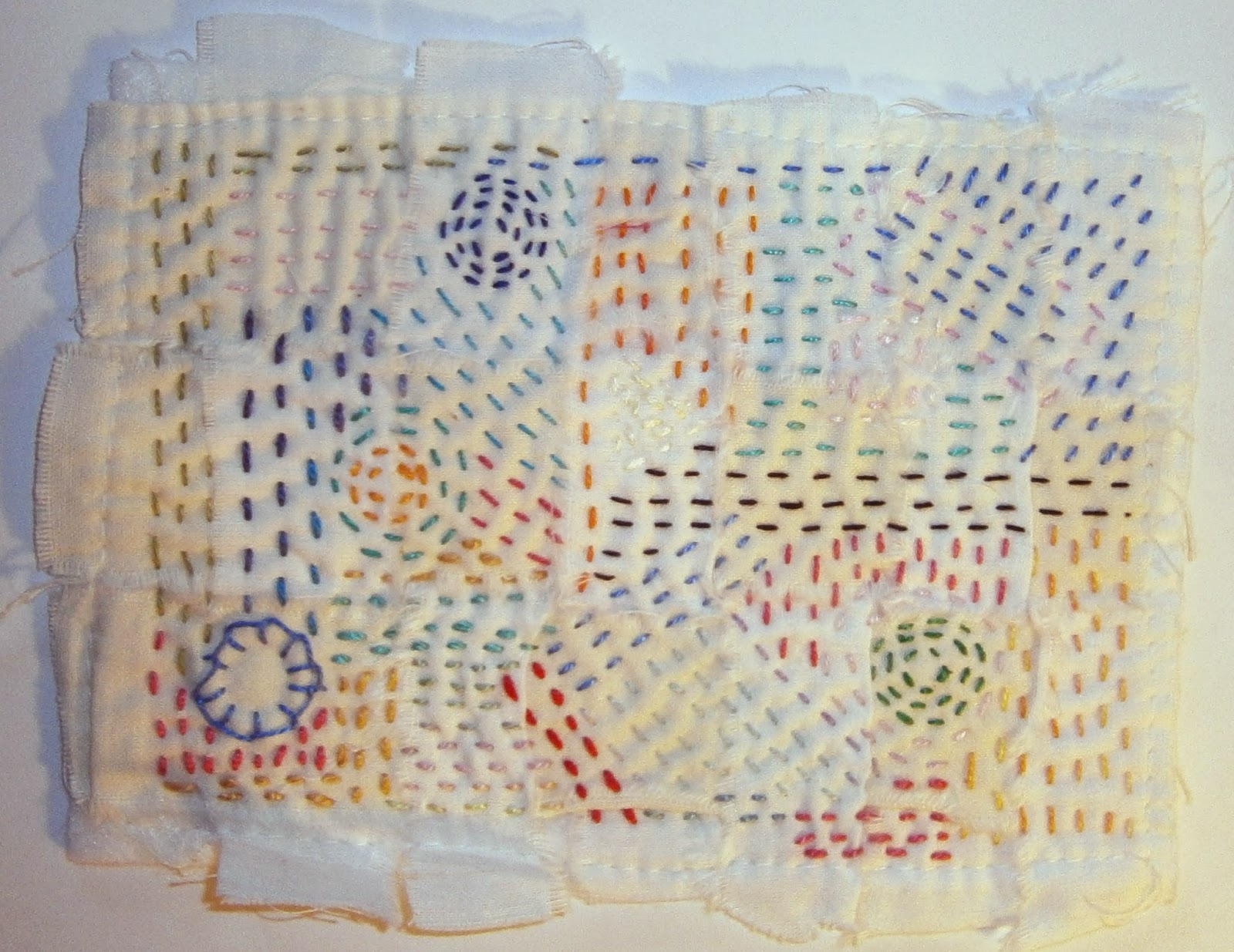 Whilst researching these 'geographical quilting' genres, I came across the phrase 'slow cloth'.  I guess that there are lots of ways of making these cloths, usually re-purposing old cloth into new items by layering them and reinforcing them with running stitch.

It made me go back to a couple of  mindless stitching items that were incomplete in my 'pick up and go' stitching pack.

Just like the sashiko, banjara and kantha stitching, layers of cloth with running stitch. 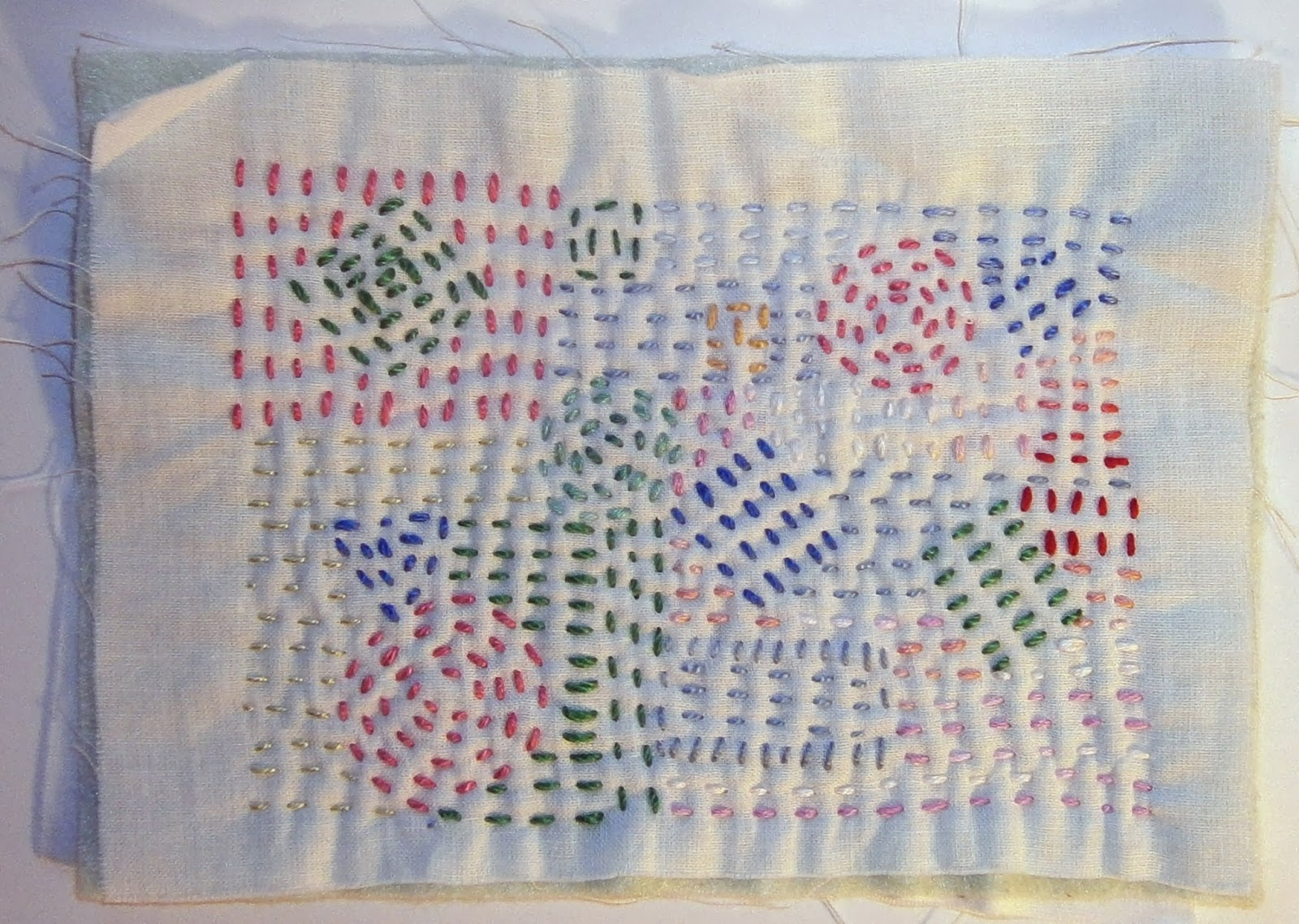 Unlike the other forms of stitching, much less precise, just playing with the form of the running stitch to make little patches of colour.

The stitches are all formed from ends of threads from other projects.  Some of the fabric left over from other projects too.  Real 'economy' but without having a utility at the end of the process - these pieces are only about 6" x 4". 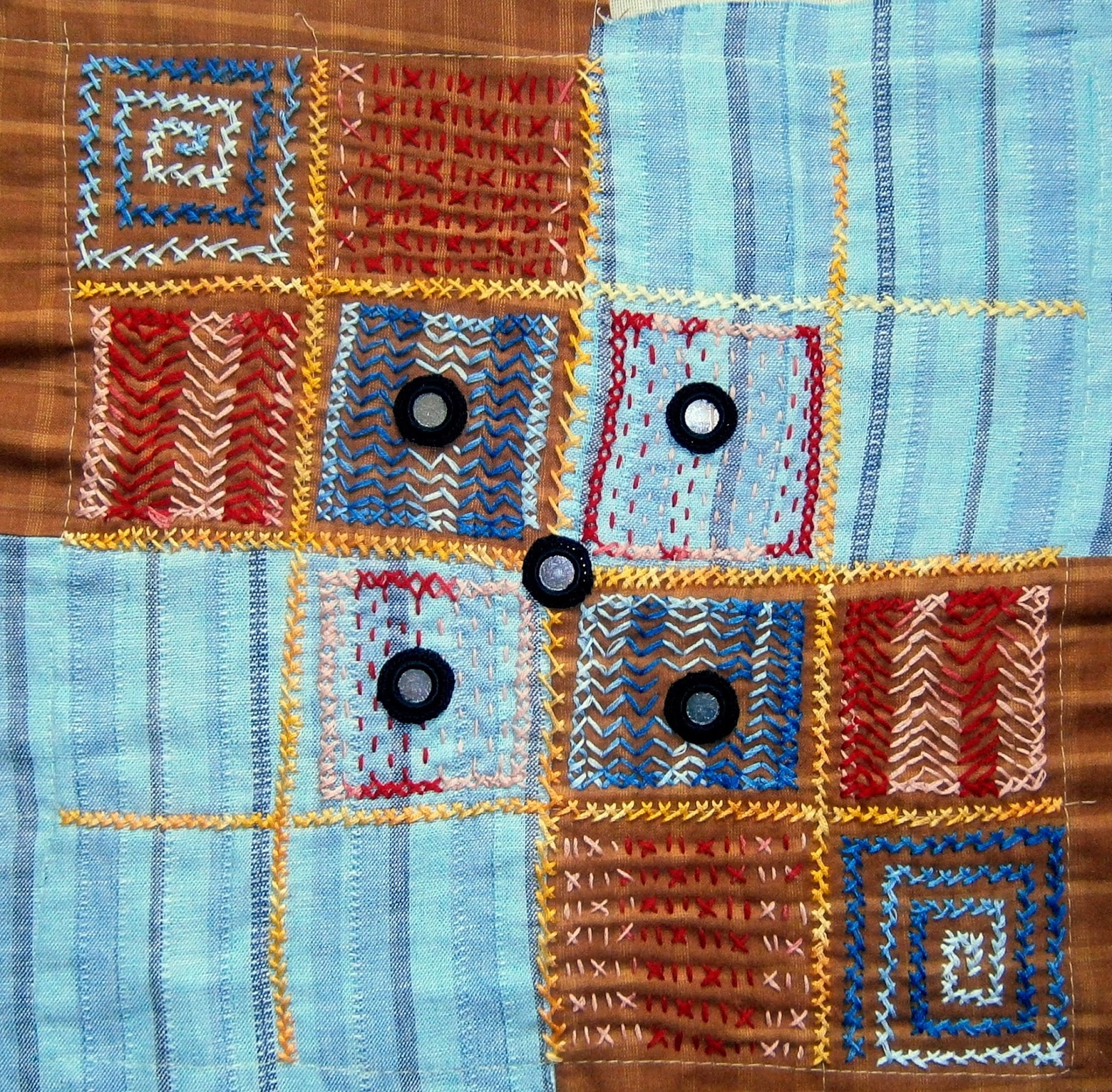 This is my start (well, more like half way through) at my sample for Banjara quilting.
Lots of herringbone, cross and running stitches.

Still six more squares to go, then an edging that includes cowrie shells...... so plenty more hand stitching to go! 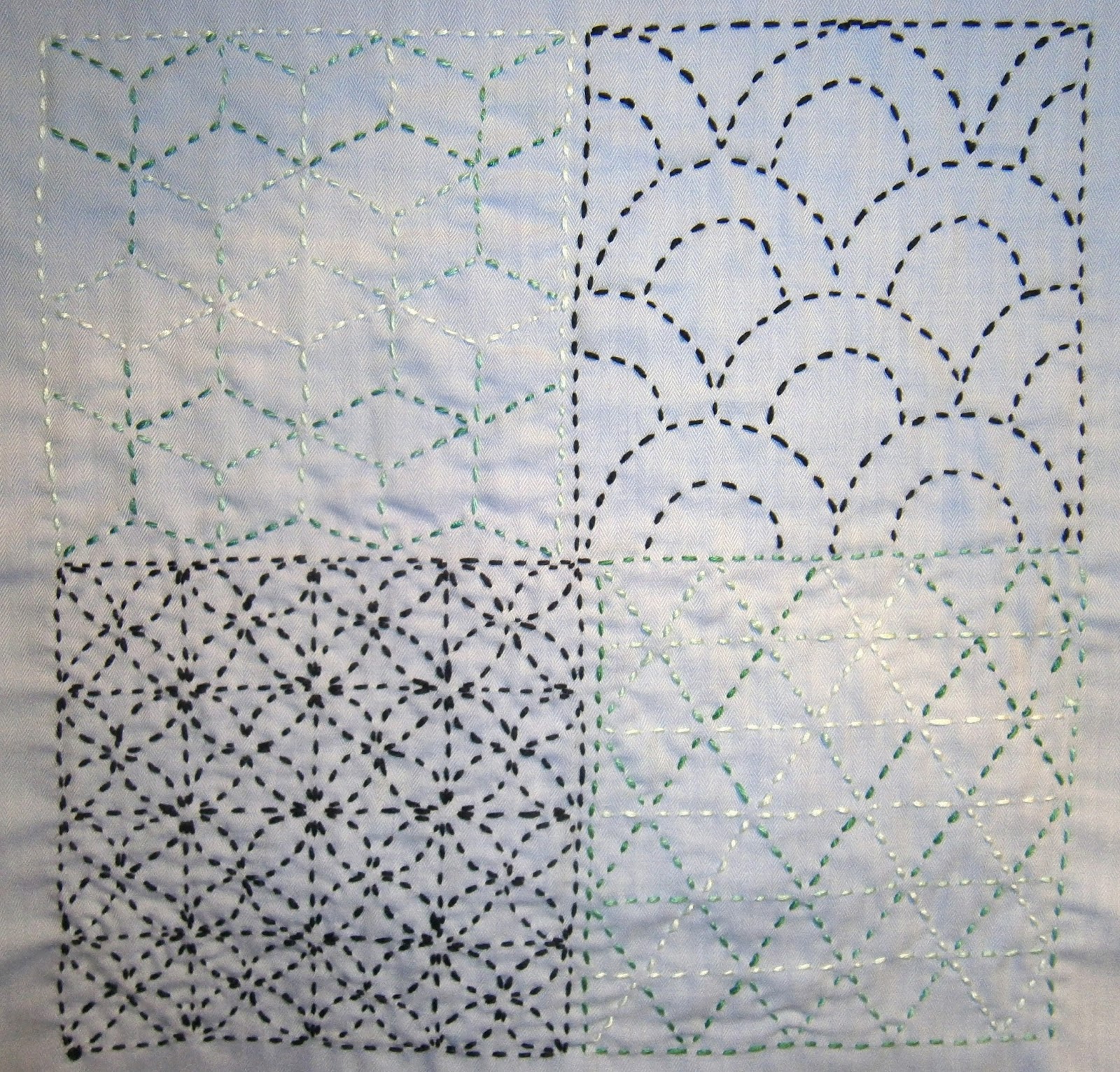 This is my Sashiko sampler - using different patterns, two sections with variegated thread (which doesn't show up quite so well!) and two sections in black.

I found it quite hard to get the junctions  right where the lines of stitching met.  Fun to try! 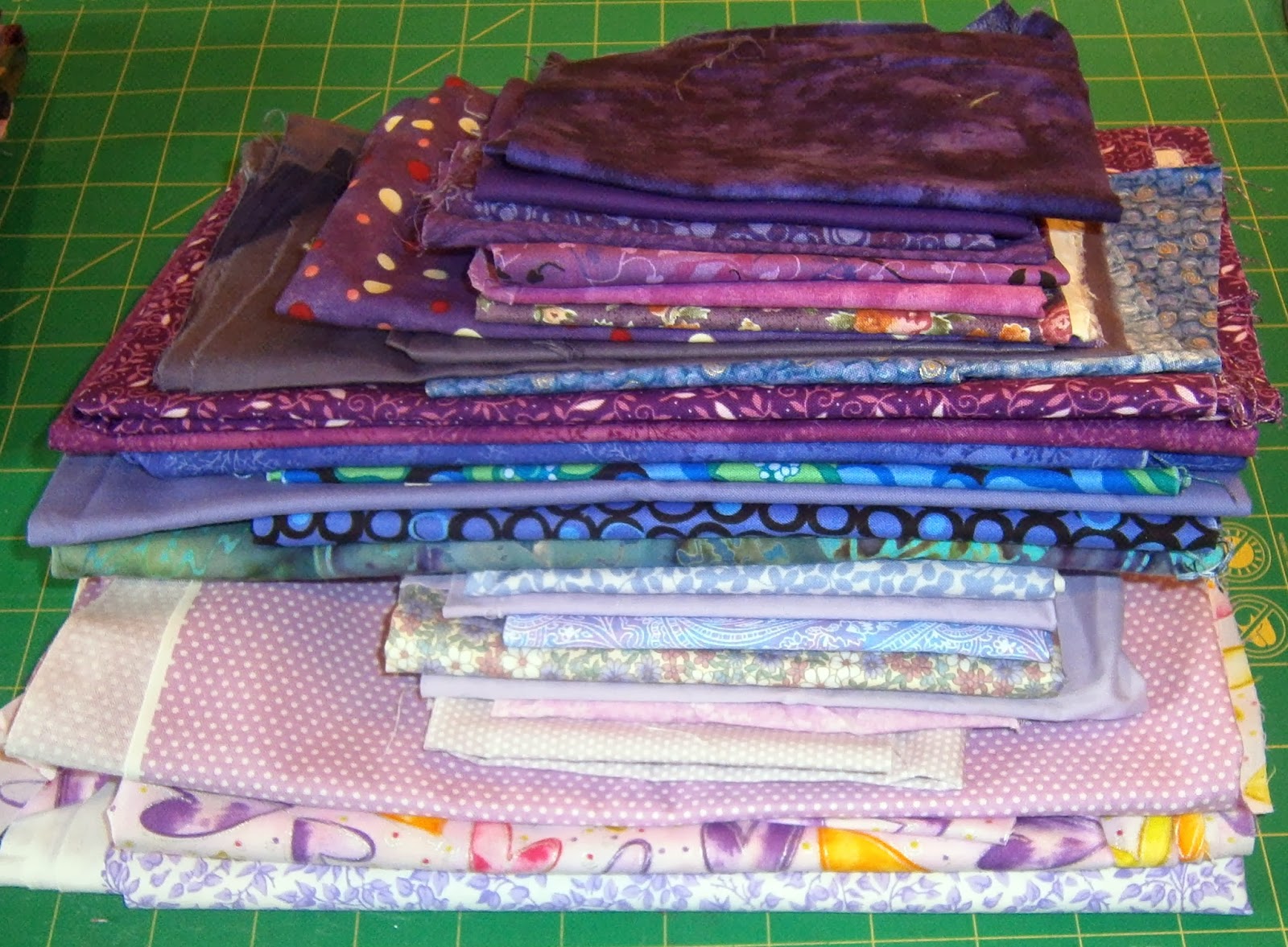 This is going to be my machine sewing project, though.  I'm pleased to say that I've finished Module 10 on my C&G course, and now I need to make the quilt that I designed.

Fifty blocks, all using lovely purple fabrics in various tones.  I managed to pull a total of 49 different fabrics from my stash (actually, I'm slightly economical with the truth there, I bought four of them last week hoping to include them).  Of those, these 27 fabrics have made it through to the final audition.  A couple are still 'on probation'.  I can't decide whether or not I want flashes of green to appear in my 'darks' or not.  I may have to make a few blocks up and see how they all play together!

The only machine sewing I managed this week was making a couple of bags using Benta's fab tutorial.  Very quick, very cute, and ideal for a birthday present for a friend.

First finish for the Year! 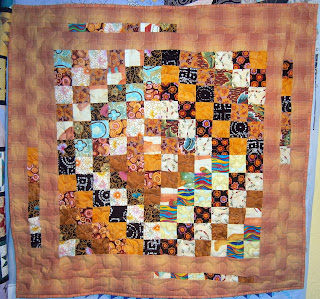 Hurrah!  I DID finish this little quilt (34" square) last week!  Border 'flashes' from the left over bits of the 'trip' part of the quilt, simple quilting and a straightforward binding. 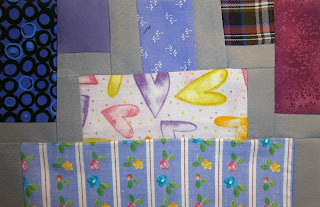 I also managed to finish and submit my C&G Module 10.  This is a sample block (needs to be better finished in the real thing, if I get the go ahead.  It's based on a shape that seems to reoccur numerous times in the garnet work that I saw in the Staffordshire Hoard.

Now the anxious wait to see if I've passed this module and whether the quilt design will pass muster. 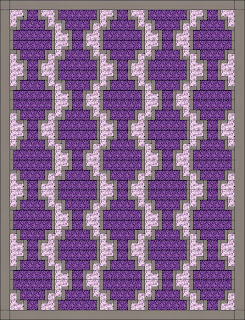 This is the final quilt design, although I've decided to reverse the light / dark purples (as shown in the sample block above) and plan to make it scrappier than I've shown it.

In the meantime I've got some handwork samples to complete, which means that my Love Entwined is on hold for the moment. 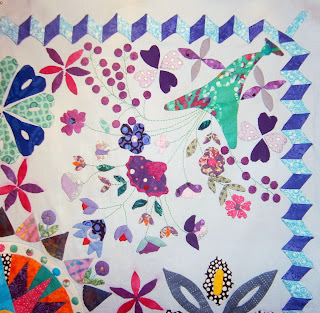 I managed to finish the last flower on my Love Entwined Part 6 last week, but failed to make the eight tiny circles that it needed to complete it  I may leave them and add tiny sequins or buttons when I'm finishing the panel. 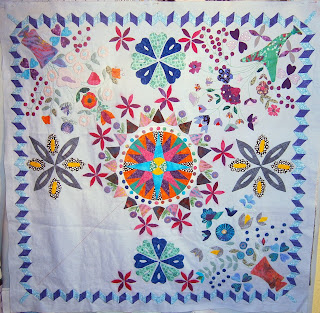 Just one more corner to make and then I'm going to think about a narrow border and binding, and how to / whether to quilt the panel.  I'm planning for it to be a wall hanging (which is why I'm stopping here, not continuing for the rest of the BOM - my remaining wall space isn't huge) and I think that quilting will help it stay stable, not saggy, but it's hard to know how best to do this.

I'm hoping to carry on the good progress with my sewing - although at some point real life and other 'stuff' will have to creep back in!
Posted by Plum Cox at 10:05:00 6 comments: 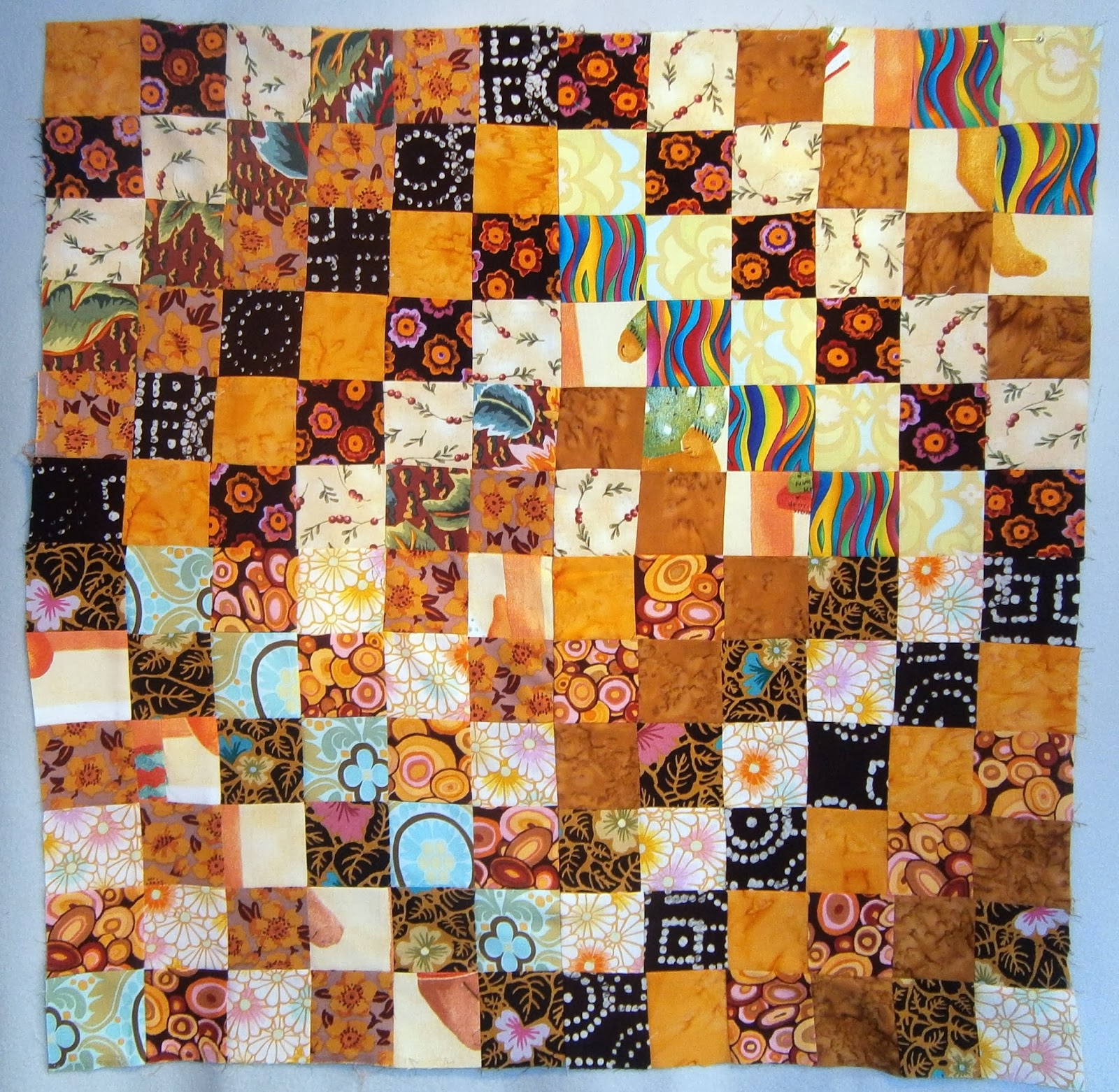 Januaries challenge was to create some scrappy 'trip around the world blocks' based on the Bonnie Hunter method.  I only made four blocks, which has given me this centre of 24" square.

In fact, just this afternoon I added borders to it and brought it up to 34" square - just the right size for a piece of fabric with teddy bears on that I have from my late MiL's stash.  It's basted and waiting to be quilted.  It will be my first finish for 2014 and I hope the first of a set of 12 charity quilts.  Having rather let my charity quilting fall by the wayside last year I'm hoping to make one each month this year - although they may be loaded towards the back of the year, as I'm hoping to get my C&G to the moderators in May, and I've still got three modules to complete! 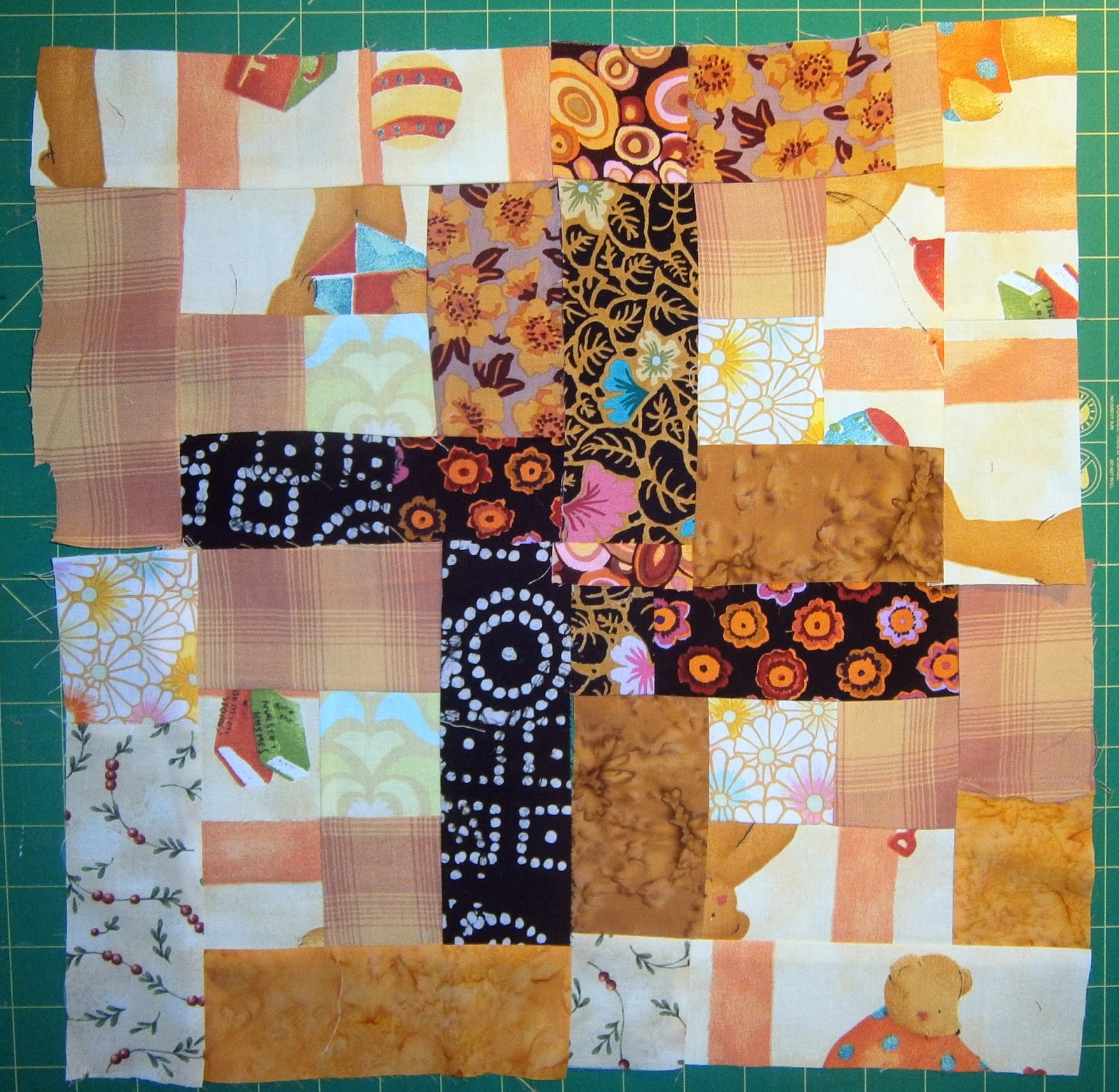 With the remaining bits and bobs of fabric and jelly roll strips I made up four 8 1/2" square blocks - they will get used in something later in the year, I'm sure, and will be more fun to add in as blocks (they aren't sewn together in this pic, just giving an idea for a layout if I want a medallion - but they might be used separately.

Of course, it was only when I was photographing these blocks that I realised that I hadn't left myself anything to make a binding for the 'trip around the world' quilt - doh!  I shall raid my stash for a bit more of something brown.

All the bits that were left from these (not very much!) were cut into 1 1/2" squares ready for this next little project. 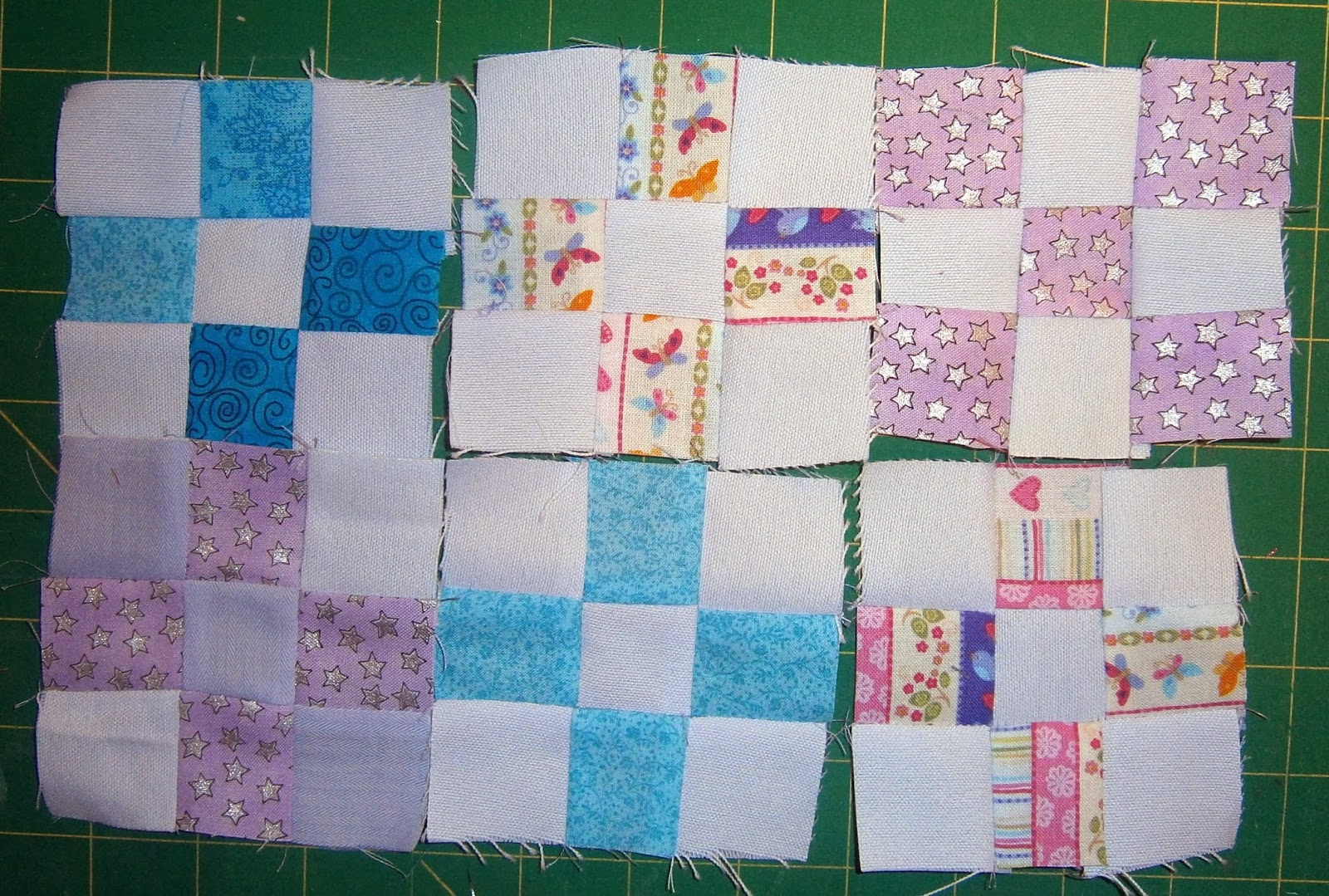 I'm making these little (3" square finished) 9-patch blocks as leader and ender blocks.  I plan to sash these and make something fun later in the year.  I've been cutting 1 1/2" squares for ages now but I've finally got some of them into sets (aren't binder clips great?) and in a small tin by the front of my sewing machine.

The pale fabrics are all scraps of my husbands work shirts.  He almost always chooses pale blue which is fine by me!

Finally, I've made some cards.  I've used up a bit of sweet paper quilting and some amazing hand printed paper from Avril to make some fab cards.  Always good to have something on hand.  The space at the bottom of each card can house an appropriate sentiment.

This all sounds sane enough, doesn't it?  It's only when I have to admit that I actually had to piece a 1 1/2" square in order to have four of them so that I could get a matched 9 patch kit out of one particular scrap it that things start to sound just a little obsessional!

I'm off to work on my Love Entwined top now.  I've almost finished the third corner - one flower and 8 tiny circles to go!