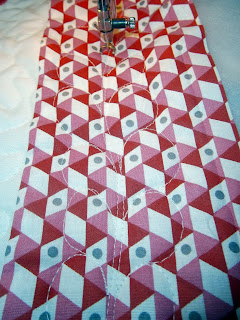 It appears that it's a while since I last did much in the way of FMQ - and in particular feathers.

I decided to add a gently meandering feather wreath - but it took me most of the two laps required (one lap for each side of the spine) to feel that I'd got my rhythm back!  Still, better to have improved with that, rather than not to have given it a go at all! 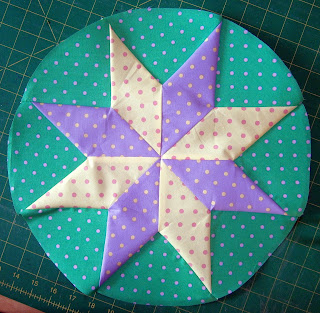 I also went ahead and added the circle to my Little Hazel.  I think that this might need a re-visit too, as one or two of the green segments are just slightly 'off'.  I'm sure that it would be better to greet the next stage with an actual circle! 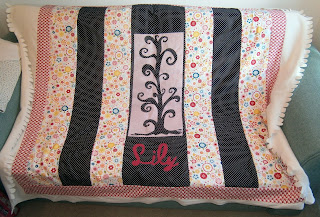 Two WIPS above, but this is a chance to show off my finish.  Not truly a quilt (fabric applied to a fleece, so only two layers, not three) I've made this as a camp blanket for one of my DD2's friends. 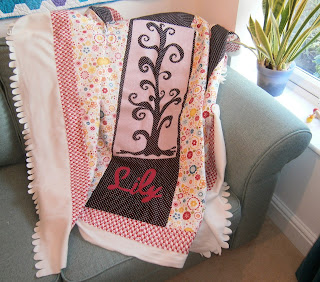 It started from the 'cut out' that was left after I made my curly tree for the mini tumblers quilt that I'm making.

I applied that (fused then machine sewed) to a contrast fabric then added further WOF strips in a quilt-as-you-go fashion until I'd covered the bulk of the fleece.

Then I added a 3" border to cover all the raw edges and frame the design.

Finally I added a fused name to personalise the blanket.  All made in plenty of time for a birthday next week!  I hope that she will like it.

Hope that you are enjoying some hobby time too!
Posted by Plum Cox at 10:21:00 4 comments: 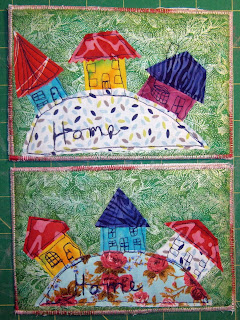 This week has been a good week for small finishes - well, tiny finishes, really!
I've made cards for a couple of swaps and for a friend.
These homes on the fill are all made without fusible - just hope holding the bits of fabric into place until I stitched them down. 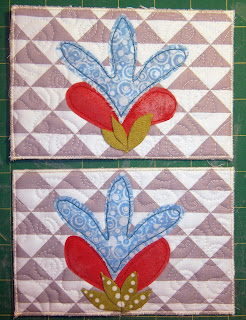 These ones were made differently. Fused fabrics for the red and blue, then freezer paper leaves added on top to give a bit of depth.  Then the background was machine quilted. 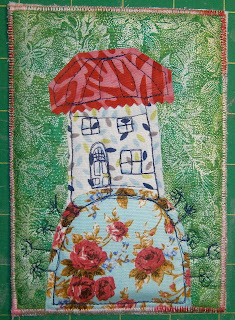 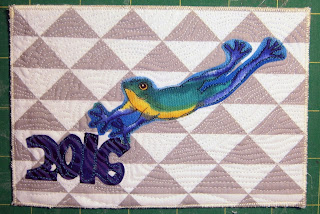 Lots of satisfaction from these makes! 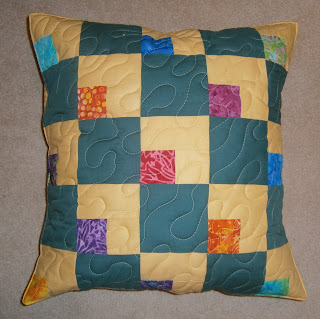 I also made a cushion (and, indeed, the cushion pad - the silver lining from finding the large bag of stuffing last week!). for my BiL.   I wanted to include green and gold with a bit of brighter stuff, so came up with this simple pattern which I then quilting in way that was trying to bring out the diagonal pattern.

Naturally, I couldn't have a week with finishes and no starts, and as the first part of Little Hazel was released by Esther Aliu I decided to start that using some spotty fabric.

Of course, what you shouldn't do is decide that you will invest a very few minutes in starting it, when you are on a deadline to go out to the theatre. 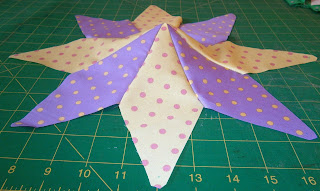 You may find, ahem, that you leave off a crucial marking (in my case, which end of the template was the centre) and end up with more of a flower pixie hat than a flat quilt centre! 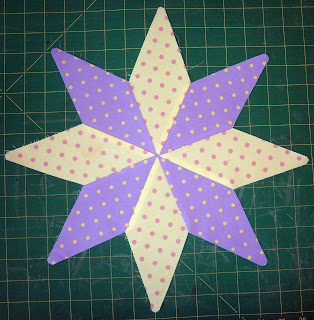 Of course, I then had to reinvest extra time to unpick those little seams and to make a properly flat version of it.  This looks much better!

Later today I'll add in the rest of the circle to complete the first step. 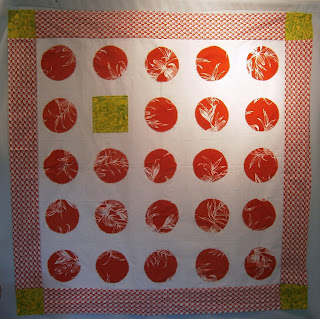 I've made progress on my 'stand out from the crowd' quilt top.

I had hoped to be quilting it today, but when I went to the place where I *knew* I had a piece of wadding large enough (the quilt top is about 44" square, now that I've put the borders on) I discovered instead a bag of soft toy stuffing!  Doh!

Wadding on order...... but I've started some hand sewing on my applique tree mini quilt instead. 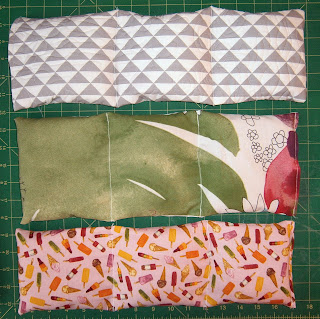 I did go ahead and make the warmers that I planned last week, though.  The rice was the right amount for three warmers with a handful of rice left over for the hens to eat!

I've been working on some fabric postcards too - I hope to finish and photograph them for next week!
Posted by Plum Cox at 11:53:00 3 comments: 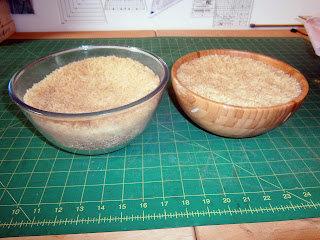 Anyone else got bowls of raw rice now that the decorations are down?  I'm thinking that anyone who made sock snowmen but wants to store them without attracting mice will be in the same boat as me - with lots of rice on hand!
I think that I'll recycle mine into microwave heat bags.  I don't know if you have a favourite size / weight, but I do!  I make mine with 750g of dry rice, split into three equal 'bays'.  My starting size of fabric is 17" x 11", which I fold in half lengthways and stitch around two sides, before filling in thirds, sewing the top of each 'bay' as I go. 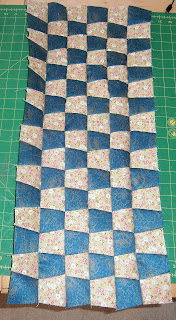 That will keep me out of mischief for a little while - longer if I add a proper covers for them too.  I heat mine for 2 mins 20 seconds in an 800w microwave.  Great for soothing sore joints or warming chilly feet!
My other mini project is a tumblers mini quilt, inspired by my new book and using some of my Christmas present fabric.
I made  this background - tumblers are 2" tall - and eventually ironed it.

Next I sketched a curly tree onto some heat 'n' bond, and ironed it to some pale pink fabric.
Then I had to cut it out.  Time consuming, as I had to do it over a couple of days.
Now it's ironed onto the background ready to sew.  Hand or machine?  I'm not sure yet!
Hope that you have fun projects to start your new year with! 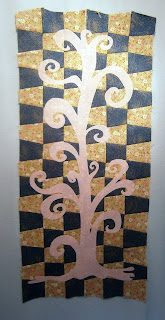