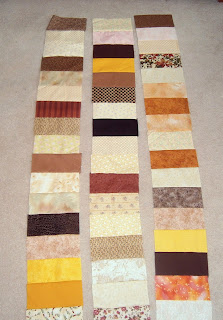 Then I decided not to!

I decided that I'd make something a bit more like a stacked coins quilt.  Now that I have these three strips made I need to shop my stash to find something that will make the alternate stripes to complete the top.

I'm already wondering whether I'll make some 'statement quilting' like feathers or a leaf and vine design down the joining stripes, or whether I'll just go for an all over pattern.

Surely I'm not the only person who enjoys this sort of contemplation, even before I have the fabric joined into a quilt top?!?
Posted by Plum Cox at 08:00:00 3 comments: 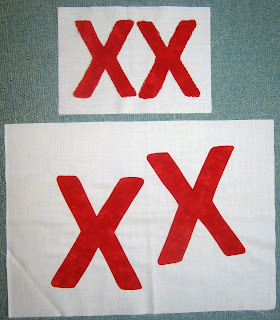 My DD's school has embraced it and is encouraging the girls and their parents to take part in producing blocks for it - they are hoping to make at least 1000 to contribute to the project.

In short, there was a little acknowledged atrocity committed during WWII.  Between January 1940 and August 1941 70,273 people with physical or mental disabilities were killed by the Nazis.

A report on the person was compiled and it was read by three doctors.  If at least two doctors decided that the person was 'unfit' by marking the page with a red X then that person would be killed, usually with hours. 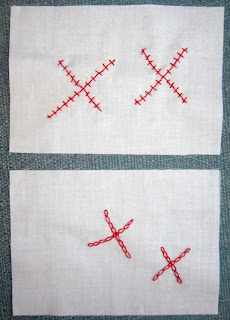 Jeanne Hewell-Chambers is organising a project to make 70,273 white blocks with a red double X on them, representing the people who lost their lives in this terrible action.

I love the idea that these people will be acknowledged and this atrocity brought to the attention of more people.  I know that I hadn't heard of it before now.  I think it is wonderful that we can, all these years later, subvert the X and turn it from a dismissal into a symbol of love.

These blocks will be joined to become wall hangings and quilts and the plan is to display them in several cathedrals, I think by Holocaust Memorial Day.

I'm showing you my first four blocks.  I'm expecting to make more.  Perhaps you'd like to join in too?

Thank goodness that the people that I know and love who have challenges, whether physical or mental, could not be put into such a program.  The times we live in are far from perfect, but at some points we do have to stand and contemplate that there have been improvements in attitude and expectation, even if there is still more change to push towards. 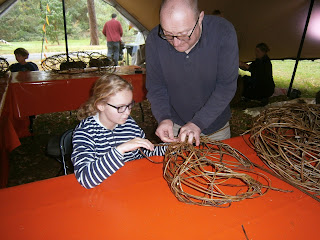 Kew Gardens is running an interesting project at the moment called 'Artful Autumn'.  They are giving garden visitors the chance to try several different 20 minute workshops.  We enjoyed the willow weaving one - finding out how relaxing it was to help fill in these forms created by Julia Clarke (who also has several large willow sculptures on display down the Cedar Vista) - as well as how strong your hands and fingers needed to be. 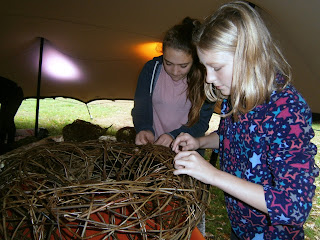 We could also have tried creative writing or yoga.  A lovely tented area in a woodland setting.  It was a great addition to our visit - and is on for another two weekends at least.

It was a very peaceful atmosphere in the tent.  People were enjoying the creative challenge and quietly getting on with the task whilst chatting to others.

I'm still a very strong advocate of crafting for wellbeing, in all sorts of ways! 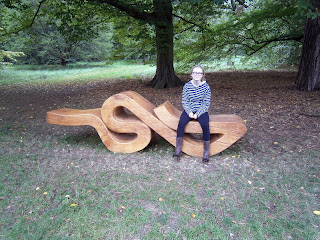 We also loved the benches created by Nigel Ross and also displayed along the Cedar Vista.

Beautiful forms and beautifully finished, I'd love to own one of these!  Lots of family debate about our favourite ones!

Whatever form your creativity takes I hope that you are finding time to make and contemplate this week.
Posted by Plum Cox at 10:41:00 1 comment: 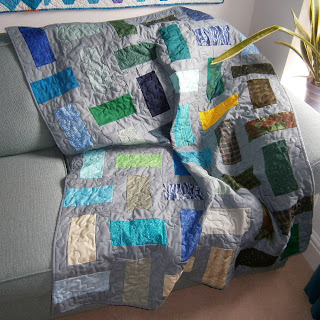 I finished it!  At 45" x 60" it's my favourite size to make and quilt, I think.  Big enough that it can be well used, small enough to handle easily through the sewing machine when I'm quilting it!

This is another one destined for Project Linus - and the latest in my 'scrap busting' series!

The 8" x 4" coloured strips were cut many years ago when I wanted to make a scrappy looking quilt for a good friend who was getting married, and which were added to a little over the years. 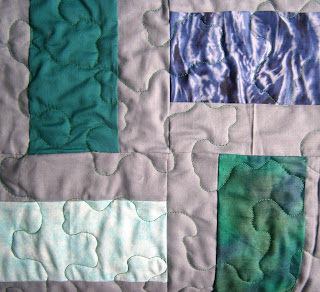 I was aiming for 'boy' colours, so no pink or purple or flowers in this one.  The next one to made to this pattern will contain any of those in my scrap pack!

A meander quilting pattern - restful for me to quilt.

More lovely birthday presents to share - thank you to the lovely Avril!

The picture on the notebook is made of pressed flowers and foliage by Helen Ahpornsiri.  Incredibly detailed!

Aren't the buttons fun too?  I now feel that I would like to make special projects to use both the ceramic bluebirds and the wooden Australian ones!
Posted by Plum Cox at 14:27:00 2 comments: 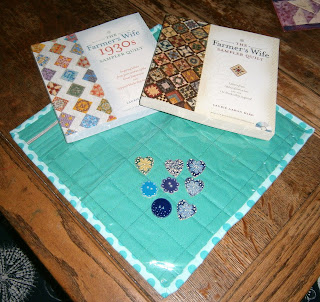 I enjoyed my birthday last week and received these lovely sewing related goodies:  quilting books(from my lovely sister), a block keeper (from the lovely Benta) and some beautiful ceramic buttons (from my lovely DD1). 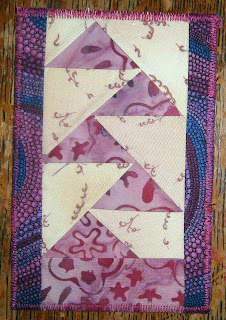 I also received a couple of fabric postcards. 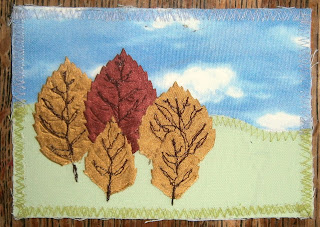 ....and this one from Rosemary. 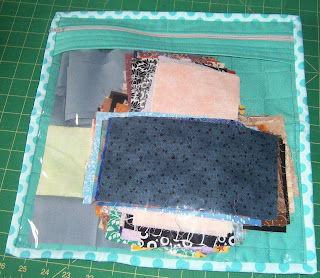 Here is the block keeper in use already - although not for completed blocks, this time around, but for the cut up components to make enough blocks to make a small quilt. 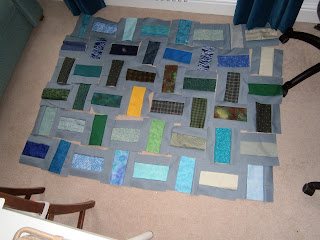 The same sort of pattern as this one - seen here with a trial layout which I tweaked a bit before sewing the blocks together.

I adapted the pattern from the Project Linus free pattern called 2-4-7.  I had some scrap fabrics cut to 4" x 8", so I added 2 1/2" strips to either side and made 8" square blocks with them.  I made this one in 'boy' colours as I know that Project Linus have said that they get more in 'girl' colours. 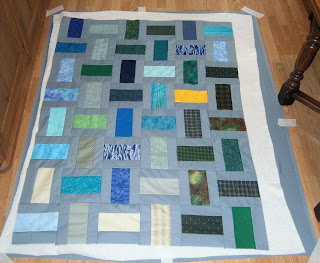 I got as far as basting it - now I need to get quilting it!