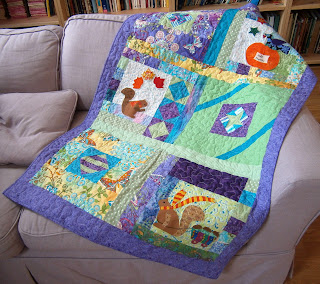 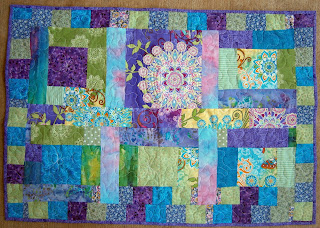 Clearly there is something else going on here.  How can I be this productive?  Two more finishes in a week!  Perhaps it's all displacement activity, as I had hoped to perhaps finish my current C&G module before school broke up for half-term on Friday - and now that I've looked again at what I still need to do, I can't see how that will happen, or, indeed, why I ever thought it might be possible!
So, the three fusible blocks from Bunny Hill's block of the month (2011), plus three tiny blocks rejected from another 2011 project which I 'upsized' by adding deep borders, put together with some scrappy sashing, and another Project Linus quilt is created.

And I decided to 'Angelika' (can I turn this into a new verb?) the remaining bits and bobs that were mostly pre-cut (from when I thought that I was going to make more progress on the BOM than I actually did) to produce this little scrap quilt (approx 24" x 36").  I decided just to whizz it up, paying no heed to the fact that the large printed block wasn't quite as large and the other five pieced blocks, and without worrying about where cuts came in the random-ish square that were sewn into strips for the border and some of the blocks.  It was fun, it was fast, and it got another set of small pieces made into a quilt - what a result!  The batting was also pieced from many smaller offcuts, a very scrappy quilt!

In addition to this I had fun playing with making fun foam stamps for backgrounds for ATCs with some of my gal pals.  I'll try and remember a photo or two of them next post, as there were some great ideas - and great execution too, making mine look quite mundane!

Onwards and upwards!  Back to paper collaging and a little hand sewing again for the moment.
Happy crafting everyone!
Posted by Plum Cox at 13:53:00 4 comments: 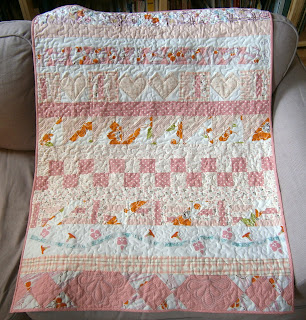 This is called 'My Girl'.

This has been made over some months as a quilt group challenge - two strips made in different styles each month, then put together (in my case with some of the left-over jelly roll strips that I'd mostly made the rest of the strips from) to make a small quilt.  Only something like 32" x 42", but I hope it will be enough to make someone smile.

I have to be honest, I wasn't pleased with the way that the creamier backgrounds didn't really work the brighter white backgrounds.  One of those quilts that in some ways it's better just to finish and move on from, and not to worry about it all overmuch! 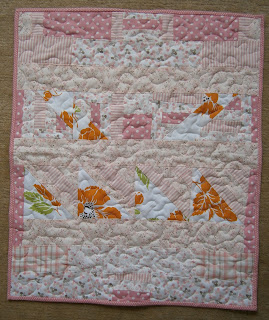 This tiny quilt (18" x 22") is less 'lasagne quilt' and more like 'round the pantry hash'!  It has used all the odd blocks and the last couple of jelly roll bits that I had left, and took a little juggling to get it large enough.  Very satisfying to use the scraps from one quilt to make another.   I think that the technique of doing so should be called 'doing an Angelika' as she is the one (on my on-line quilting group, BQL) who I most associate with this idea.  Thank you, Angelika!

Both quilts will stay with me until our group quilt show (you want details?  OK, it's the 5th - 7th October from 10am to 5pm at the Landmark Arts Centre, Teddington.  TW11 9NN - don't worry, I'll mention it again nearer the time, but feel free to put it in your diary now!) and then they will be passed on to Project Linus.

I've also decided that some of the other unfinished projects I've got should be given enough time to get them to the finish line too.  Lovely DH has promised to take the DDs away for a couple of nights at half-term, so I have big plans for my twisted log cabin then, and hope to work on one or two of the other projects (mostly using random blocks left over from other projects or made as trials) which will probably also end up as Project Linus quilts.

I hope that your crafting is going well.  I'm off to do half an hour on my C&G (texture this module, which is fun, although I'm missing colour as it has to be completed in mono-chrome).

Some real quilting going on! 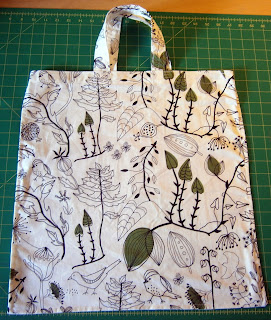 .....but as I haven't started sewing the binding down, I'm showing you this bag instead!

If you want to make a simple shopping bag I can heartily recommend the Morsbag pattern (and the whole project - if you do make a bag for yourself, why not make another couple to give away? You don't have to accost total strangers {unless you'd like to, of course, I'm not telling you how to live your life!} but can just give them to friends, colleagues or acquaintances!).

I made this bag for a friend, and despite not having made one for a while, it only took just over 30 minutes from taking the fabric out and the rotary cutter from the cupboard.  Not bad!


My other sewing - yes, REAL quilting, as in making a (small) quilt - was clearly in response to being given the block markers by Benta.  Clearly just what I needed to prompt me to gather the pieced strips that I've made over the last few months for my quilting group's 'sew a row' challenge and choose an order for them that wouldn't get lost between laying them out on the bed and sewing them into a quilt top.  So, quilt top completed, it was time to get it basted and quilted - which I managed today (in part as I haven't had my 'little angels' at home - they both had a play date after school, which has given me oodles more time!).

Off to start the binding whilst I wait for them to come home.