Another Scrap Stash Quilt - and cake! 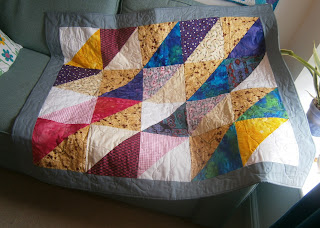 Another little quilt finished!  50" x 42".
Sprawled over a sofa it is inviting a snuggle now that the weather is a little cooler again! 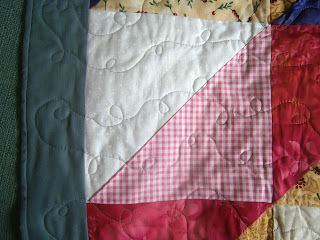 I used the same 'loop the loop' quilting pattern as on the last little quilt. 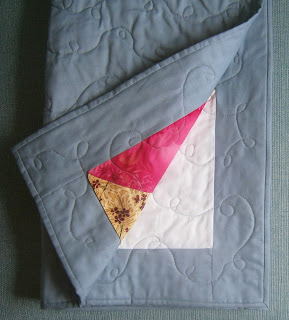 I do love this IKEA fabric that I've used for the border, backing and binding. 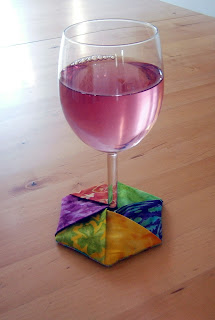 I also made a couple of these clever little coasters that you can slip over the base of a wine glass, using the tutorial from 'Busy as Can Be'.  Just 7 charm squares and a few minutes.  Perfect for posting overseas to friends. 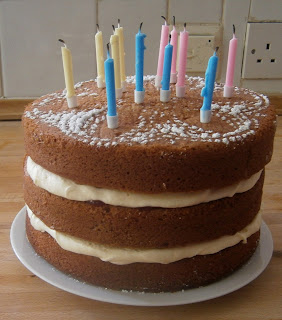 Not too much other sewing done, though, as it was a birthday week in our house.

On the actual day a Victoria sponge was requested. 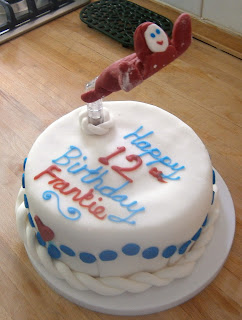 After the birthday treat of indoor sky diving (!) this cake - trying to recreate the magic of flight, but without the roar of the big fan underneath you! 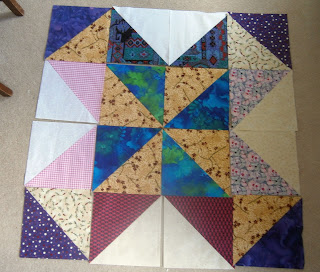 When I was sorting all my scraps I came across a pile of 10 1/2" square pieces of fabric.  Just a couple more light fabric squares added to them gave me 20 HSTs (Half Square Triangles) to play with.

This layout used just 16 of them. 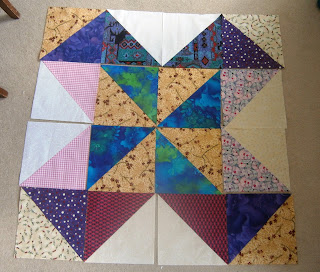 This used the same 16, but turned the corners to give a boxier look. 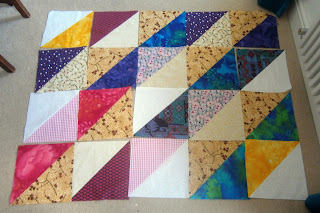 This used all 20 blocks - much more satisfying and a slightly larger quilt. 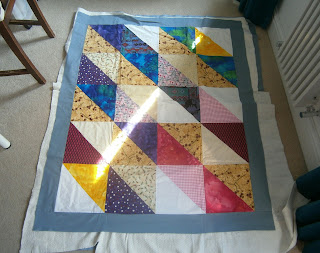 It was tweaked slightly, then borders added.

Here is it is basted and ready to be quilted - but not until the hot weather we're being subjected to at the moment cools down a little.  The room where I sew is roasting hot at the moment!

This remains a WIP! 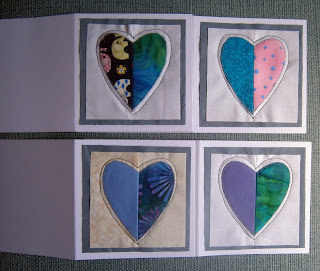 A little more sewing.  These four cards use my heart orphan blocks - layered with a slightly larger fabric square and sewn onto the card.  Quick but effective, I've already used one! 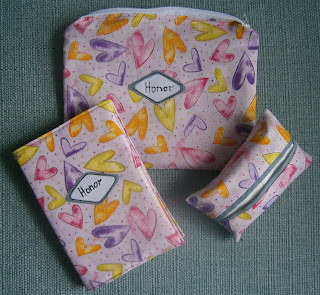 These took a little longer, but my DD1 was very pleased to give them to her friend.  It's fun to make these small projects with the fabric that my daughters think is most suitable for their chums!

I hope that you are a enjoying the weather where you are!  Happy sewing! 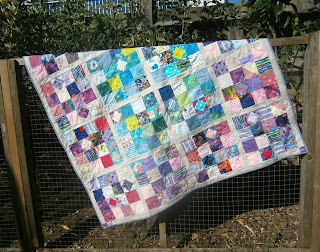 My 16 patches are sashed, bordered, backed, basted, quilted and bound!

I've also taken the chance to try a couple of outdoor quilt photos in this mornings sunshine.  I couldn't persuade our chicks to pose in the background of this first one, though, despite using the fence of their run.  They looked faintly bemused and went back to their dust baths! 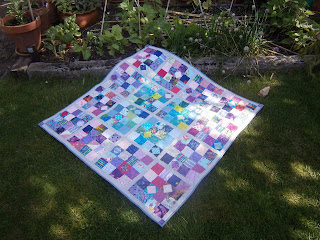 This shot shows the colour change between the centre four blocks and the others.  I'm pleased with that. 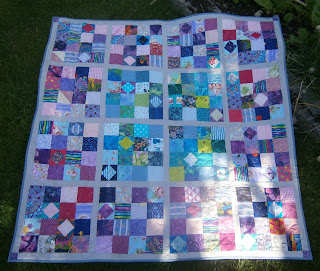 This shot shows off the square in a square highlights.

Overall the quilt is 45" square.  I originally intended to make the sashing and borders wider, but decided to live more or less within the constraints of  typical 'width of fabric'.  Of course, as I was adding the borders I realised that as I was making them with cornerstones I could have made them wider at least!  A lesson for next time! 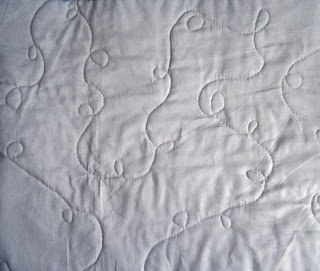 The quilting is a 'loop the loop' design based on something taught by Patsy Thompson.  I own one of her DVD's and was reminded of it by Avril recently.  A fun design!  Thanks for the reminder!

The backing is a bargain from IKEA.  I usually make a trip to see if there are any fabrics that I could use as a generic backing fabric once I run out of whatever I last bought - and although I don't love this as much as some of the prints that I've bought over the years, it's a lovely 56" wide blue grey fabric, which has a lot of appeal for me. 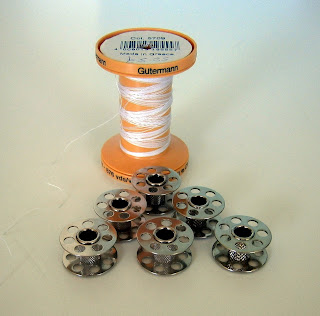 I had fun making the quilt.  As well as a scrappy top (and patchwork wadding) I decided to use all the part bobbins of threads that I had.  It feels very cleansing to have so many empty bobbins again.  I tend to have white, grey black and perhaps straw coloured threads on bobbins ready to go.  I would say that 80% of the time I use grey Aurifil for piecing, and quite often I use it for quilting too. 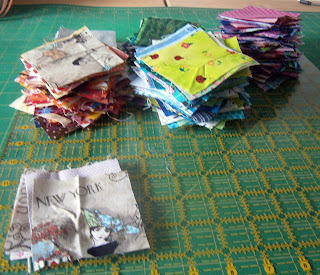 The mountain of scraps has been tamed!

Here are my resulting piles of 3" squares.  Once I'd finished cutting the scraps they were re-loaded into a (slightly smaller) set of plastic drawers.  First back out are my 3" and 1 3/4" squares, ready to make the first of this set of scrap quilts. 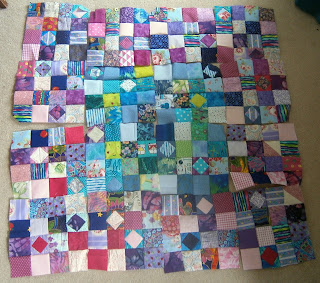 I've made the first set of 16 'sixteen patch' blocks.  The outer dozen are my pink / purple / bluish ones, with the centre four being the blue / green ones.

Although I've laid it out like this, I'm planning to sash the blocks to show them off a bit better.  I've bought some Kona 'Ash' to do that. 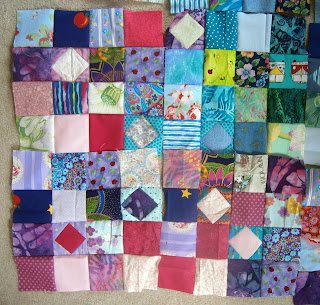 Do you like the little 'square in a square' blocks?  I've included two in each 16 patch, just like the example in 'Scrap Quilt Sensation' by Katherine Guerrier.

They definitely give it a little extra 'zing' don't they?

My plan is to work on this quilt before starting on the next set of sixteen blocks, which will just about be right for the number of 3" squares that I've harvested from my scraps.  I love to lose myself in my little bit of fabric heaven.
Posted by Plum Cox at 09:44:00 7 comments: