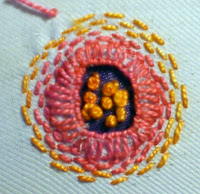 This has been another week of buttons.  Trying to get to grips with cutwork (this one called 'fire pit').  I haven't finished this one yet, so it's still stretched out flat. 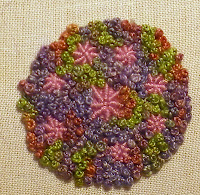 This is another french knot and web stitch one, called 'pink pools' - this one still out flat as well. 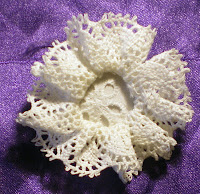 More cutwork - this one just called 'lacy'.  I'm not sure that I like this style enough to try it again, and there are several errors that I'd correct if I was going to......

This finished button has stuffed bits and scrim and french knots and bullion stitches....and I haven't got the colour right in the photo or you'd be able to see that it's a lovely bright turquoise! 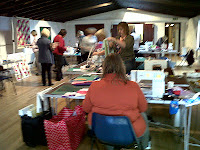 Button making was put aside on Saturday so that I could take part in the Jan Hassard's 'Interwoven log cabin' workshop with about 15 other members of my quilting group.  We worked hard making twisted log cabins (some clockwise, some anti-clockwise) - some (like Benta!) worked faster than others (me) and completed or nearly completed lots of blocks.  I managed six twirling one way and half completed six twirling the other....... 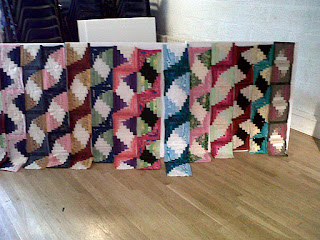 As we each completed our first six blocks we pinned them to the project board to get an idea of how the pattern would work once we'd completed our blocks.  My blocks are the oversized blue and white ones (my 1/4" seam was *very* scant on the Featherweight).  It was a fun, but tiring day. Thirty-six blocks are all that we need to make a wall hanging size quilt.  I like the idea of making them right now, but the 'things to do list' seems to be a bit full at the moment!

Why not visit Benta's blog to see when she thinks she might finish hers?

Meanwhile, I'm hoping to catch up on my button course this week and make a split cutwork button, a toggle, a Dorset button, a Singleton button, a half and half button and finally a ball button.  That's all I need to do to complete the course so that I'd have make at least one example of each type.
Posted by Plum Cox at 12:02:00 3 comments:

I've done some more work on the buttons that I'd started last week, and started a few more too - I've gone button crazy!

This is what 'button 1' turned into once I'd added more bullion stitches and french knots in variegated threads.

Out of order - this is button number three and my least favourite so far.  I need to try the lacy edge stitch again, this time with the instructions in front of me, instead of trying to remember them whilst waiting in a coffee shop for the girls to finish their activities! 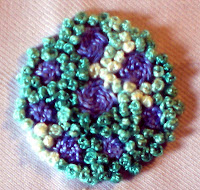 This is what 'button 2' turned into - lots of french knots again, and I've called it 'mossy pools'. 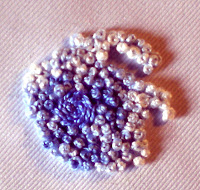 And one that looks like maggots growing.  Good practice, but not a thing of beauty, more scientific interest!

I think that my next button adventures might include beads or tiny other buttons (although a button decorated with buttons is approaching Simon's reason for not ever planting onion setts - planting an onion to grow an onion just feels wrong, and I'm not sure that buttons decorating buttons, pretty though they may be, might just feel a bit wrong to me!).

So have I just spent the week making buttons?  Pretty much.  A couple of blocks (one machine sewn, one hand sewn) for my C&G course, and that's it.  On the other hand I have managed some sketching, some tidying of the craft room, and lots of extra sleep, so it hasn't all been bad! 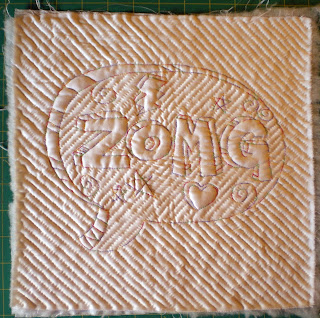 Hurrah!  I've managed to complete a hand quilted square with quite dense background quilting, without needing to pleat it or worry about flaring or other distortion as I've finished it!  Perhaps this means that I'm either getting better at marking the cloth or better at keeping the tension even when I'm sewing (still without a frame....).  This is about 11" square, and I have no idea how I will use it or what I will use it for.  Perhaps it will make a good cover for a scrapbook at some point in the future.  I'll let it 'mature' in the cupboard until I decide.

Having finished this, I wanted to choose some more hand stitching to do - I like to have something to do with my hands whilst I'm being a 'ballet mum' and sat waiting, and sometimes I like to stitch in the evenings too when I have enough energy.

I came across a course to hand embroider buttons, run by Karen Ruane, and decided to spend my birthday money on the course and a few more threads and self-cover buttons.

This is my first attempt (still in the mini hoop) using french knots and bullion stitches.  Not a finished piece but I'm not sure what to do with it.  The middle part looked too like a creepy crawly, so I added the other french knots around it....but I think that they've taken something away from the total rather than added to it.  I either need to add more light knots or just put this aside as a learning piece, I think!

This is my first attempt at web stitch.  The top three are quite full, the lower ones are less full. and show the structure better.  Obviously this is in it's early stages.  I think that I'll pull out some of my hand dyed variegated threads now that I know that I can form the stitches!
Apart from this I've just made a couple of patchwork strips as part of my quilting groups ongoing 'sew a row' challenge.  All will be revealed when it's put together in about 6 months time!
Hope that you are going to be happy creating something this week!
(oh, and make sure you listen properly when the radio is on.  I've just mishead "wintering in the Southern Hemisphere" as "windsurfing in the Southern Hemisphere", which I did think was an odd occupation for a cuckoo......lovely mind-picture, though!)
Posted by Plum Cox at 12:04:00 4 comments: 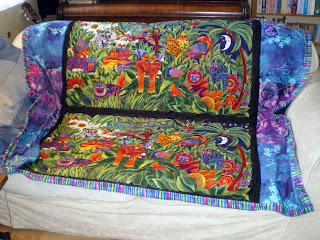 This is DD2's camp blanket.  No, she isn't old enough to join Brownies yet.  Yes, she did get to take DD1 to a Brownie camp fire last week where she saw how camp blankets could be used.  Yes, I had already bought the Laurel Burch panel and the fleece for backing it, and DD2 was able to choose sufficient fabric for the badge panels on either end from my stash.....  I'm pleased to report that she's jolly happy with it!  (There is an element of indulging her slightly this week too, as she is missing her big sister who is off on a school residential week - the longest they've been away from each other since DD2 was born). 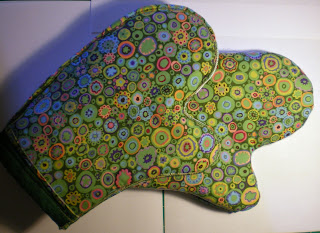 My other sewing was of the domestic variety again.  Oven gloves.  A long and fruitless search for the right shape and texture oven glove is over - I've used a combination of Insul-bright and cotton wadding and a FQ of Kaffe Fasset to make my own.  What the photo doesn't show, of course, is that I was making them whilst feeling a bit under the weather, and although I knew that I had to reverse two shapes, as I changed the way that I was making them part way through I got a bit muddled, so each glove has a bright side and a white side both in and out..... oh well, kitchen utility items don't have to be perfect, do they?!

I enjoyed Jan Hassard's talk at my quilting group on Monday.  She brought along an astonishing number of quilts from around the world - very interesting and very inspiring.  She also showed a few of her own - including the interwoven log cabin one that we'll be attempting a simpler version of later this month at a workshop that she's giving. 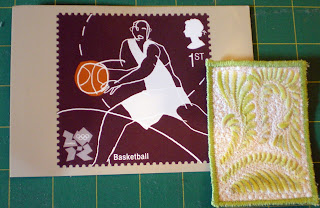 My last photo - which I should really have cropped just to show the ATC (artist trading card) is to try and show the amazing micro quilting by Tracey Pereira.  If you ever come to visit ask to see it, as it is amazing - look at how detailed it is,both quilted and hand coloured -  and it's just 3 1/2" x 2 1/2".  In fact, if you make it as far as my craft room you won't need to ask as it's going to become a permanent feature to remind me what to aim for in quilting!  I was very lucky, as this was just one of many lovely ATCs and fabric postcards that I received on my birthday - being part of a couple of birthday swaps is lovely!