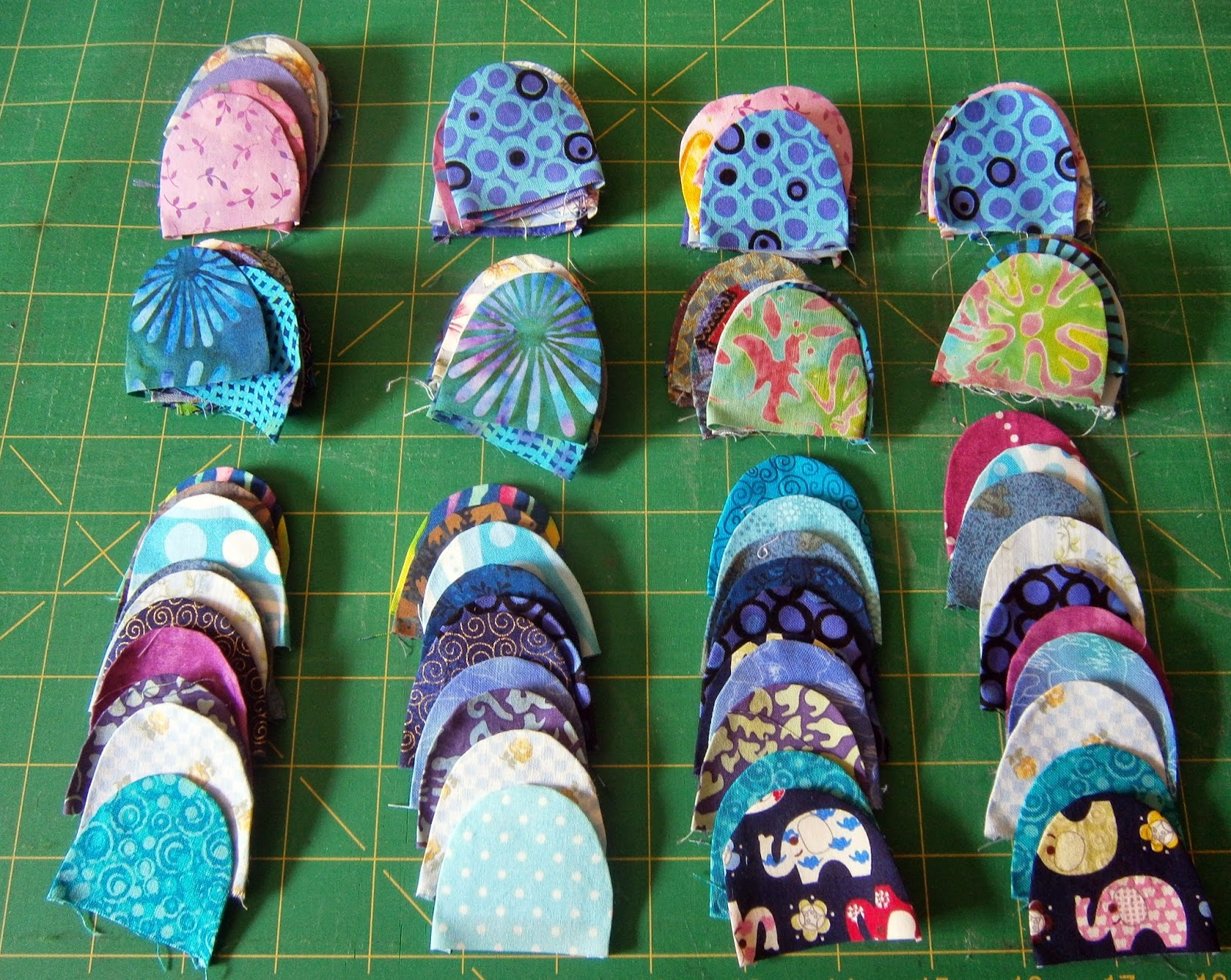 There is something very satisfying about seried ranks of prepared pieces!

These were the scallops as I was counting them into sets (groups of 30 scallops - 12 for the shorter borders, 18 for the longer ones).

I've used my cool colour scraps - and it's lovely to see part of an old dress, fabric I used on the girls pushchair, a little from the very first set of FQs that I bought.....all sorts of delights from my quilting life!

Here are the short borders laid out.
The top row are machine appliqued, the missing row is on the sewing machine, and the two bottom rows are waiting for their turn for the zig zag process.

This week hasn't been a week with much time for sewing -but I have cleared out / boxed up a lot of my sewing space (which is also library and study as well as general dumping ground, it turns out!) and been looking after my DH who is rather immobile following an op on his foot.  More of the same for the next week, I think, although we'll have a better routine in place, so I'm hoping I'll carve out a bit more sewing time again.

Hope that you are finding time to enjoythe things that you love too!
Posted by Plum Cox at 10:26:00 13 comments: 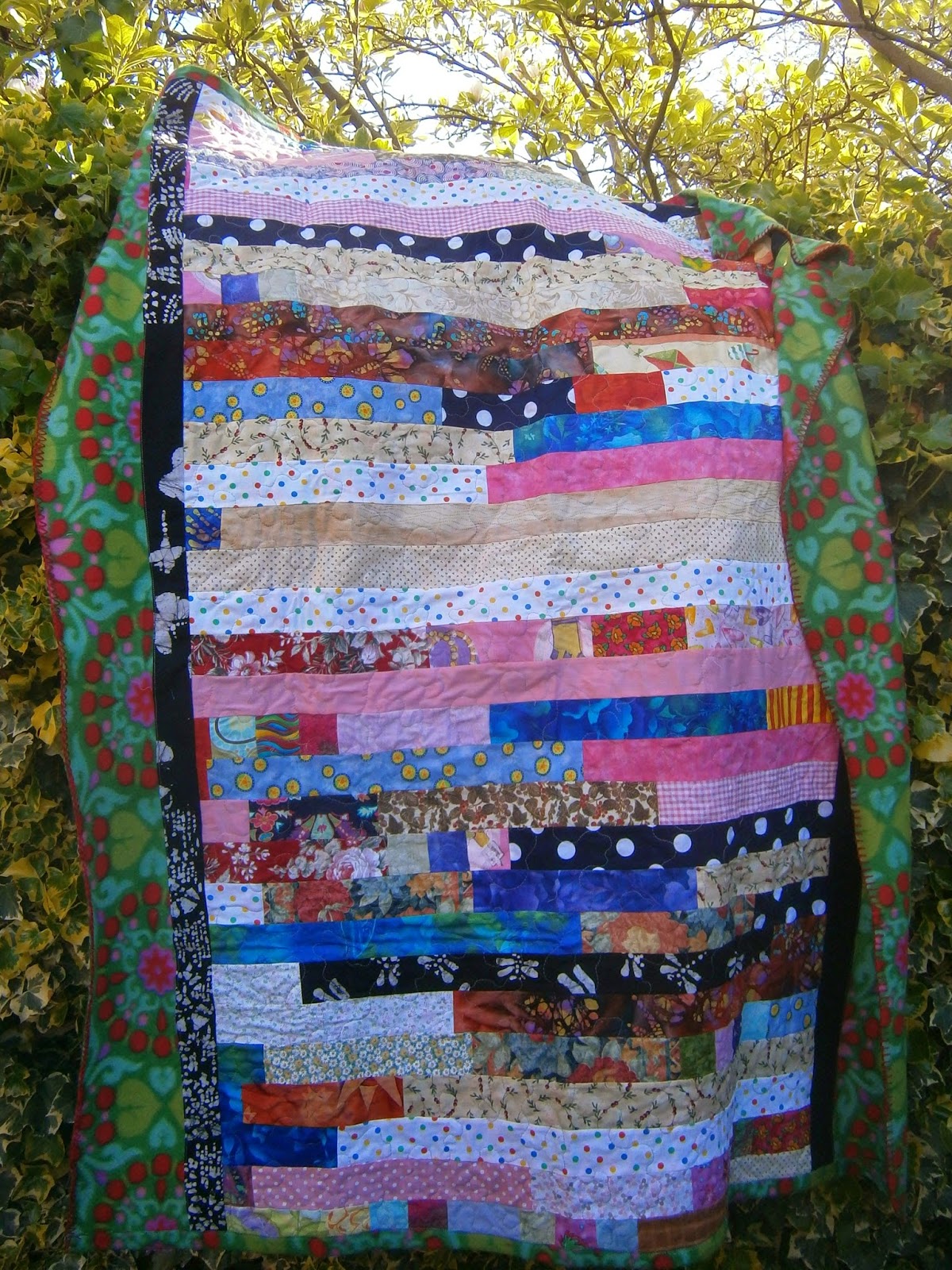 So lasagne and scallops may not be an ideal meal, but it entertained me that the photos I have to show you this week both have food names!

This 'lasagne' quilt was made by me a few weeks ago, as part of my scrap busting burst of energy.

I suppose that I should call it a coverlet rather than a quilt, as it is quilted straight onto fleece rather than having three layers.

It was fun and fast to sew, but I had hoped that the light and dark fabrics would distribute themselves more evenly across the whole piece.  I know that I could have ripped some stitches out and changed it, but I felt that that would be cheating, so left it more imperfect than perhaps I really like. 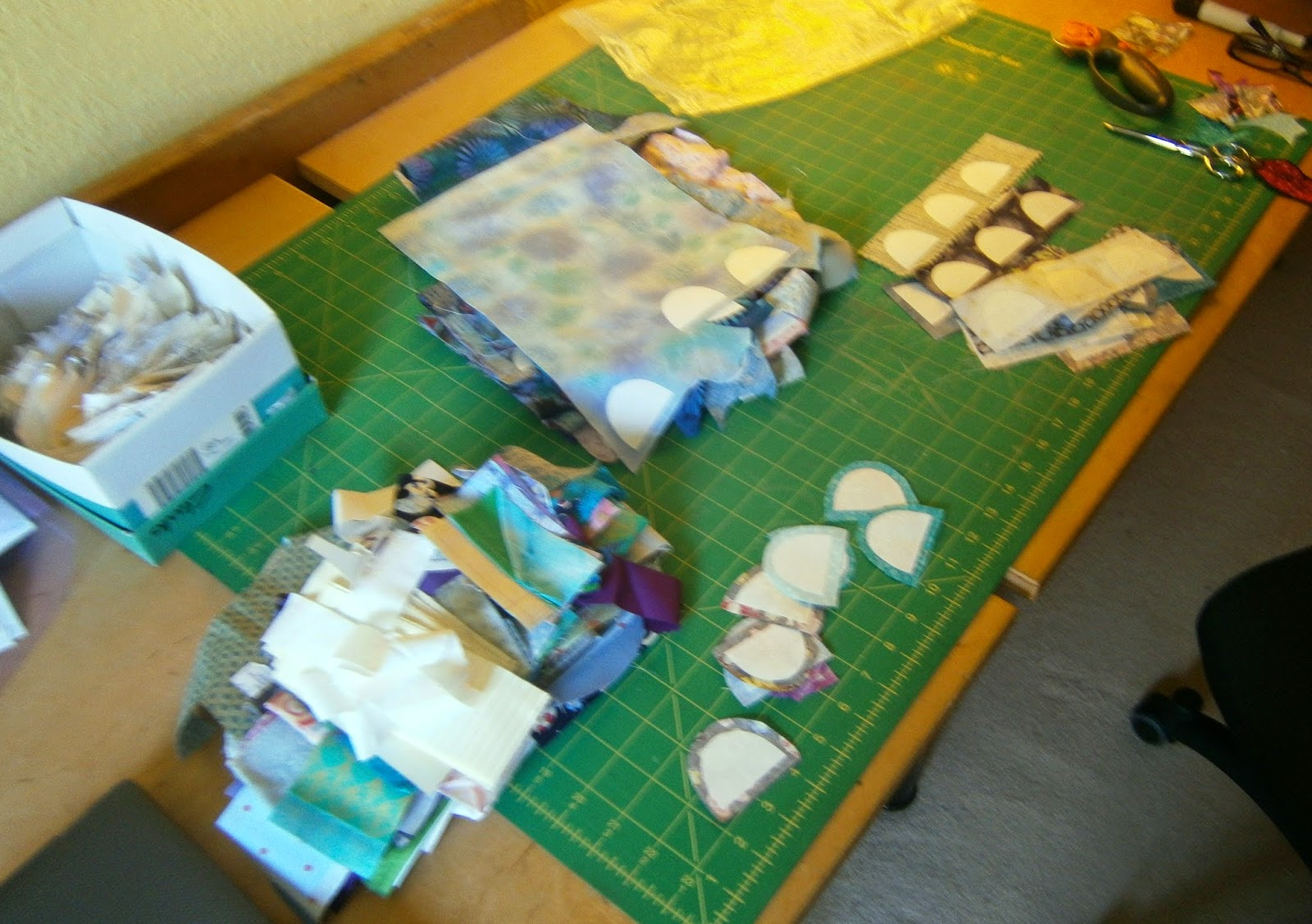 The scallops (not the edible kind at all!) are the ones from Esther's 'Heart It' quilt.  I've finally got around to starting the ironing / cutting / gluing process with the shapes that I'd got others to cut out for me.  I can only cut a few each day, though, as I'm still being careful with my wrist.

In the shoe box are the bowtie blocks from the quilt.  Not quite finished them yet, but nearly!  It's nice to be making progress on this quilt again. 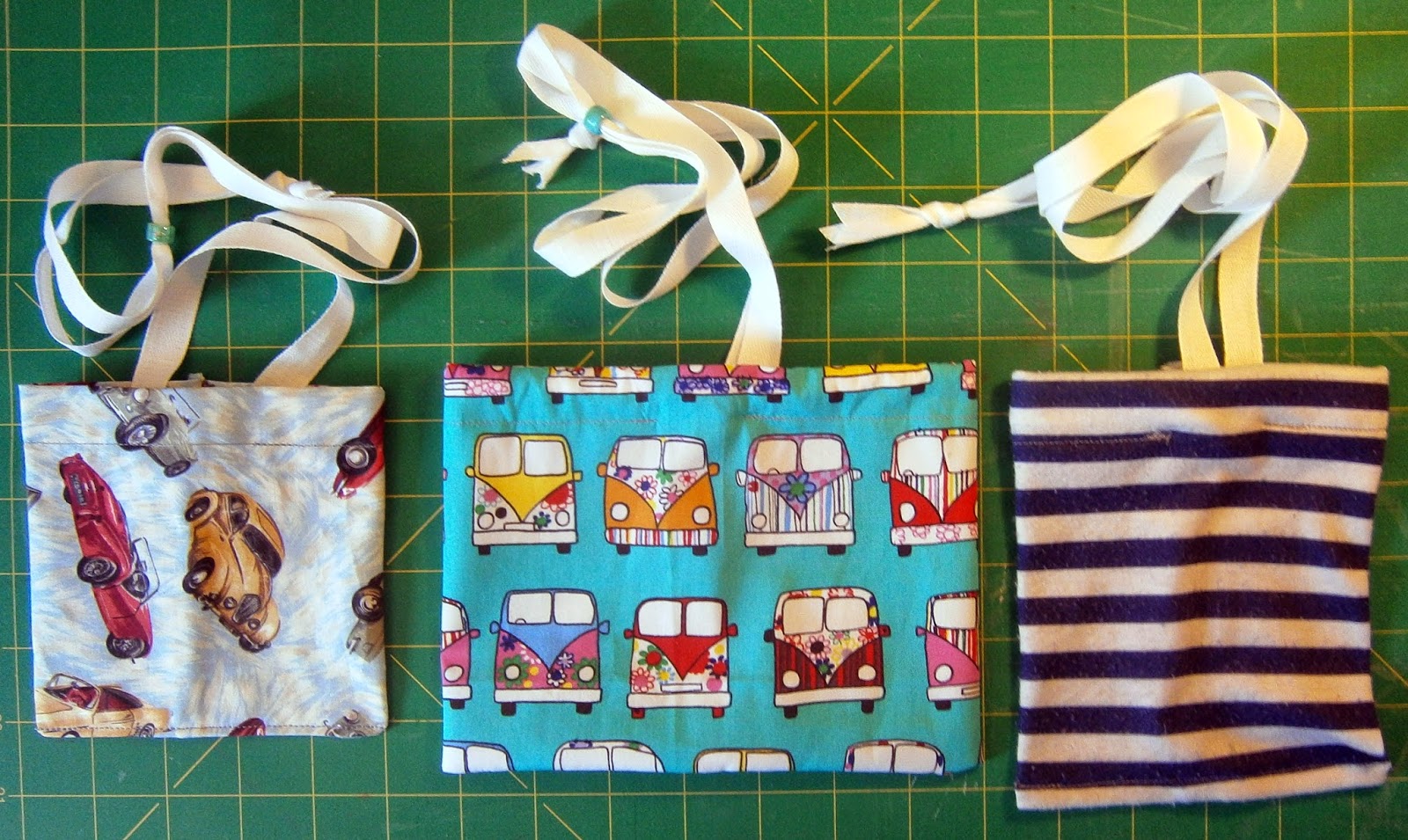 I've really enjoyed being able to do a little machine sewing this week - time and my (slightly less rubbish than it was) wrist have allowed it!

These 'wiggly bags' (bags for looking after the 'central lines' put in for people receiving chemo therapy) were made for a friend.  Slightly different sizes until I hear which is the best size for him. 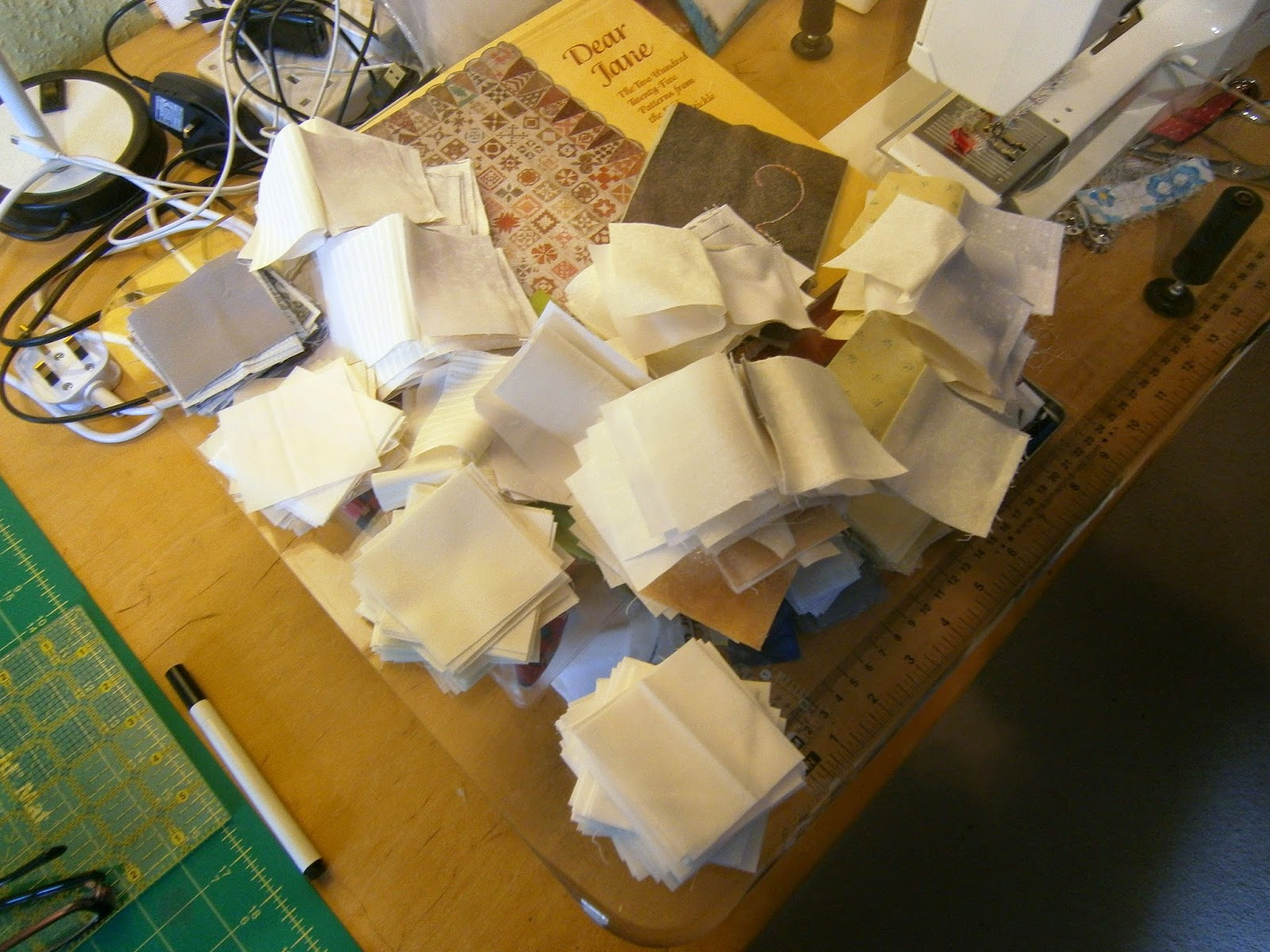 I've also made some progress on Esther Aliu's 'heart it' pattern.  Here are the 'bow tie' blocks - some just as 2 1/2" squares, some partially constructed. 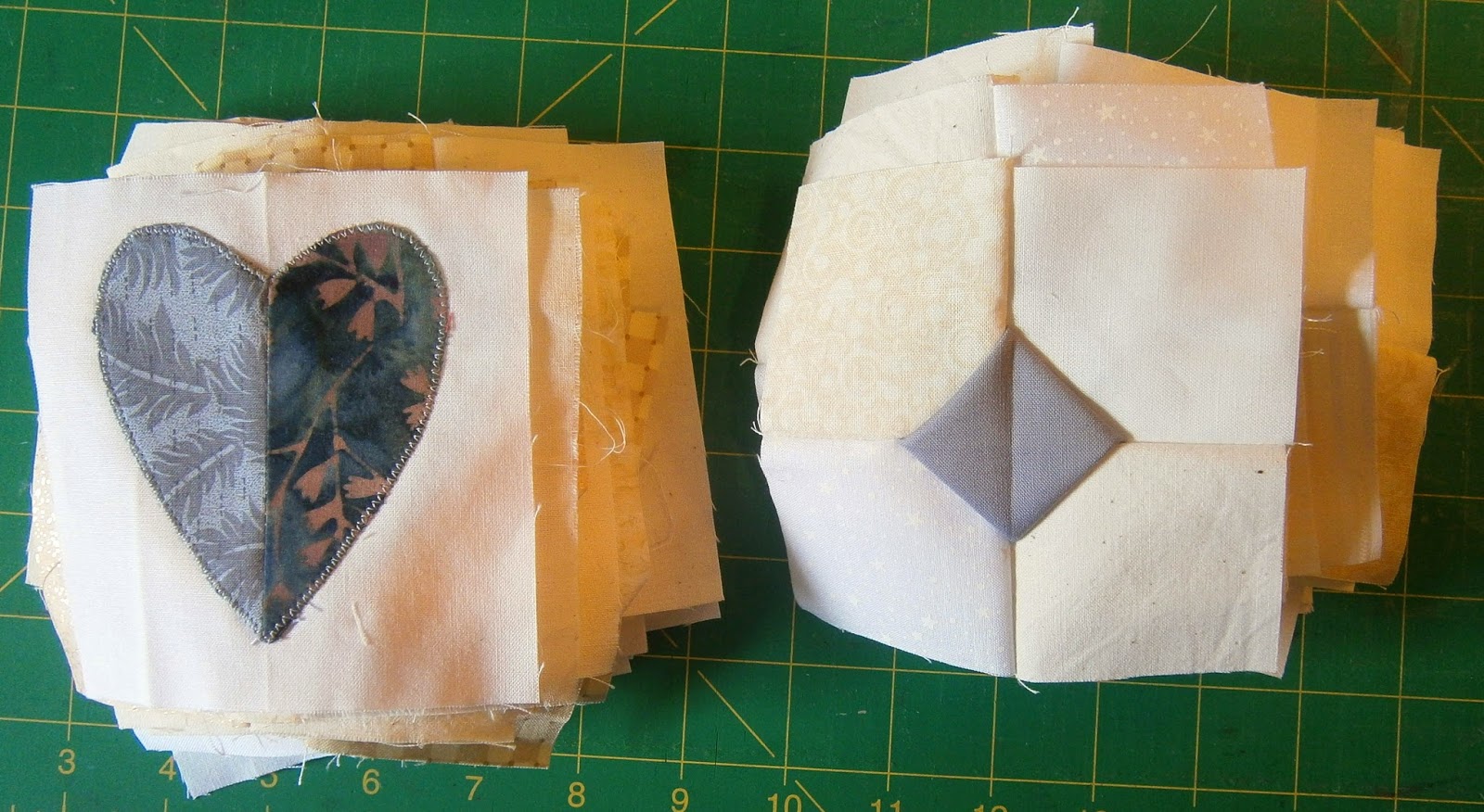 I'm hoping to complete all of these blocks this week.  I'm making good progress on the bow ties, but still have only sewn around one of the applique hearts..

Then it will be time to start working on the scallops which were cut out before the Easter Hols.  Lots more still to do! 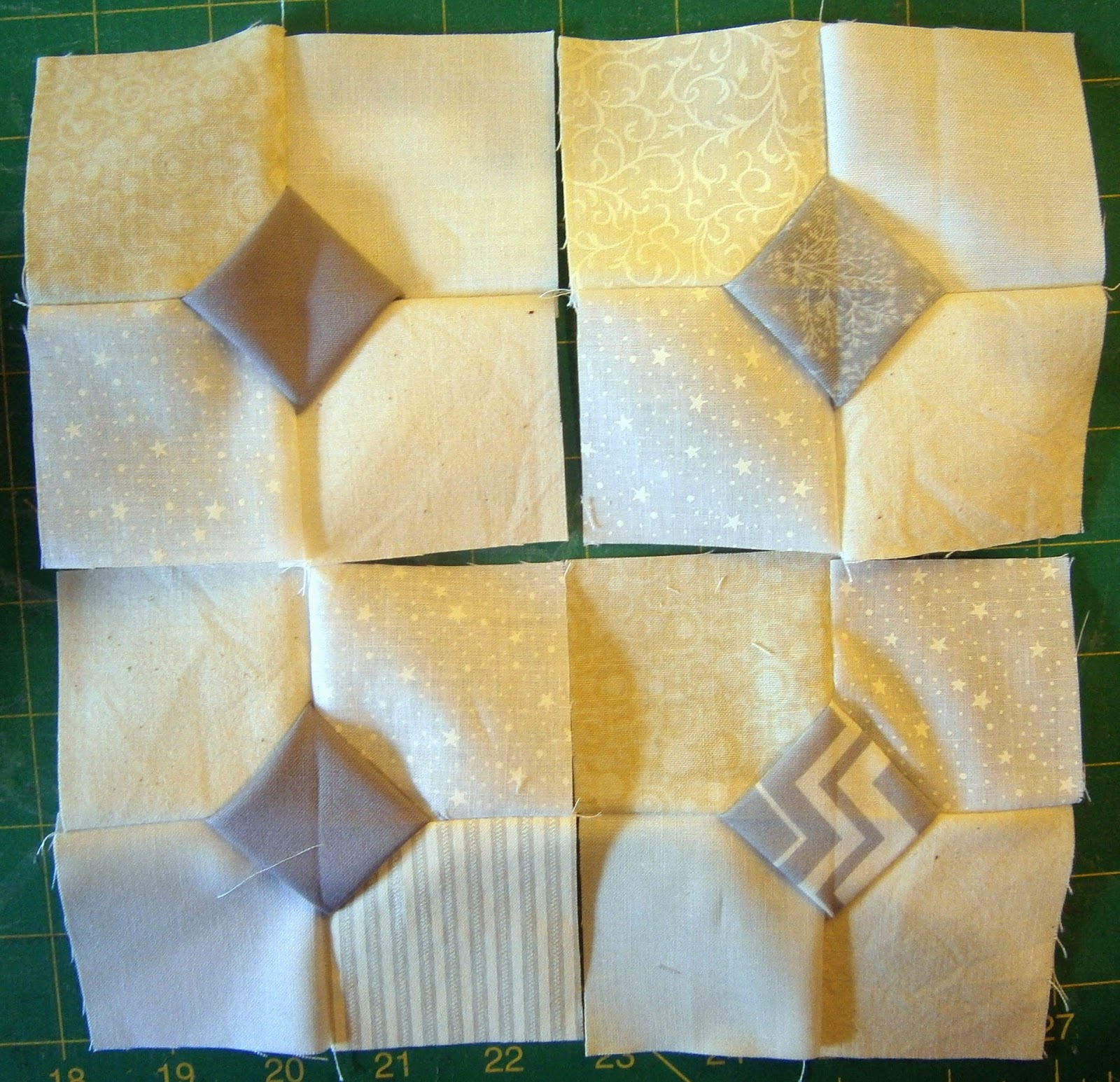 Difficult to pick out the white on whites and creams in the photo - it's a bit easier in real life!  I've gone as scrappy as I can without buying any more fabrics.  I'm quite pleased with the range that I had for the blues / greys / creams, although it turns out that I didn't have as much 'white on white' as I thought.

I've also been entertaining myself by drawing up a list of projects to make / finish over the next few months.  There is a chance that my sewing room will be out of commission for a while so I'm planning on projects which won't rely on full access to my stash and rarely used tools, just in case they are in storage.

Of course, it turns out that I've now got five projects with only minimal cutting required for them, so I should have plenty to go at!
Posted by Plum Cox at 11:29:00 2 comments: 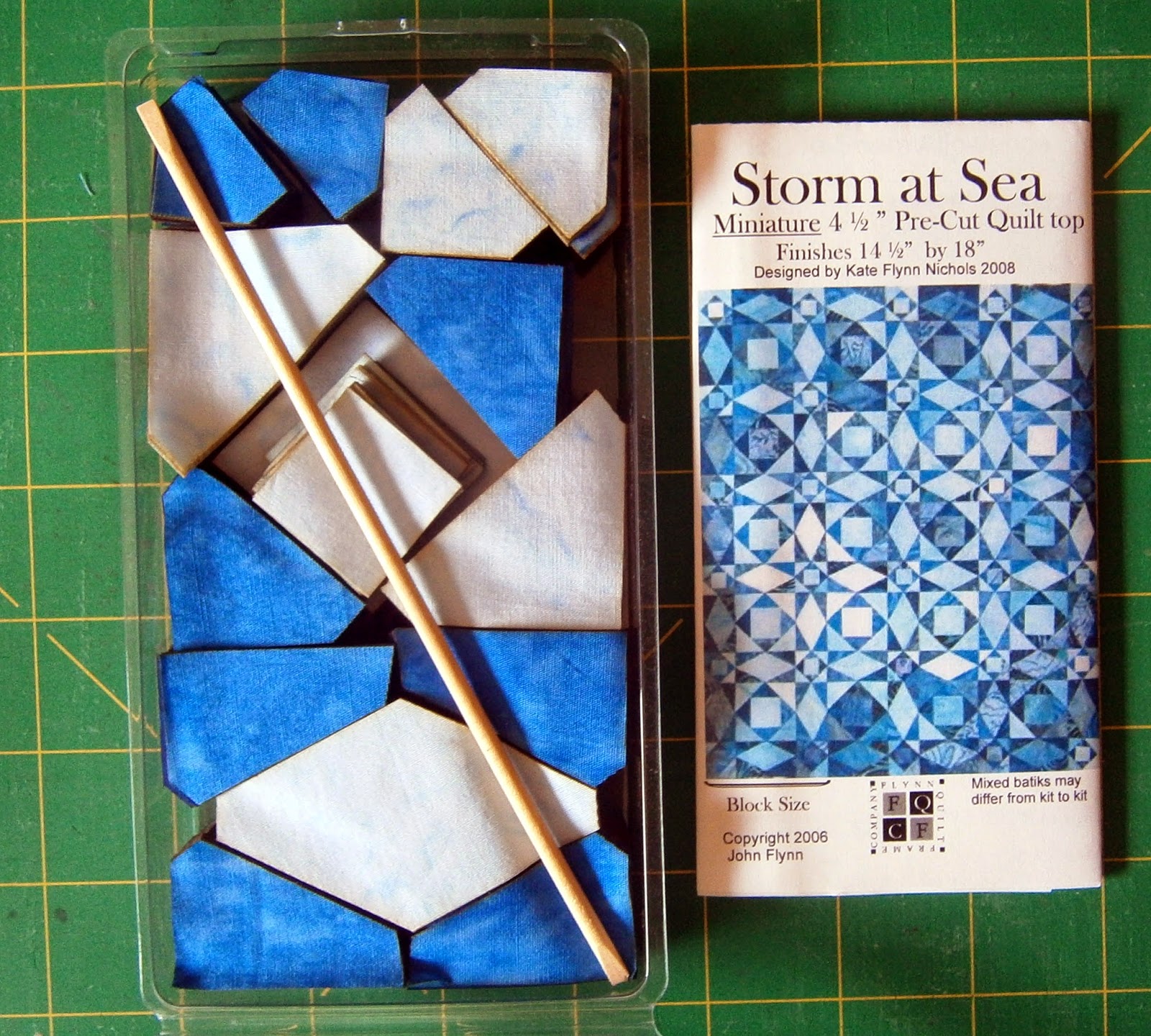 Receiving real mail, you know, the sort that arrives through a letter box rather than into a virtual in-box, is always exciting.

This mail feels really special - my kit has arrived!

I've shown it against my cutting mat so you can get an idea of how small the pieces are.  What you can't see is the number of different blue batiks in each stack - or the little 'included in your pack' index which is on the underside.

Isn't it lovely that you are given a wooden stylus to help you run the little pieces under the machine foot?  I like the attention to detail.

Of course, what doesn't arrive through the mail is additional time!  As I am in the midst of the Easter Holidays this pack has been carefully reclosed and put to one side until I have more time available for sewing and concentrating.

Hope that you are finding some sewing or crafting time this spring!

So this week I may not have done any sewing (except for emergency repairs on a school badge!), but I have ordered myself something that I've wanted for years!

It's a miniature 'storm at sea' quilt kit.  Pre-cut with lasers by the Flynn Quilt Frame Company.

It hasn't arrived yet, so I can't tell you about it properly, but just based on their customer service so far (which has been excellent!) I have a feeling that it's going to be great.

Of course, there may well be a lot of cursing in my head when I start making it - after all, aiming for accuracy with tiny pieces may not be my strong suit!

Still, I'm excited about the idea of having a mini quilt to make without needing to do any cutting - thus saving my dodgy wrist this task.

See, there are always different ways to do something that you want - my first quilt kit order!