I made some owl bunting last week  for my good friend Benta, following her idea of bunting making.  Mine was made using Jennie Rayment's pattern.  Good fun! 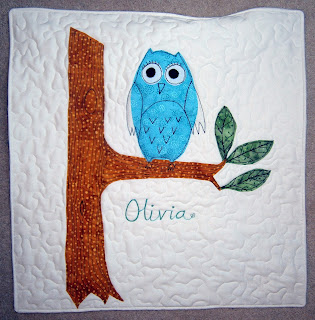 I was thinking about owl jokes - and entertained myself by thinking of making this into a cushion for 'Owl-ivia'.  DD2 objected, though, and as we were making it for one of her friends I reverted to the conventional spelling - although I suspect that there might be a 'Happy Birdy Owl-ivia' card made to accompany this! 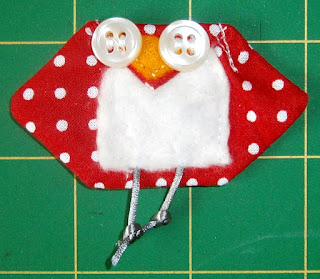 These photos aren't showing the right chronology today.  This was my final owl - reduced in size so that it started with two 2 1/2" squares.  You can see from the cutting mat behind that it ends up at about 2 1/2" x 1 1/2" - a perfect size for a fun brooch! 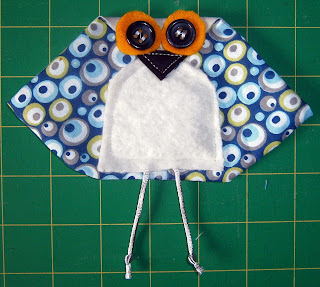 This was my bunting trial - a great pattern that uses two 5" charm squares and a few oddments of felt / buttons etc.  This particular owl is likely to decorate a card or a book cover. 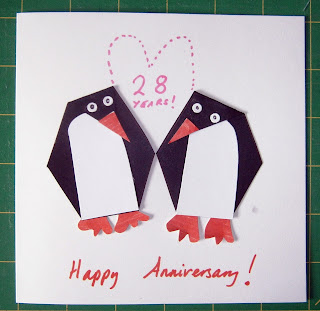 Finally, I moved on from owls!  Inspired by Jennie Rayment's penguin bunting (doesn't that sound fun?) I made a penguin card for DH.  Funnily enough, he bought me a penguin card too.
Made my DDs laugh, that he bought something that he knew that I'd like, whereas I made something that I liked rather than necessarily choosing his favourite things.  I explained that clearly it was my DH's good nature that had helped our marriage last so long!

Inspired by Benta (thank you!!) I've run up some quick 'off to uni' or 'back to uni' bunting.

Isn't that a nice idea that she had?

I cut some 5" squares, sewed them together and turned them through (cutting an 'x' in the middle of the front square which was then covered up), added wadding squares (2 1/4" square) and fusible letters / buttons.  Easy to make and fun to root through the button box to find appropriate buttons.

I don't know if it will be appreciated or not, but this mad old aunty likes the idea, which makes it worthwhile!  It could decorate a door or a pinboard - or the inside of a cupboard if the recipients don't like it!

Other sewing projects are in my head at the moment, and I'm hoping that they will get to the cutting and making stage in the very near future.  I feel a scrap quilt coming on - in time, perhaps two or three!
Posted by Plum Cox at 12:17:00 4 comments: 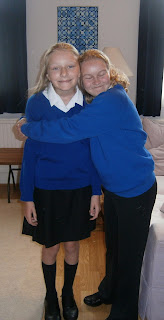 No quilting or sewing in this post, I'm afraid - a change to my usual output!

The almost obligatory 'back to school' photo of DD2 and DD1.

Only taken and displayed to cause them maximum embarrassment to them, of course!

The rest of this post is devoted to the results of the family glass day that we had in the summer.

If you live close enough to Richmond Upon Thames to try out the family course at RACC I can really recommend it! 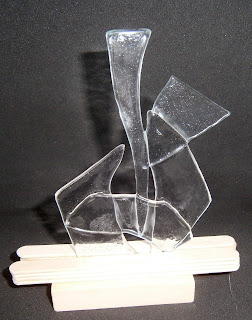 The first four pieces are made of float glass which was cut, tacked together with PVA and then kiln fired.

This first one is stood in my homemade stand and is DD2's apple and leaf.  Isn't it terrific? 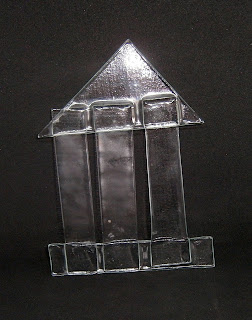 Our 'group' piece - we are still deciding whether it's a beach hut or a temple! 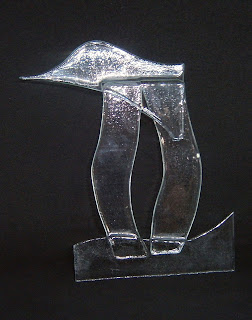 My penguin - I'm pleased with it! 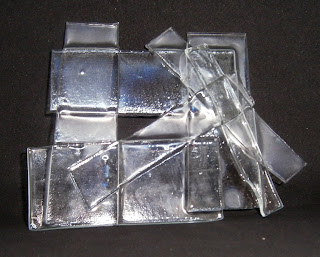 DD1's abstract piece.  Really interesting to see how the additional layers of glass worked in the kiln. 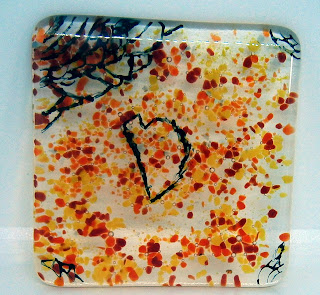 These pieces are made from bulls eye glass and frit (tiny pieces of coloured glass).

DD1's zentangle and mixed colours.  Love how this turned out! 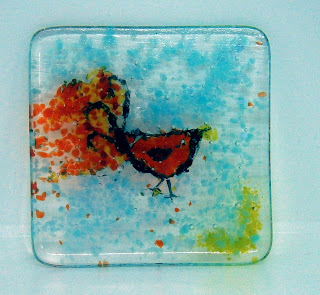 My attempt at a bird - it looks better in the photo than in real life (!).

Another time I'd use less  frit.

I think that these are terrific for our first ever go at anything related to glass.  I'm proud of my girls for embracing the day and getting the most out of it!
Posted by Plum Cox at 10:52:00 1 comment: 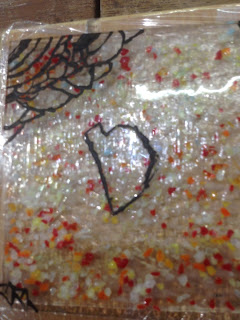 We've just reached the end of the school holidays for my DDs.

We've had a brilliant time!

Part of DD1's holiday 'tasks' (not quite homework!) was to compile a diary of what she got up to and to make some a collage to show some of it.  In fact, she decided to make an A4 sheet for each full week - and a great job she made of them too.

It made me reflect on what we've managed creatively over the holidays, conscious that I'd not done nearly as much stitching as usual. 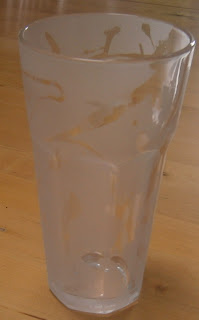 We went on a creative glass course as a family.

Above is the start point of a fused piece using bulls eye glass, enamel and frit.  We haven't got our pieces back as they are still being fired (or are cooling down - still in the kiln, anyway).  We're looking forward to seeing how they turned out!

We also got to mask beakers - this by DD2 was masked with PVA glue.

The other skill was glass cutting - and then arranging the shapes to a pleasing form before they were fused.  Again, results not yet available! 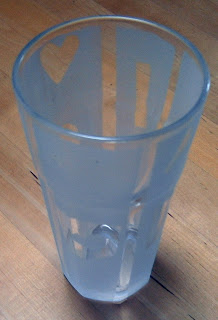 This beaker by DD1 was masked using masking tape. 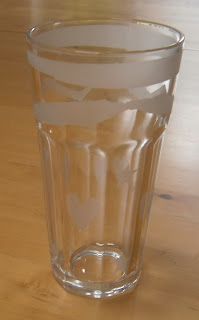 All three were sandblasted by me - something that I'd never tried before. 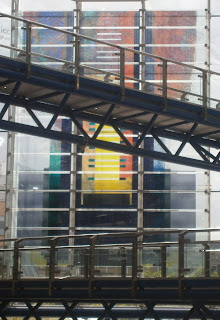 Of course, nothing like the input we discovered that my step sister had had to this large (huge!) stained glass panel at Symphony Hall in Birmingham.

It was only by chance that we happened to go through it whilst on a day out and that she mentioned it.  I've been looking at it every year when we visit my brother in Birmingham, and we didn't have any idea that she'd been involved in it! 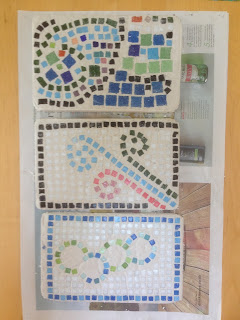 Back to my and my DDs.

We made our own mosaic panels, inspired by some mosaics that we'd seen whilst on a treasure trail around Kingston upon Thames. 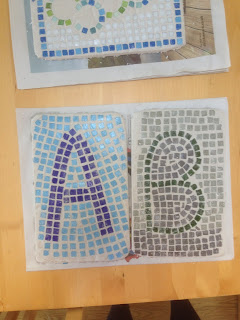 We enjoyed making them so much that we made an initial panel for two of my nieces. 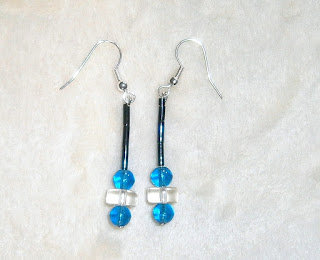 Then there was the jewellery making, 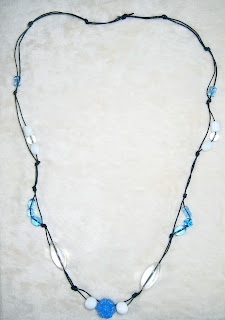 A little selection shown here, using lovely glass beads that I bought some time ago. 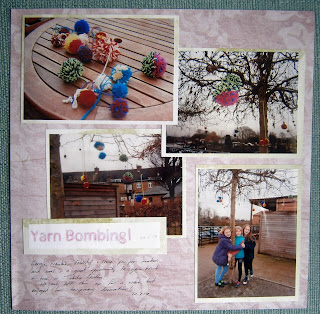 Of course, I was taking some time to work on my scrapbooks too.  I've made dozens of pages!

We also made over a dozen handmade birthday cards using various papercrafting techniques, and my DDs have also spent time colouring and made Hama bead items. 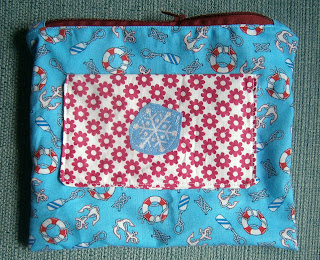 Finally, on the LAST DAY of the holidays, my DDs decided that they wanted to sew!

Zippy pouches, of course.  The first DD to sew wanted a pocket on hers.  No problem.

Of course, then the second DD to sew wanted a pocket AND an embellishment. 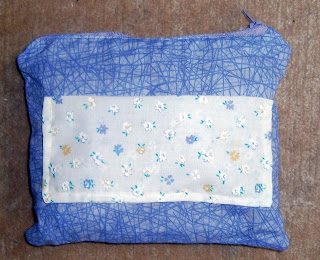 They both proved themselves (once again - at some point I'll stop being surprised that even after a long gap between sewing sessions they don't lose their skills!) to be really quite good at wielding a sewing machine with competence!

I was still needed for technical instruction - simple zippy pouches are something that I make without written instructions to share - but they didn't need nearly as much help as I thought that they might.

Anyway, taking stock,  I sometimes want to berate my DDs for not doing much creative stuff and spending more time on screens and tech than perhaps I'd really like to see.  However, looking back at what they've actually done, I'm really rather proud of them.  They may or may not take on a crafting hobby when they are older, but at least I'll know that they've had the chance to try out a few things to see what they think of them!
Posted by Plum Cox at 12:54:00 1 comment: