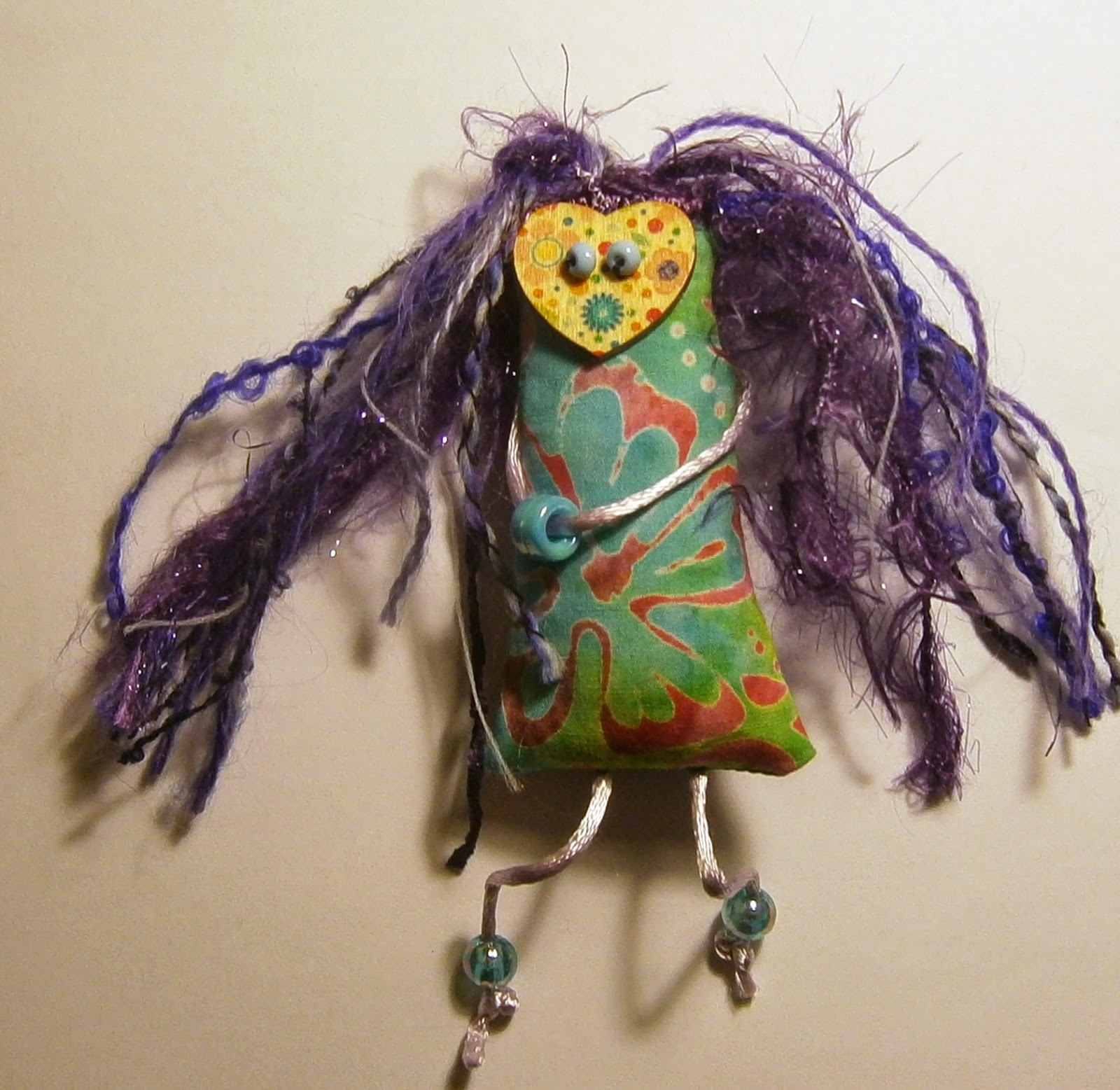 Following the instructions that I read on the ThreadAddict blog, I made a couple of little wild women - and I can see the appeal of making more!

These were 'quick and dirty' versions, with not much in the way of beading or embellishment.  Still, in 20 minutes plus time to sew on the face, eyes and a brooch back, they were spectacularly quick to make and a joy to give! 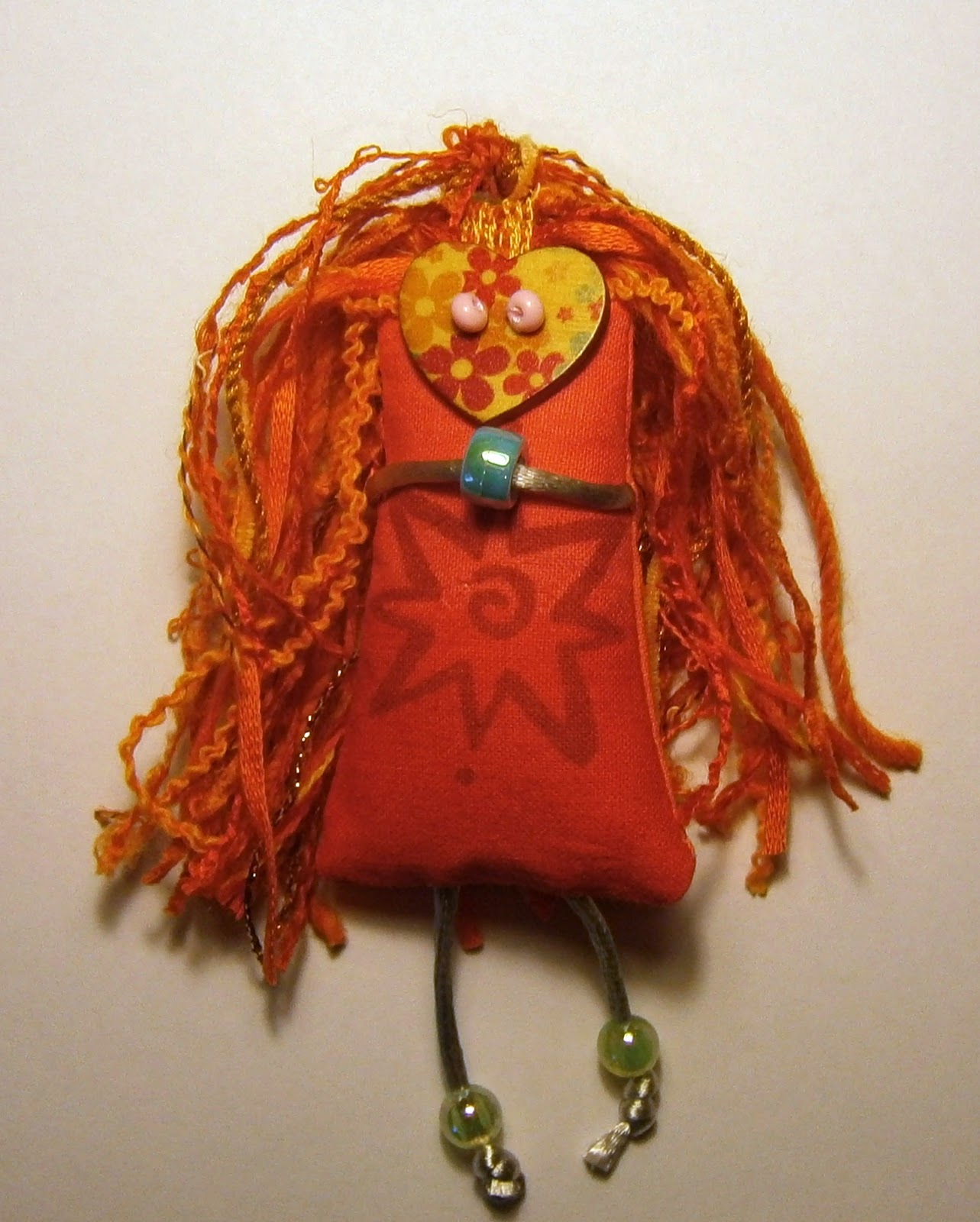 I'm happy to say that I have 'texture packs' in other colours too, so lots more options from the scrap basket available!

I think that going wild in 2015 is a jolly decent plan - but perhaps I'm a bit Christmas-holidayed out!

I did manage two other quick makes before Christmas hit us. 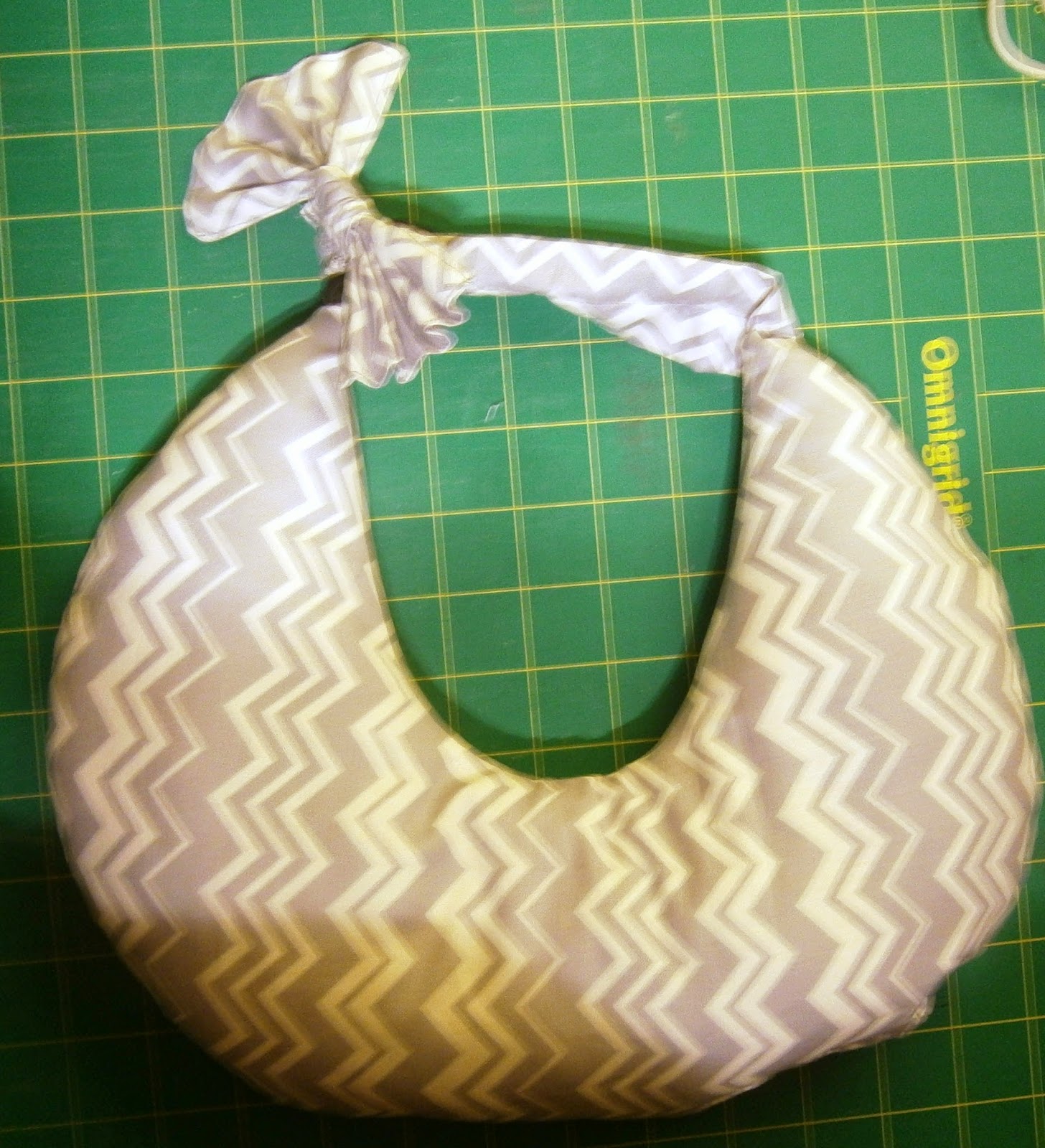 Another anti-ouch pouch - this time in grey (how lucky that I'd impulse bought this grey chevron fabric and it arrived the day before the request for a grey version did - having a fabric stash is lovely !). 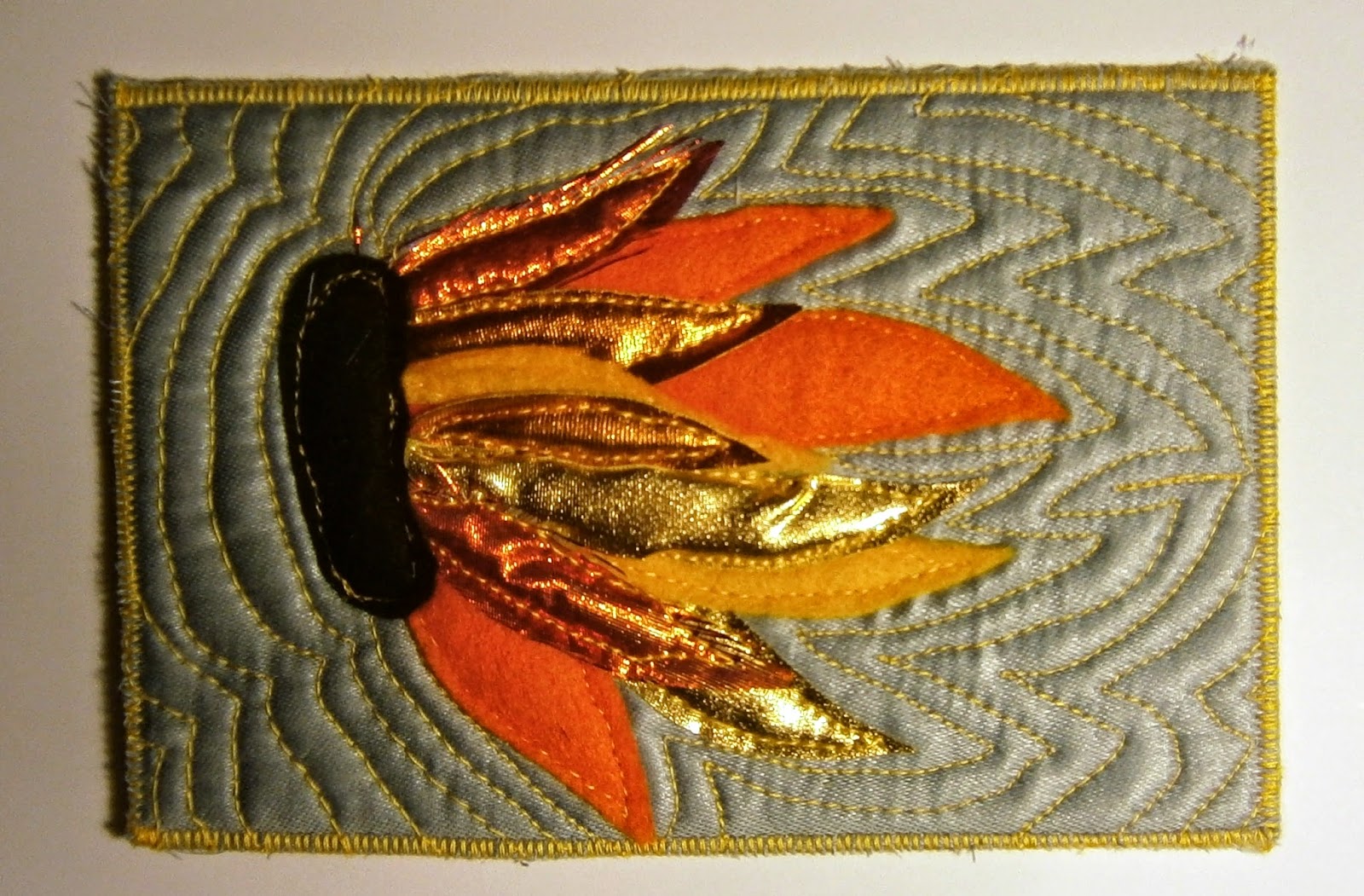 I also made my final fabric post card of the year - this one had the theme of 'fire'.  I would show you it the right way up if I could, but I'm having a bit of bother with some of the settings on my PC at the moment, which is slightly limiting my abilities in some of the programmes that I run.  I'm hoping to find time to look for the solution soon!

In the mean time, HAPPY NEW YEAR!  I hope that you are looking forward to 2015 with peace in your hearts and a sense of impending renewal. 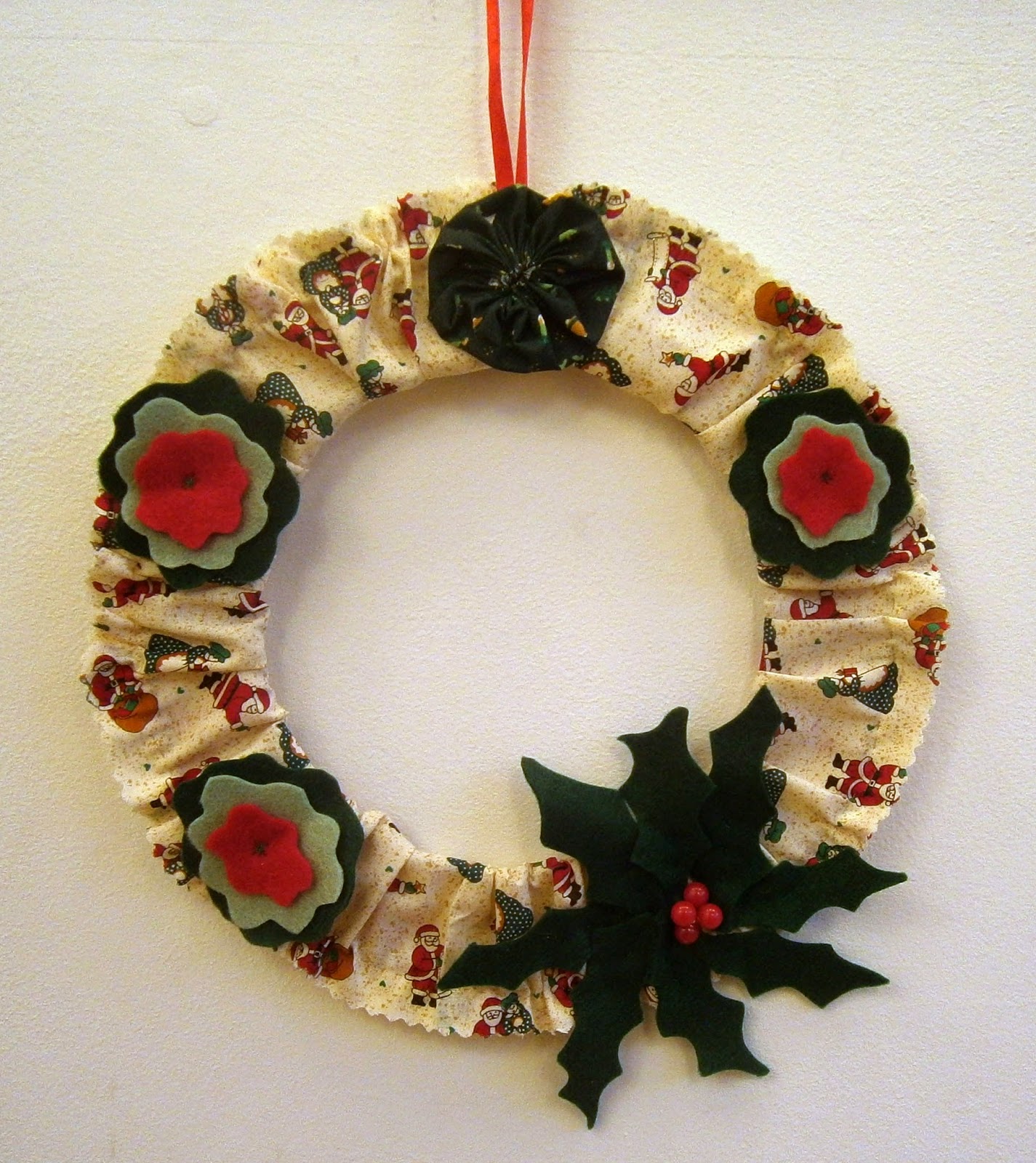 I hope that you have completed all your sewing of Christmas gifts, drawn close to your family and are settling down to enjoy a wonderful Christmas!

This is my latest Christmas offering - Santa fabric, felt, a Suffolk puff and a wire wreath frame.  Very simple to make.  You want to know how I did it?

I measured the width of the frame, added an inch, and cut a width of fabric strip of that measurement (my frame was 2" deep, so I cut a strip 5" deep with a pinking cutter).

Then, fold the fabric in half around the frame and sew the long edges together with a running stitch - they will tend to self gather, which is handy!

Add a hanging ribbon and whatever decorations you like that you can create.  I did wonder about adding baubles instead of felt decorations, and perhaps hanging some into the centre of the wreath.  You could have a lot of fun making these to your own style.  Quick to make, easy to personalise.  Why stop at one?!?

Happy Christmas to one and all.  I hope that your Christmas Wishes come true!
Posted by Plum Cox at 13:57:00 3 comments: 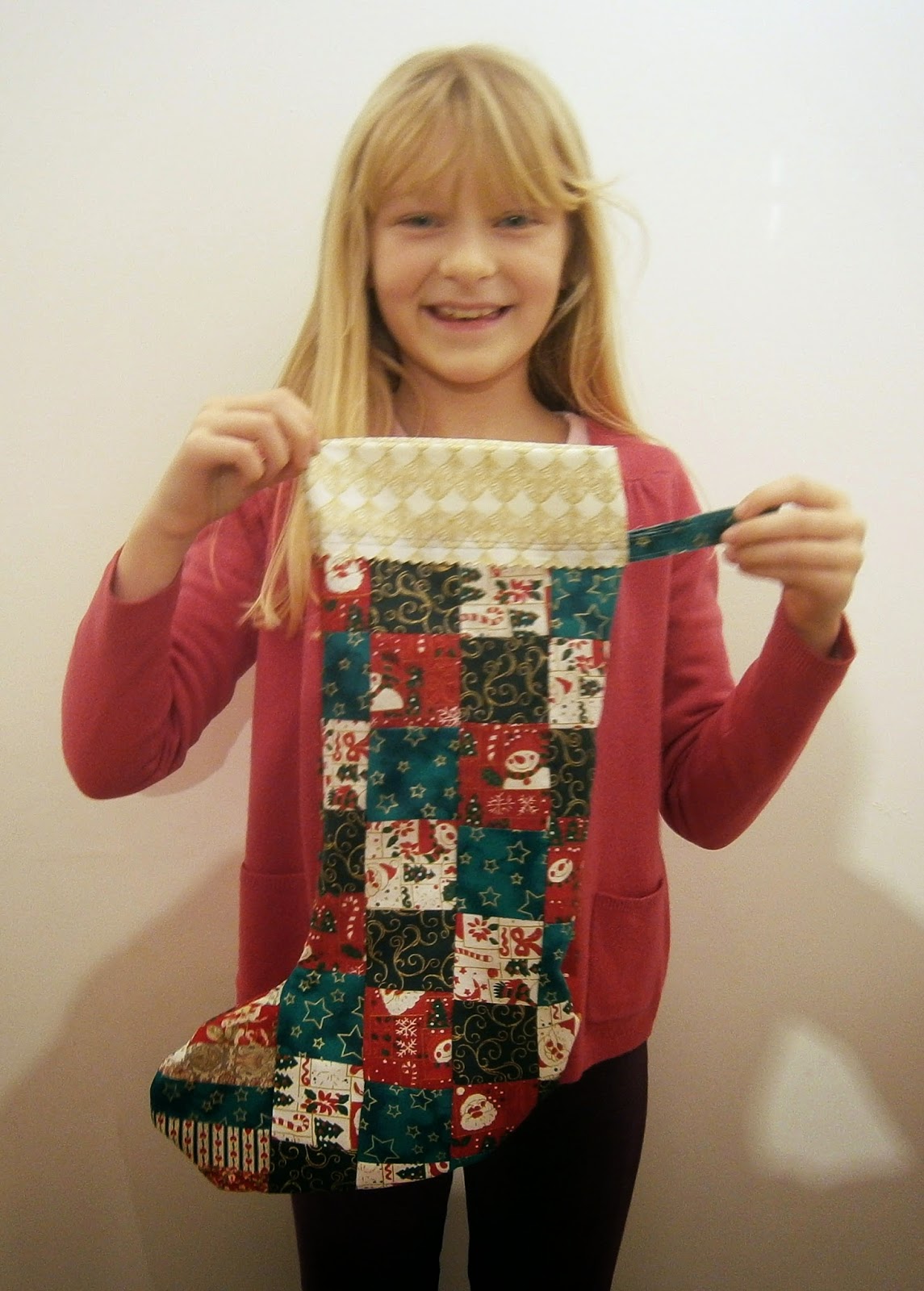 One VERY proud DD who at nine years old has managed to make a wonderful patchwork stocking!

She learnt to cut strips with a rotary cutter (not for the nervous of disposition!), sewed them together brilliantly with a 1/4" seam to make a stripy tube, cross cut them into 2 1/2" slices, and  unpicked the right short seams to make a diagonal pattern when she sewed them together.

Then she added a premade stripy toe and cuff, and, after the stocking shape was cut out, added a hanging loop as she sewed around the final seams!

What a fabulous job she's done! 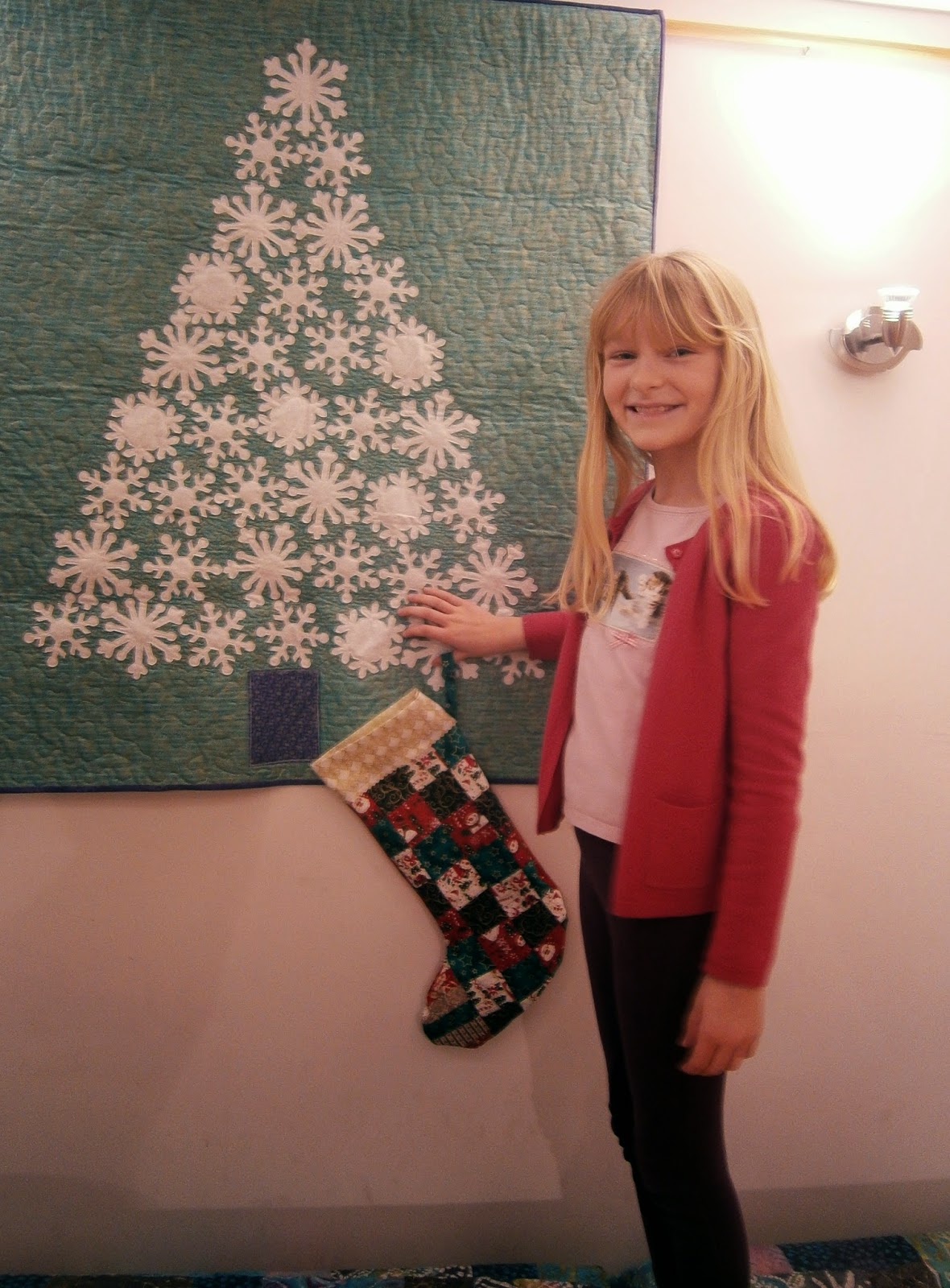 I'd be proud of this too!

I'll just have to be proud of her!

Too Busy and Not Too Busy 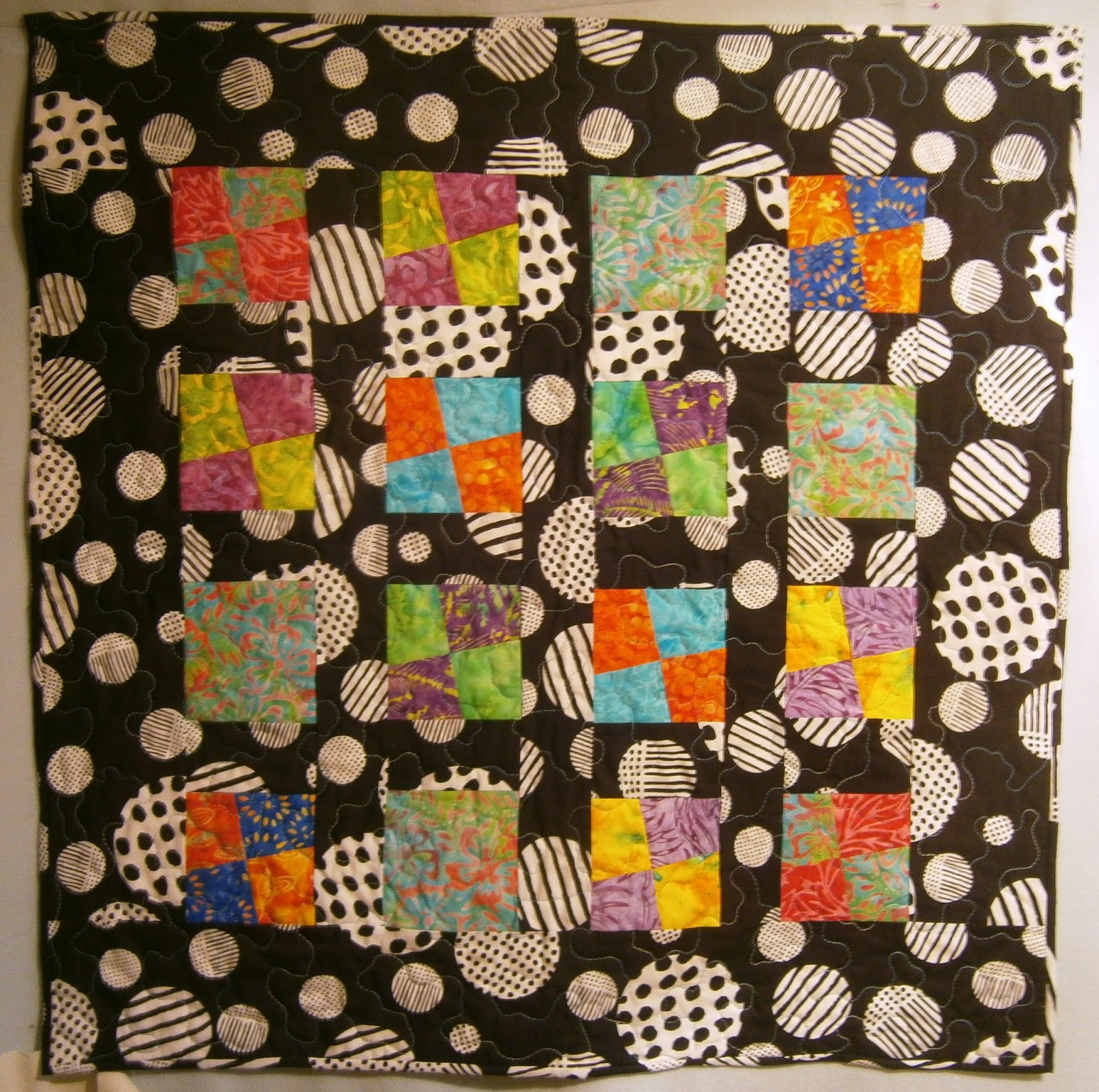 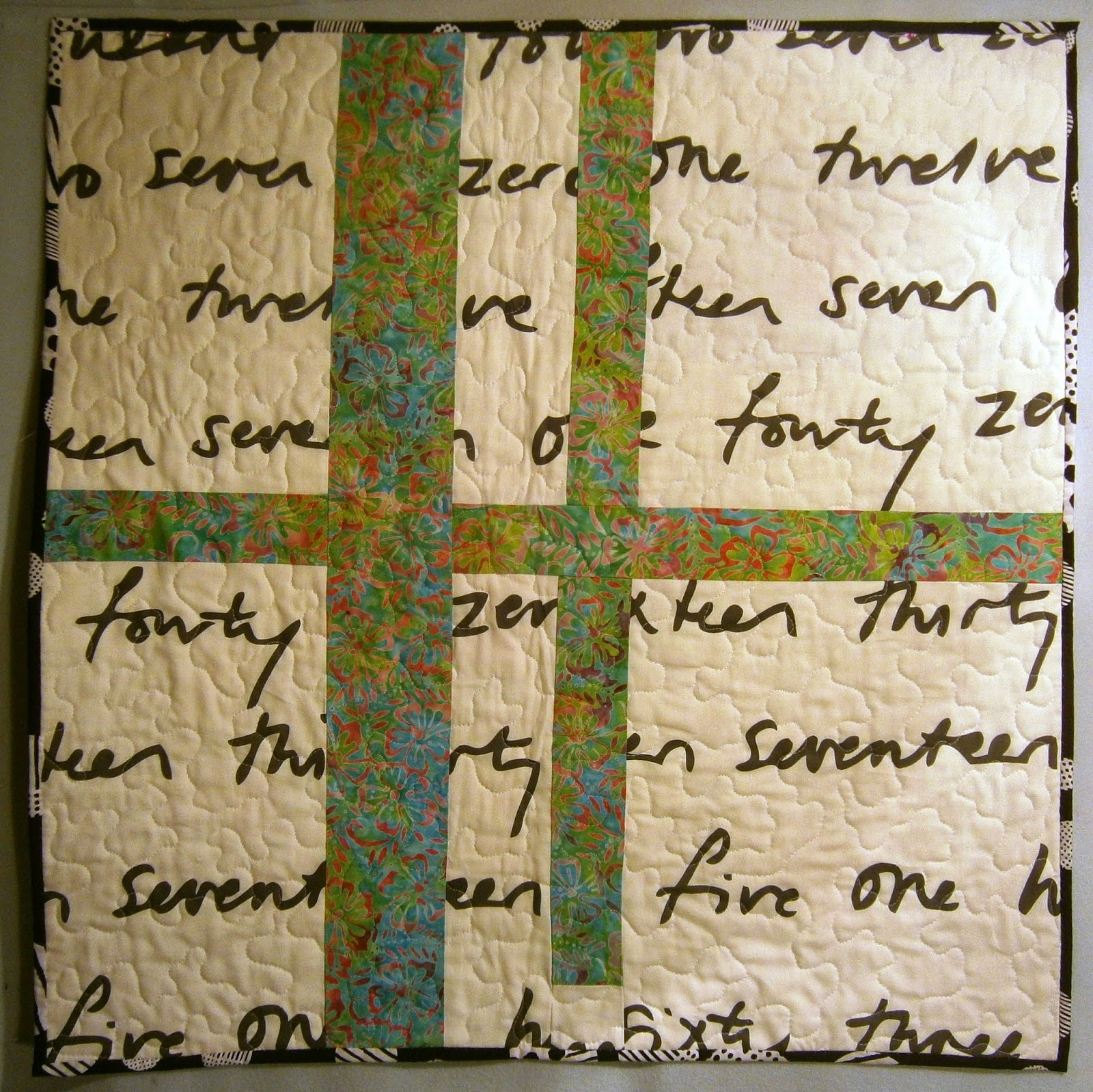 You thought I was talking about me?  Well, actually, yes, I have been rather busy - panto, festive films at the cinema, Christingle, school carol service, gymnastics display...... it's a busy time of year, isn't it?!?

What I was really talking about, though, was this quilt.  You can see what happened with those lovely Bali batik charm squares - but I really needed to find a background that wasn't going to overtake them quite so comprehensively!  The eye doesn't have anywhere to rest, which isn't what I'd really want.

Cheerful, but too busy!  The back is much more restful! 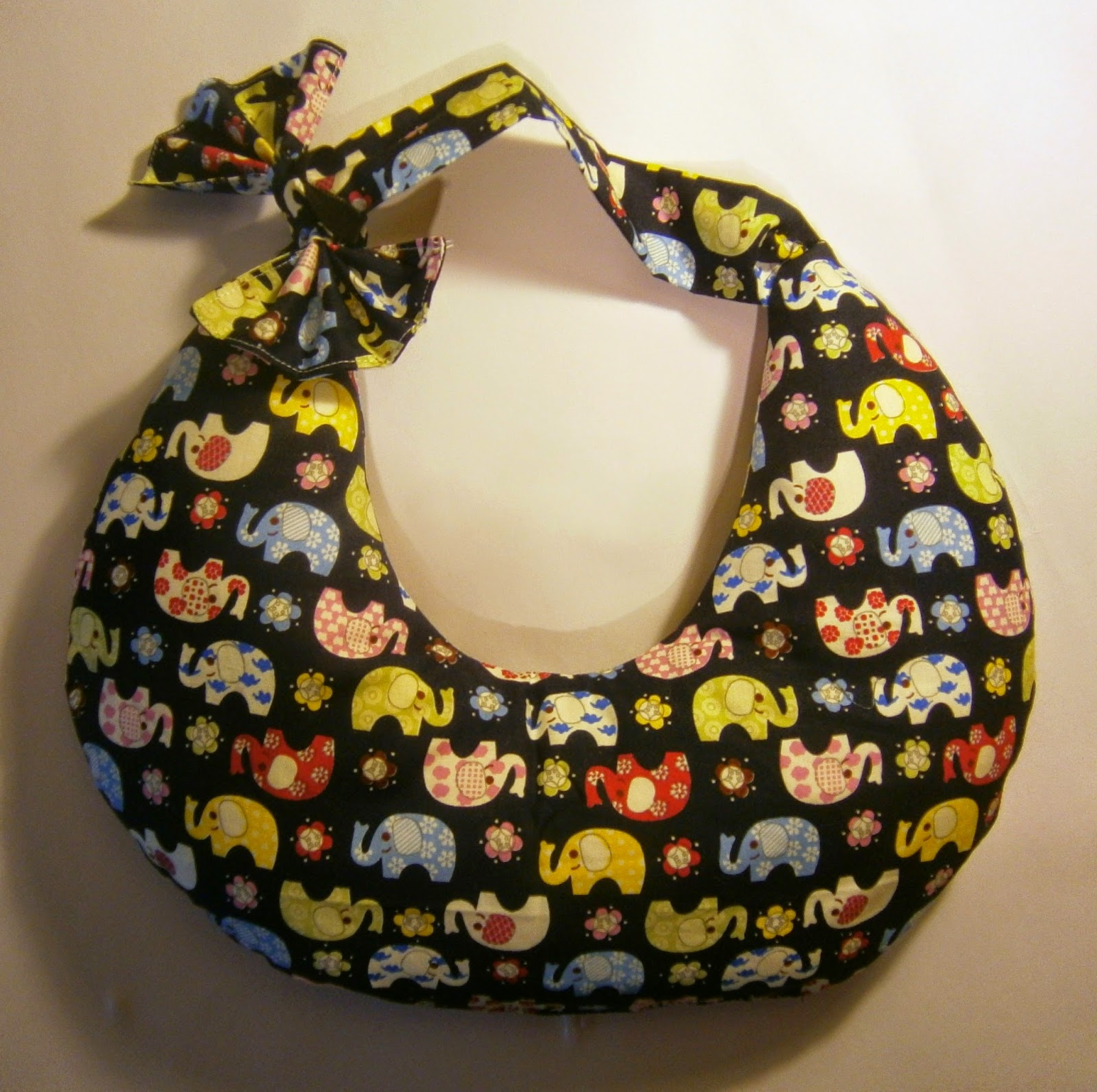 Whilst I have been busy, I haven't been too busy to make another 'anti-ouch pouch'.   A friend has been 'under the knife'  for a breast cancer op and this may help her to be a little more comfortable.

If you didn't make a note (or make one to give away!) earlier in the year when I linked to this pattern, consider making one now.  Just a little time and a little love could make someone more comfortable.  Go on, I bet that you could find 45 minutes to make one sometime over Christmas and the New Year!

This site has both a pattern and a full tutorial.

So, my 'November Quilt' has been started and finished before the binding on my October Snowball quilt has been stitched down.  Not a bad outcome (after all, I didn't think that I'd manage to make a November quilt until next year!) but I'd still like to get the Snowball quilt finished before Christmas!  I'm off to do some more stitching down now!
Posted by Plum Cox at 22:17:00 2 comments: 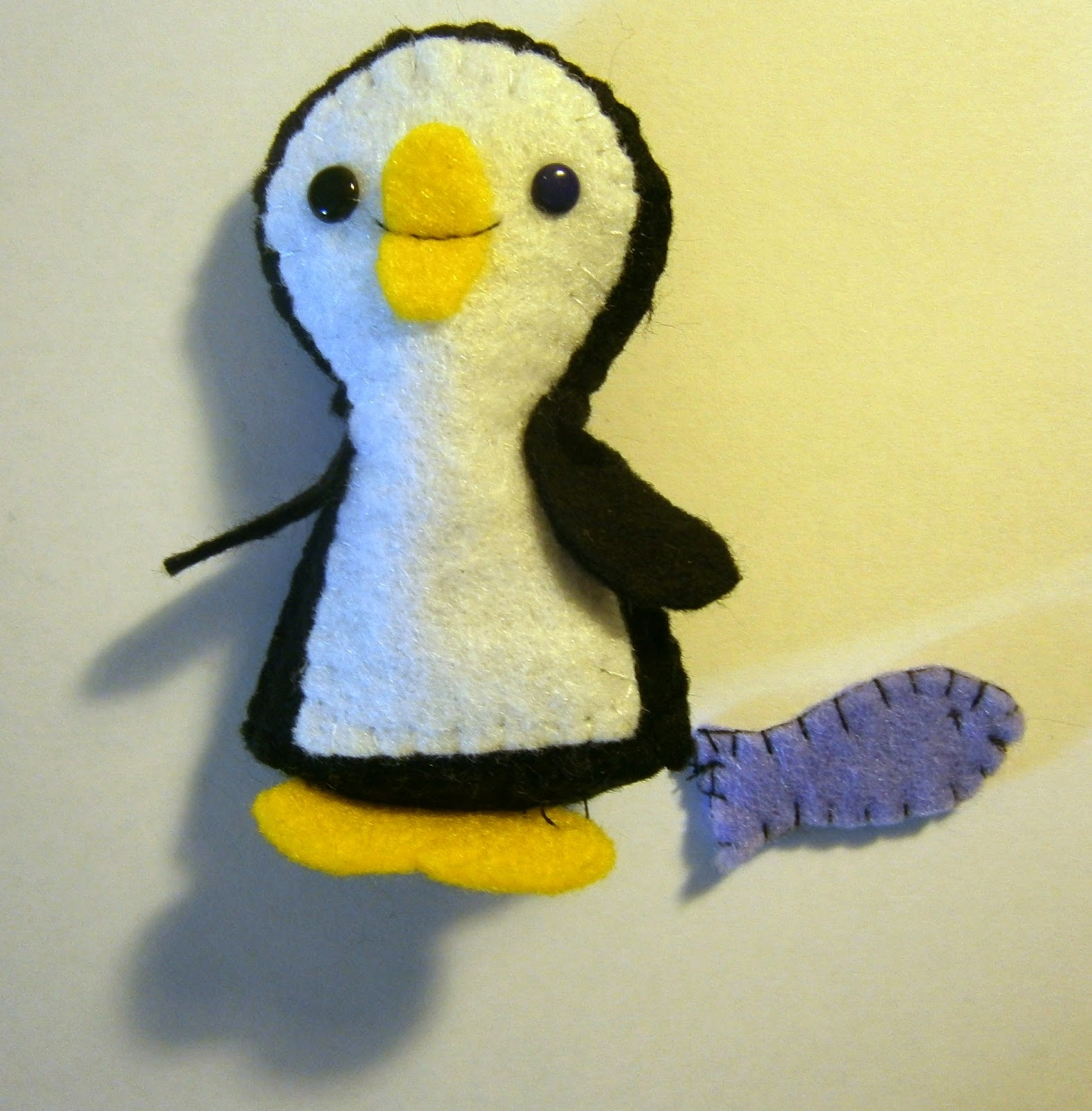 Isn't he cute?  I wish I could remember which blogger showed her one, that made me jump on to Craftsy and buy the pattern instantly - coz although not sophisticated, Stu the Penguin  (and no, that isn't a command, "Stew the penguin" although possibly the designer enjoys a pun!) is bang on trend but teeny enough to take hardly any time to sew!  Want one too?  Then go over to my little mochi and buy your own.  Comes with printables, puzzles and other accessories to sew.

So how big is Stu?  That's the joy of him.  He and his fish fit inside an Altoids tin.  Got no Altoids to hand?  Don't worry, turns out that there is a thriving market in the empty tins on Ebay - who knew?  Gotta love an auction site that lets me buy empty sweet tins.  Turns out that I could have wanted one to house a Raspberry Pi, but I didn't! 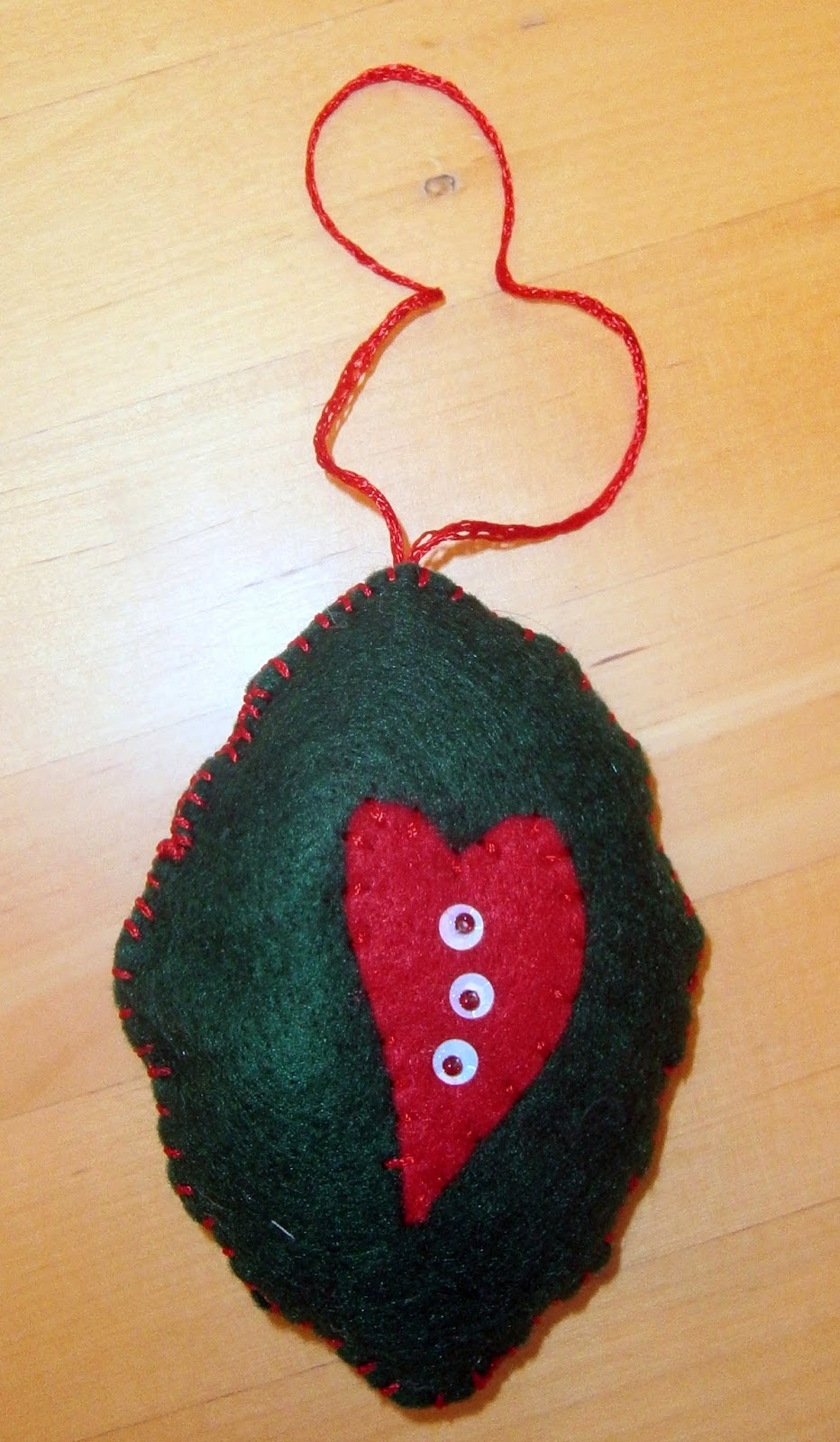 So later this week Stu will have some igloo papers printed out for him and stuck onto on the tins.  Another project that isn't quite finished yet, but the sewing part is done!

I was glad that Stu was a success - this is a photo of the hand sewing that I'd tried about a month ago.

I know.  Criminal waste of fabric and sequins!  Even my lovely DDs looked at and couldn't think of anything supportive to say!

Proof, if I should need it, that if the hands and mind aren't ready for sewing it's best to leave the scissors and needles out of reach until the planets are correctly aligned, or whatever it is that makes a difference to my sewing. 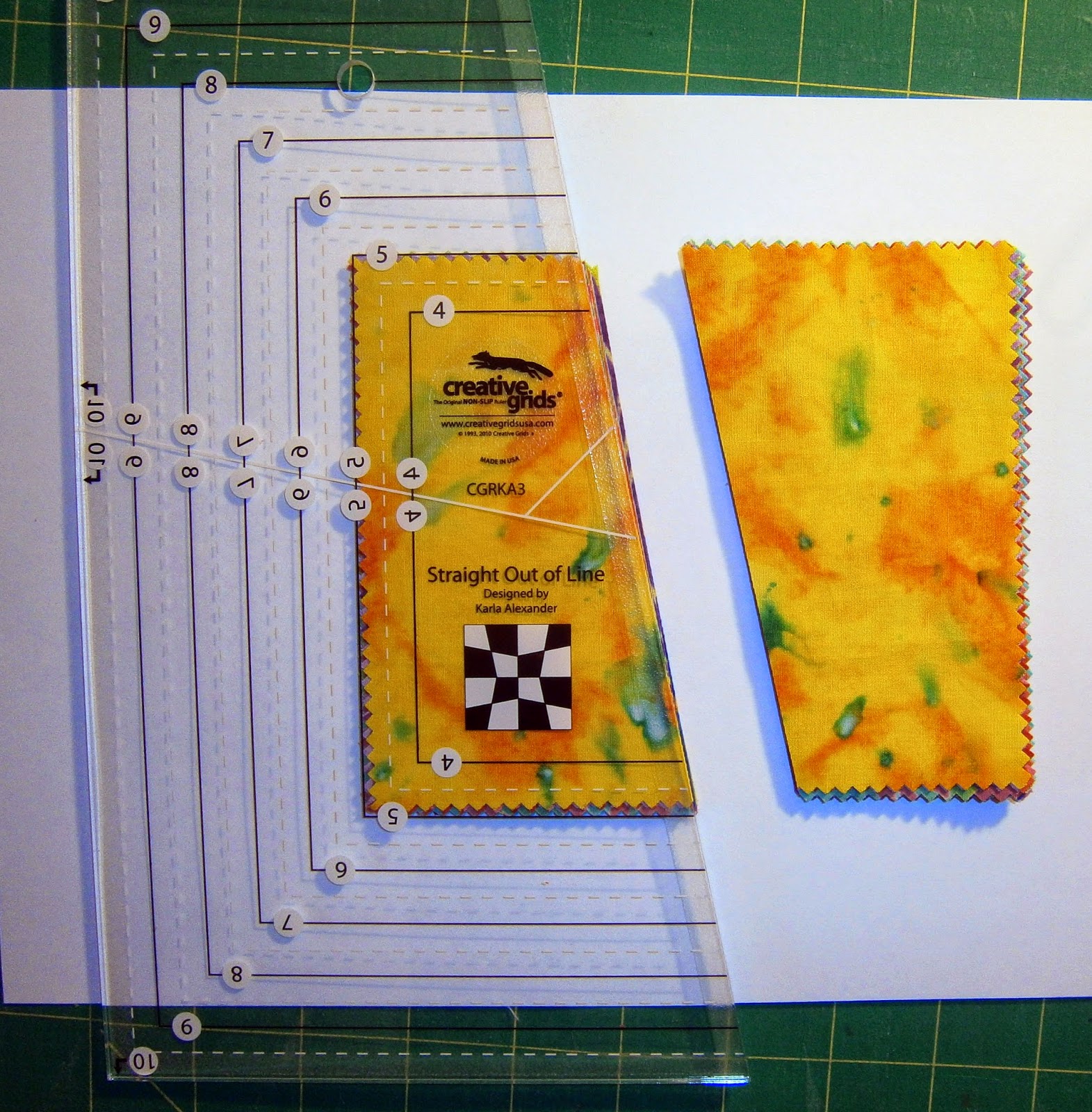 This week I'm pleased to say that I've managed a bit of machine sewing.

The obvious project to work on would be the one with the blocks already sewn and ready to make into a flimsy.  Who wants to stick with obvious?  I decided that the arrival of a charm pack and a new ruler in the same post must be an omen - so broke them both open and decided to try and make just one more little quilt before school breaks up for Christmas!

Happy winter stitching, one and all, and I hope that you are at the 'success' end of the scale!
Posted by Plum Cox at 16:38:00 2 comments: 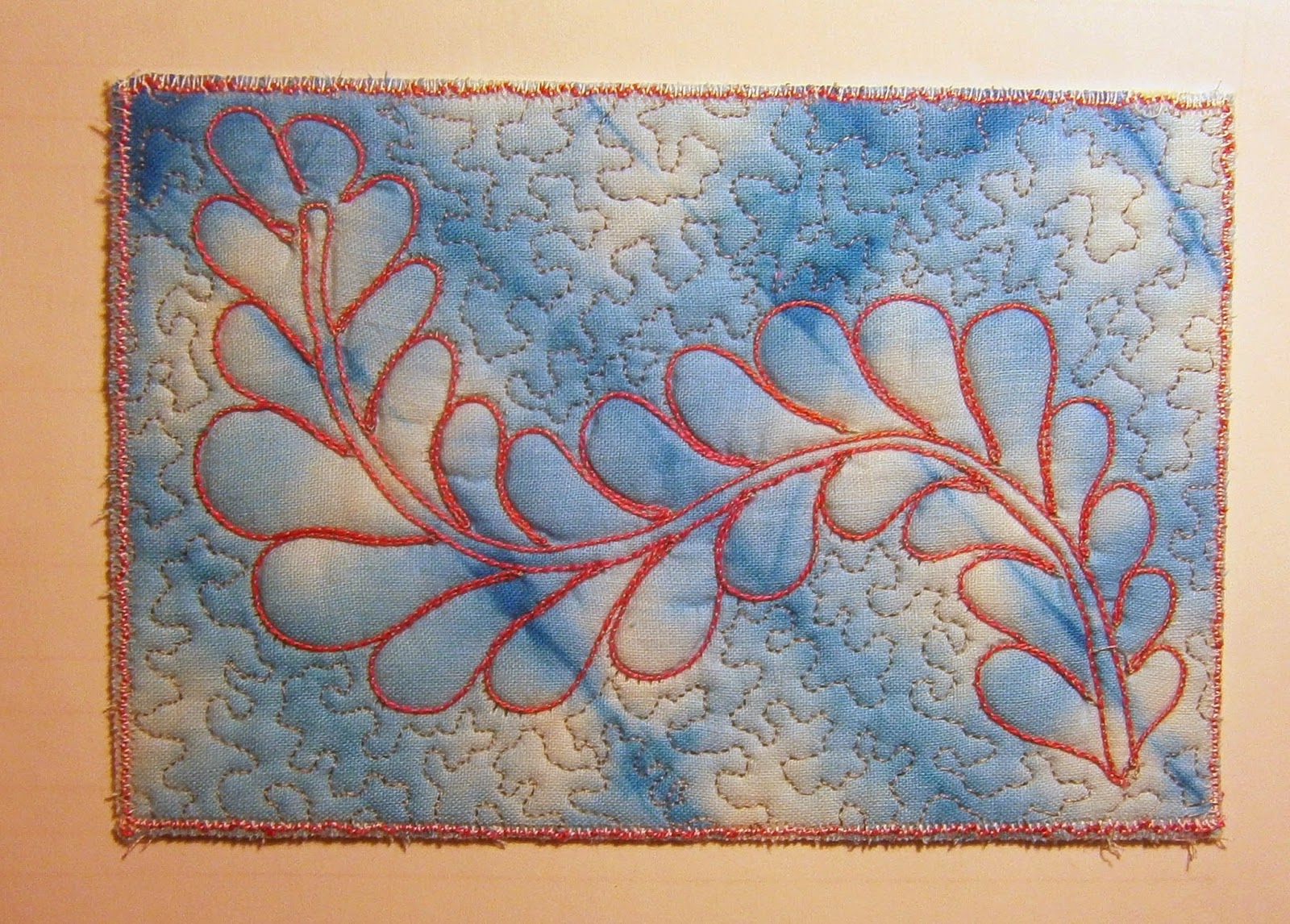 Only small bits of sewing and crafting to show this week - and all for deadlines (or at least, scheduled!) in one way or another!

The first item is the quilted postcard I made for Avril's birthday.  I used a thicker than usual thread in the bobbin and tried to stitch the feather from the reverse.....a fun experiment, and one that I'll try again.

Learning point: slow down on the wide open curves to avoid 'eye lashes' on them. 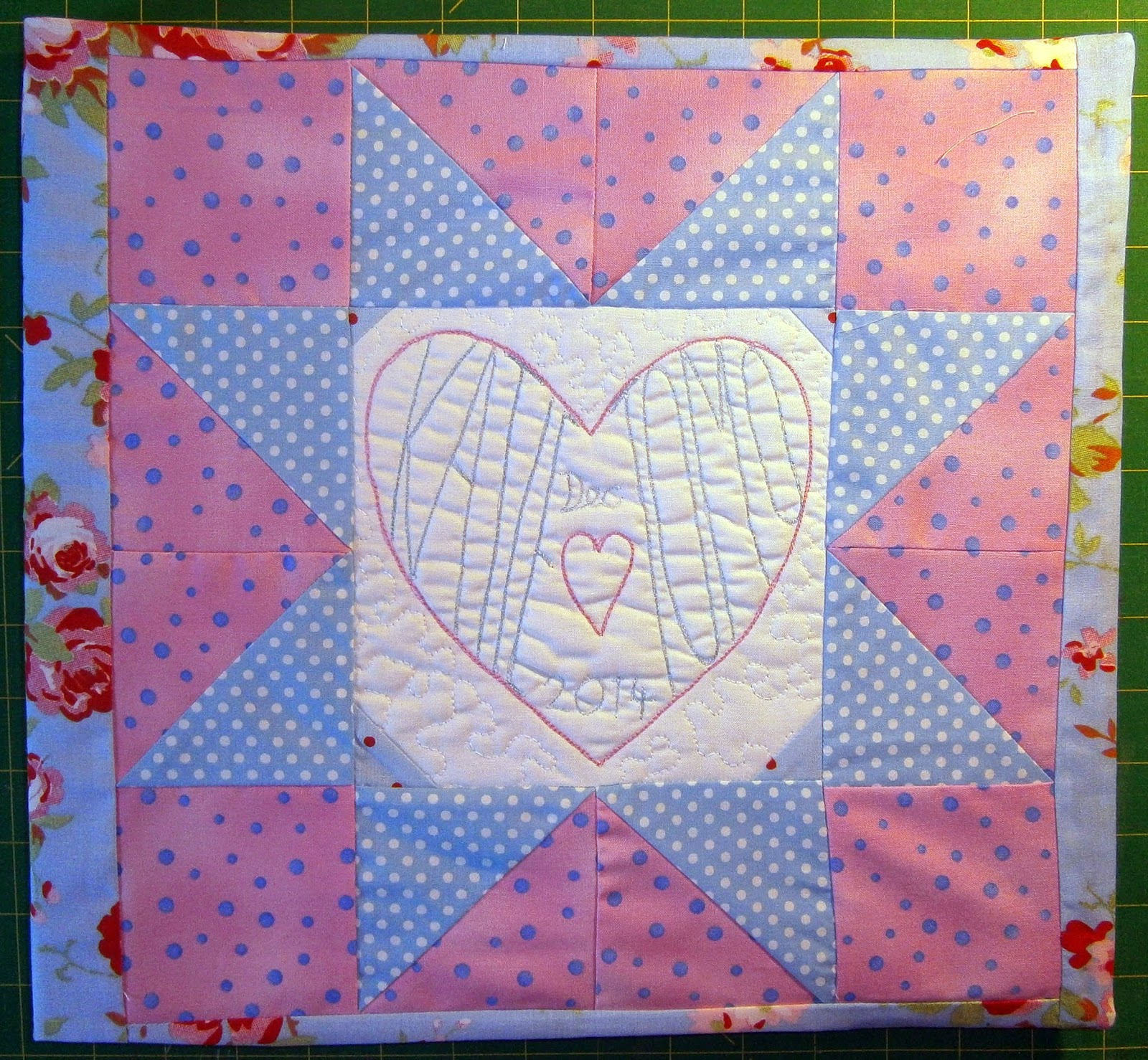 Next item to show is a slip cover for a scrapbooking album.  A winter wedding is soon to take place, so this has the bride and groom's names as well as the date and year on them.  Not a desperately complicated design, but made with love! 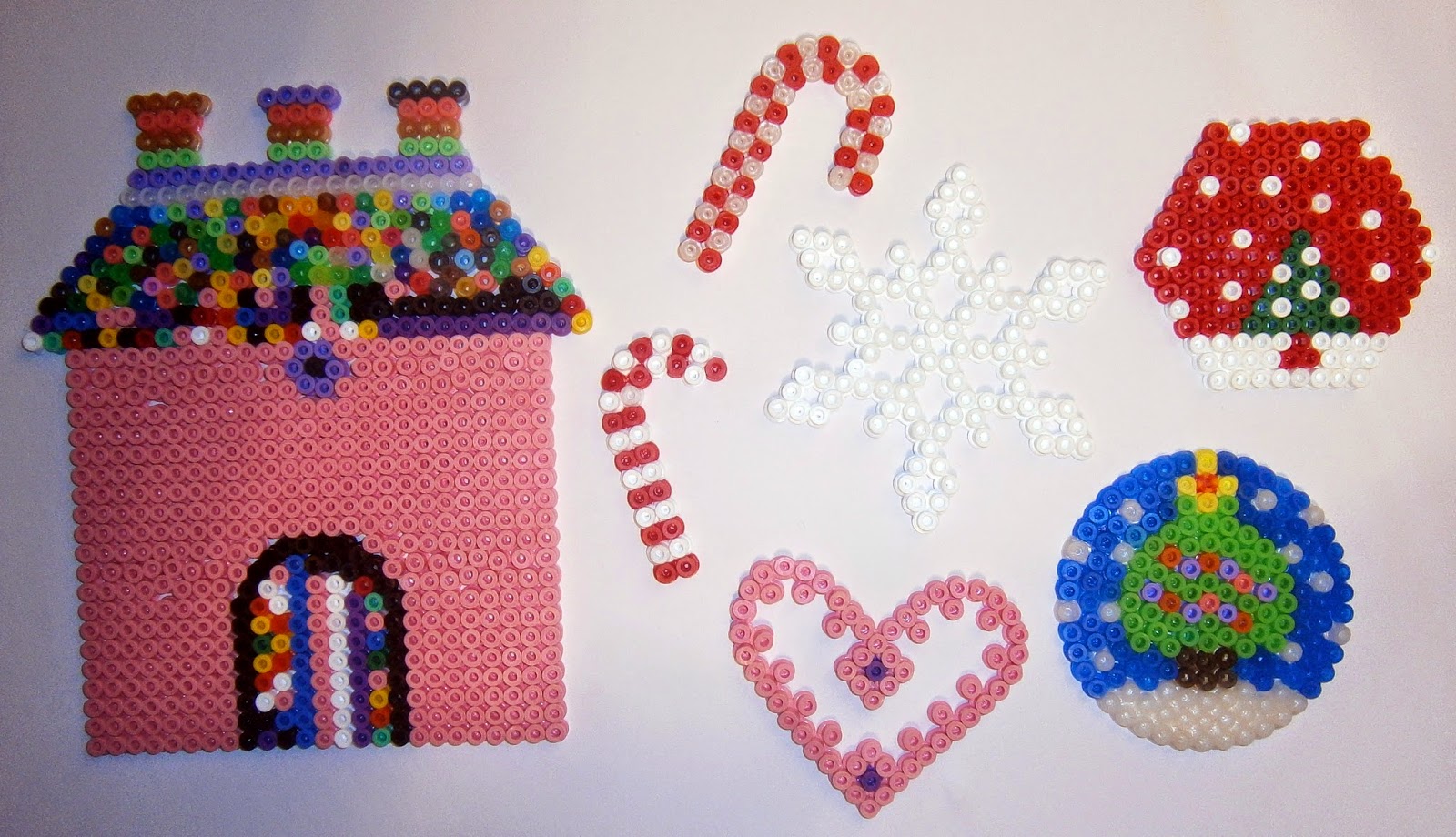 My girls and their friends had a bit of a Hama bead session on Friday.  I'd pinned a few ideas from Pinterest  which I showed to them, and they set to. 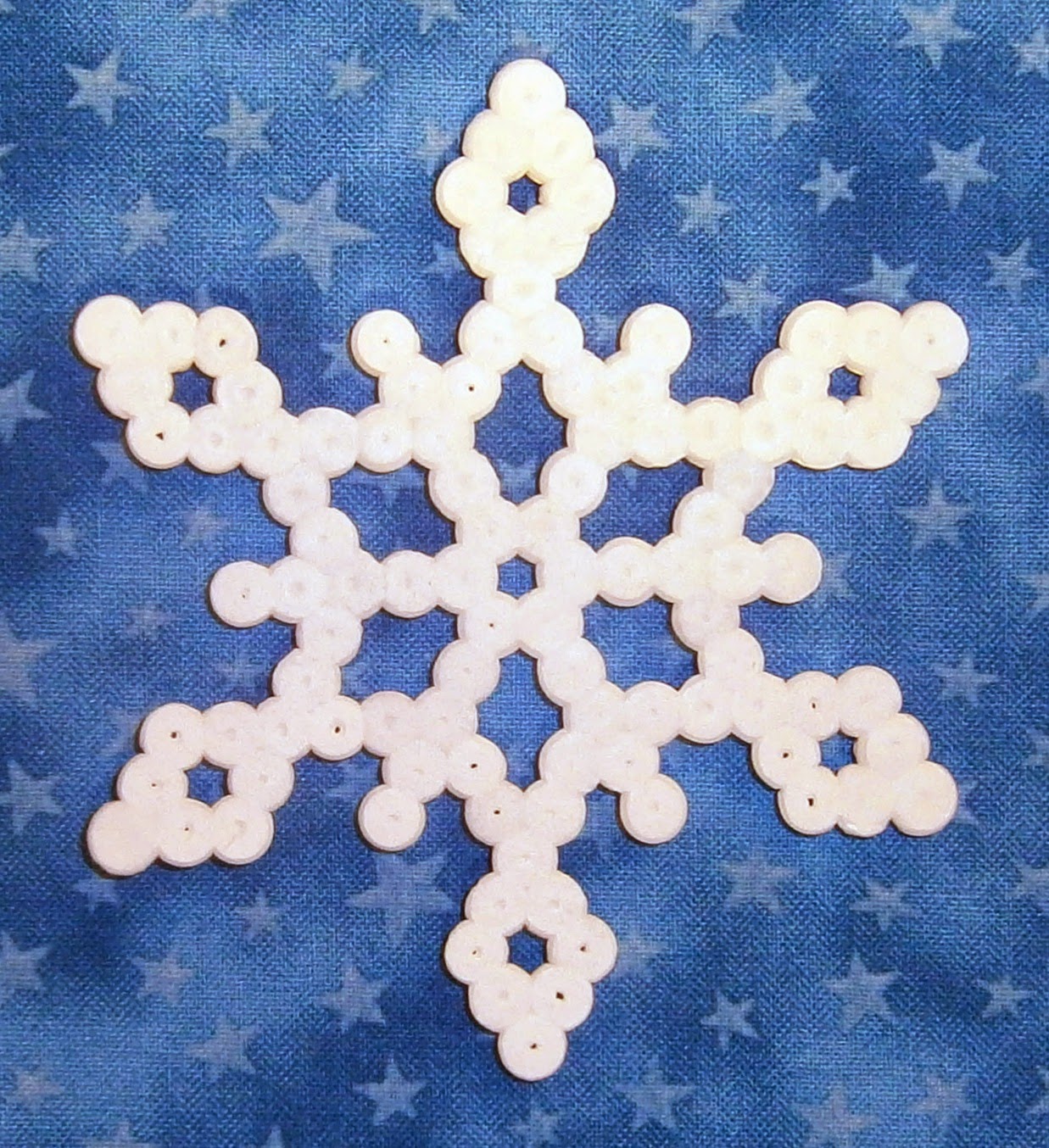 I was so impressed with the snowflake that I  took it so that you could see it properly against a darker background - isn't it a great idea?  I confess to having made a couple myself, now!

The weather has turned chilly which is just setting the mood for writing Christmas cards  so there may not be much sewing to show next week either!

Hope that the start of December is letting you find a little time for crafting and sewing too!
Posted by Plum Cox at 16:50:00 2 comments: