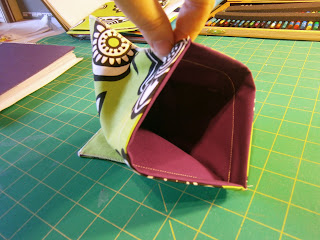 This week I've made several 'snap' bags - prompted by trying to use a metal retractable ruler that had a kink in it, and remembering that I'd seen a tip suggesting that one could recycle the unkinked part of the tape make 'snap' bags.  Much cheaper than buying snap frames, but the stitching will have to hold the end of the ruler in place so user reviews would be welcome......  so, I've decided to use our extra day this year to offer one of my extra bags to anyone who says that they would like one.  Just to give you an idea the bags are about 7" square..... Just leave me a comment and I'll pull a number out of a hat before I post again next week (perhaps with a tutorial so that you could make your own - they are quite simple!).  If you would like to have a shot at a runner-up prize of a partly used reel of variegated blue Cotty thread then let me know that.  I haven't got on with it with my machine, and don't think that I'll get through it using it for handwork! 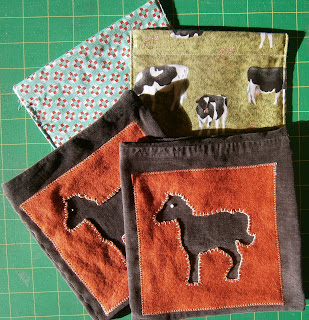 I made several in the Clothkits fabric (lovely and bright!) as birthday presents before turning to slightly more muted colours and die-cut 'waste' - destined for ﻿the craft table for my quilt group's show later in the year. 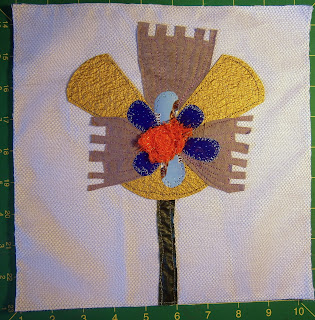 The only only other sewing I've managed is this block - machine applique using materials pulled out of the rubbish bin - cardboard, drinks packs, orange nets, colour catchers, waterproof nylon.

It's supposed to be a flower (based on a tile work one that I have a photo of) but every time I glimpse it I think that it's something to do with a mouse or a castle......  I may re-visit it!

I hope that you are enjoying your extra day this year - and if you aren't planning to use it for anything in particular, perhaps you could let me have it (or just a few extra hours?) so that I can fit in a bit more time for sewing! 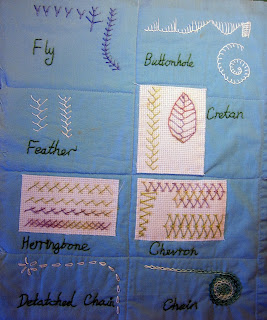 Not the best photo, but I've been taking part in TAST 2012 (Take a Stitch Tuesday).  I've managed all eight weeks so far, although I have to say that I'm not producing particularly imaginative or complex samples!  I am, however, trying stitches that I've never tried before, and recording the odd one or two that I have tried before.  This is my first page of  I hope will become a sample book by the end of the year. 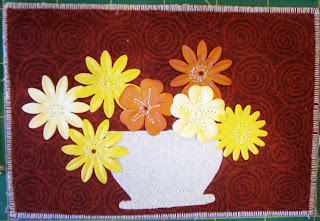 This was the only other sewing of the week.  A card for the postcard swap that I'm part of, with a theme of flowers. 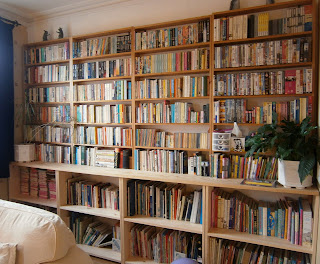 My DH has been MUCH more productive, though - welcome to Library Wall!  We had a couple of  tall shallow book cases here before, but he moved shelves around and added an extension onto the front of the lower shelves to accommodate our larger tomes, and now we have this.  Didn't he do well?

Completed in the nick of time - our new sofas arrive in just a few days! 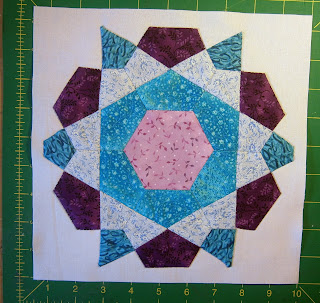 Isn't this a pretty block?  I followed the link to SummerFete for a tutorial to make this rose star block ( I found it through  SewKalico's blog (and look, aren't her roses lovely?)

It reminded me of the Islamic tile patterns that I've been looking at over the last couple of weeks, so I decided to make just one and applique it to a background - not going the whole hog and signing up to a quilt full of them, lovely though I'm sure it would look!


Meanwhile, my bloggy friend Benta found that a photo of one of my other blocks for my C&G course had been published in Popular Patchwork, quite unbeknownst to me!  I haven't secured a copy of the magazine yet (my helpful local newsagent has ordered it for me though, so I'll only have to wait until tomorrow), but you can see the evidence on Benta's blog here.

I'm also just about keeping up with the basics on TAST (Take A Stitch Tuesday) - but I forgot to take a photo!  Next time I'll try and remember (and I'll have added the Chevron stitch for week 6 by then too, I hope - another stitch that is new to me.

Nearly half-term, which means nearly half way through the school year.  I have no idea how time flies past so quickly!  Happy holidays, one and all!
Posted by Plum Cox at 18:44:00 4 comments: 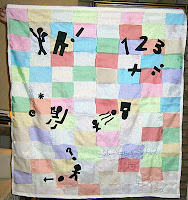 Not much of my own sewing this week, but I spent a few hours helping out with DD1's year group during their 'Maths and Art' week.

The day that I helped they were looking at Paul Klee and how he used shape, symbol and colour.

Each of the two classes made a wall hanging, using voile rectangles for the background (plenty of spray adhesive on the backing fabric first) and then designing and placing symbols to represent either their school or Twickenham. 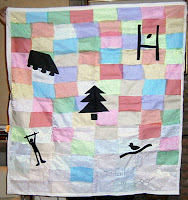 I think you'll agree that they did a stunning job!

I can't say that they are my best work (I sewed everything down to secure it) but as they are only likely to be on display for a few months I thought that I'd probably done enough to hold it together for that!

The children were very enthusiastic and engaged in the whole process, which was lovely to see. 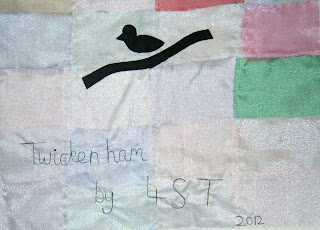 I wonder if I could go back to school to get handwriting classes, though.  I stitched this 'freehand' on the machine, and probably should have drafted it in pen first - although that wouldn't have made the writing any better, as despite being a larger scale, it still resembles my writing when I was about eight years old (and trying hard to be neat, just like I was on this!) 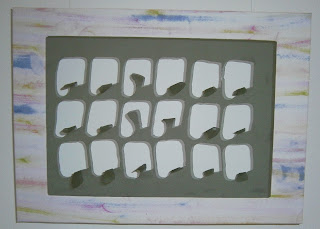 My own sewing has taken a back seat, with time and energy devoted to the hangings, but I did cut loose with my soldering iron to try out a piece for my C&G based on a shape that I'd seen on a tractor.  I really liked the flippy-floppiness of the voile, but it really doesn't photograph well - if you look at the detail shot below you can see that I couldn't get the lighting right - as soon as I moved it away from the wall to allow the fabric to flop about I was faced with shadows, which from a distance just make the whole thing look out of focus.  A bit of a shame, as it does look better than this in real life, honest! 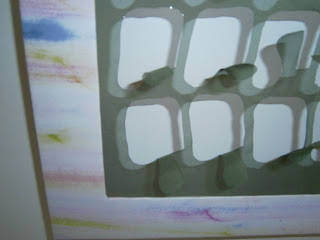 I'm planning to try another piece with the shapes that were cut from this grid - more next week, perhaps!