Handling Quilt Round Up 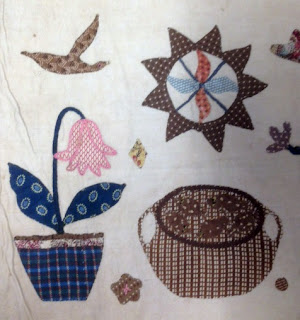 You remember that I'd had a lovely look at the Acton Top, prior to its planned outing in a textile related museum season at Gunnersbury Park Museum?

I thought that it would be fun to round up three photos from the original cover, and then show my versions of the same part, made into handling samples.

This is the flower and pot (well, almost - I think that mine was actually based on one from another spot on the quilt!) that was on the original. 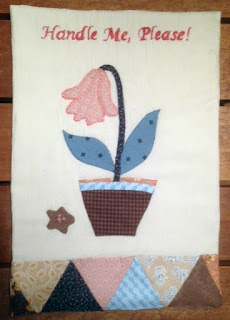 This is my version, complete with chain stitch details.  I gave it a base of triangles as otherwise it seemed to be floating away in the middle of nowhere in the size of handling sample that we'd been asked to make. 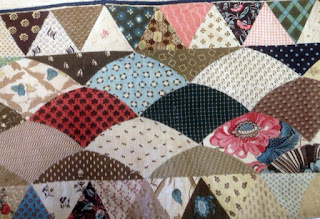 Here are the clamshells with their triangle border.

They are a flatter version of the shape that I used. 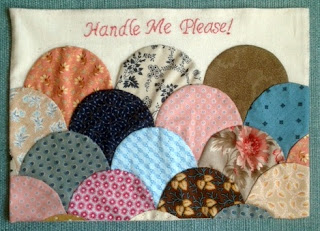 You can see my sample here.  The width is the same, but the shape quite different.

I've used a random medly of fabrics just like the original did, in order to keep it interesting. 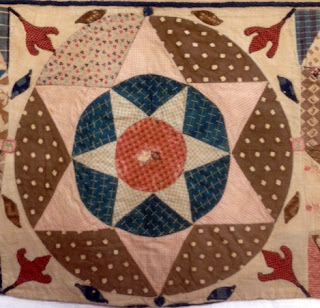 Finally one of the lovely paper pieced 'ball' motifs.  I'm not sure whether the 'odd' patch was original or was a later repair for a damaged patch.

It was fun to make the fairly simple pattern for the paper piecing. 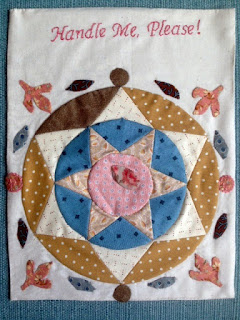 My version.  I could do with more delicate flowers to applique in the central circle.

The odd plant stems coming from the corners were really tricky to applique with the needleturn technique - those inner returns were awkward, and I think are likely to be the parts that will suffer most in the handling rough and tumble.

I added my initials to the pink circles, though, just like it looks as though the maker(s?) might have done on the original.

So, there you have it.  My handling samples complete and ready for action!
Posted by Plum Cox at 07:00:00 2 comments: 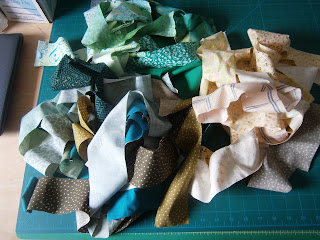 I had a pile of green and pale yellow with a few brown FQs (well, mostly partial FQs if I'm honest!) out, remains of a fabric pull for a Meadowlands quilt that I made a few weeks ago.  Lots of 'nature' colours and prints in there.

I decided that I didn't want them to go back into my FQ stash, so I'd better make another quilt with them. 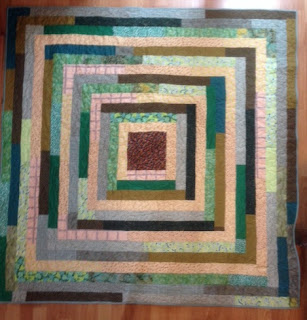 I cut the fabrics into 2.5" strips and joined them in three colour families (although really I just made two piles of the greens, they weren't particularly differentiated - but the pale strips were kept separate).

Then I chose an 8.5" square and set off sewing the strips around it until I either ran out of strips or reached the size that I wanted.   Luckily for me they happened at about the same time.  I've got a 60" square, and only had a few inches of strip left over. 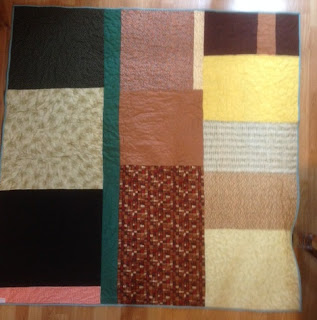 The bowns and a yellow FQ that hadn't made it into the front edit were then patched together to make the back.

I had to add a few inches of one fabric that I wasn't in the original pile, but it pretty much worked out OK without any more stash raiding. 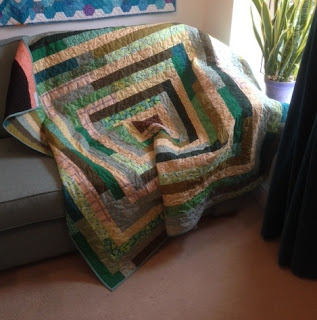 Simple quilting, a plain green binding to finish it off, and we're good to go! 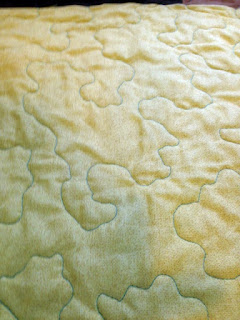 Simple quilting to hold everything together in case of robust use! 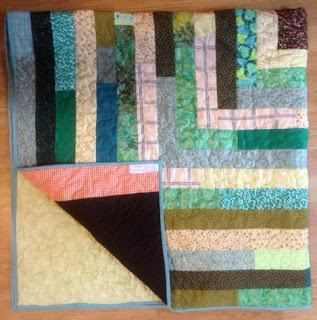 Shown here with the corner flipped back.

This was so much fun to make that I'm tempted to pull out more FQs and start another one!
Posted by Plum Cox at 07:00:00 2 comments: 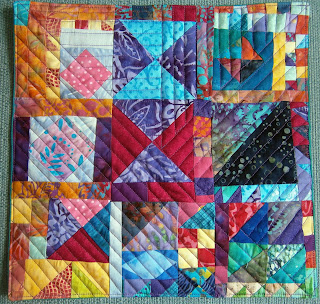 Another couple of projects to reduce my scraps!

These were left over scraps from my big 365 project from a while ago, that had been sitting in a little caddy on my sewing table, begging to be used.

I realised that part of my reluctance was that I had these little fiddly scraps, and a few larger ones.  Once I'd realised that I just needed to split the two different families apart, things were much easier! 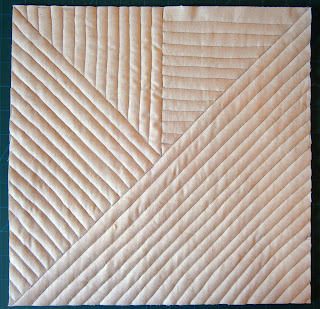 This first scrap happy item used the tiniest blocks and parts of blocks that I had, with a few other scraps used as fillers.  I made each of the nine blocks up to 4.5" square, arranged them as a nine patch and sewed them together.

I didn't want to try too much detailed quilting as there were so many thick bumps where the tiny patches were joined.  This is the back, before the 12" square was made into a cushion cover. 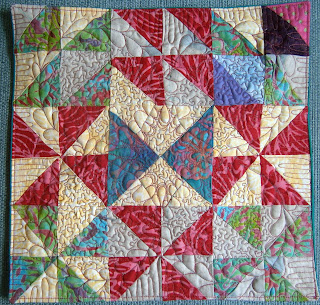 This mini used up the larger pieces that I had in the same caddy.

All pretty varied, but again, made into a nine patch and sewn together to finish at 12" square.

I thought that my machine would take to quilting this with more detail, and it did.

I used a handy CD to draw around with spray away pen to give me the start lines for my feathers and bobbles, then I had fun with the small scale stipple in the central areas, and a loopy line around the edges. 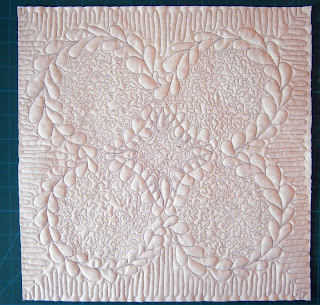 Another mini that I've turned into a cushion cover.

If I could just come up with a good plan for using my old colour catchers I could make even more progress, but I haven't found exactly the right idea for using them yet!  All suggestions welcome!
Posted by Plum Cox at 07:00:00 1 comment: 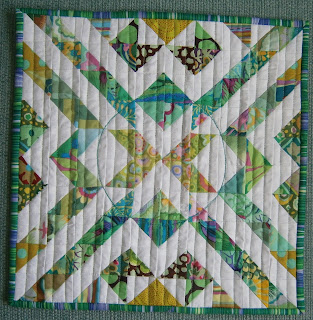 It was time to pull some scraps together.  These were left over HSTs from the Pecking Order quilt that I made a few weeks ago.

It was fun deciding on a layout for them all.

This 10" square mini quilt was the result of all those 1.5" squares. Lots of fun to make and quilt. 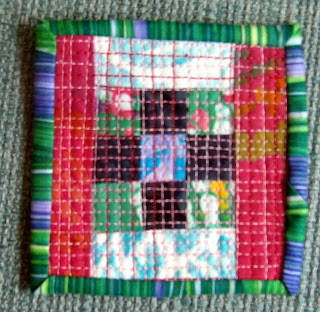 Then I went for the 'very small' quilt - this is just 3" square.  I think that I should be able to make the binding even narrower to get a better effect with it in better proportion.  I may yet decide on future tiny quilts to use a less traditional type of binding.

It is quilted at 1/8th" with a variegated thread.  I'm not sure that the quilting really enhances the front. 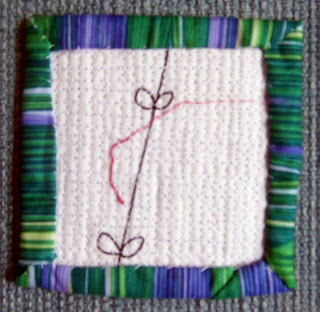 The unexpected treat was the reverse, though!  The detail from a large print (thanks Ikea!) was just right, and set off by the serendipitous accidental thread that drifted across the back as I was quilting it.

I prefer the back!  Of course, the binding is even more oversized that it would ideally have.... a learning point for future projects!
Posted by Plum Cox at 07:00:00 No comments: