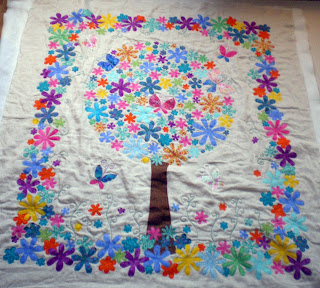 I'm finished sewing on the flowers, I've stitched the green grass or vines, and I've spray basted the top and wadding onto the backing..... and I'm quite happy with the progress so far. I just wish that I'd sewn down just the flowers on the tree, then re-basted, and then sewn down the flowers around the border. I'm concerned that I have an awful lot of spare fabric in the open areas (just look at it in the photo!) that I'll need to 'eat' somehow in the quilting.

I think that I'm more concerned that I don't know why it's there. Obviously I know that one would usually quilt from the centre out to the sides, but this looks like it's stretched in the open areas. Either I didn't baste sufficiently or I shouldn't use 'linen mix' fabric bought from a previously untried source on the web or....I'm not sure? Wish me luck with the quilting!
Posted by Plum Cox at 14:28:00